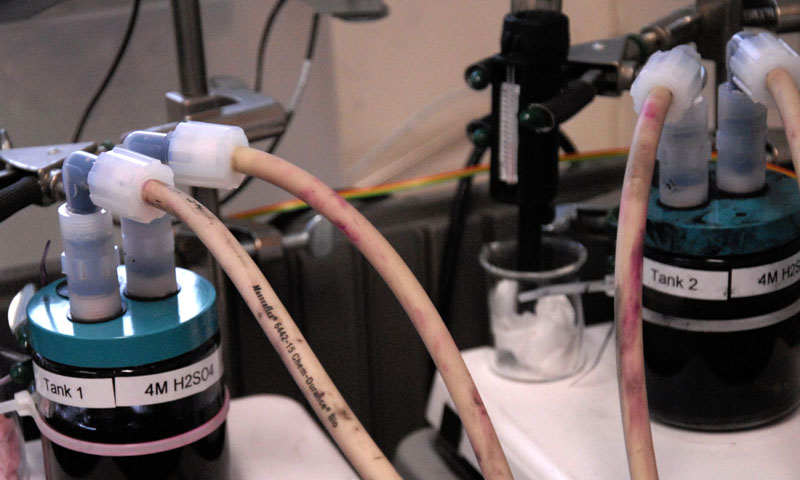 A lead-acid chemistry based version of “Cambridge Crude,” an electro-active material composed of negative and positively charged particles supsended in an electrolyte solution.

Students and faculty at the Naval Postgraduate School (NPS) are planning to design and build a battery using technologies that have already been called a potential game-changer.

U.S. Army Capt. Andrew “Drew” Johannes of Stillwater, Okla., along with thesis advisors Assistant Professor Sebastian Osswald of the NPS mechanical and aerospace engineering and physics departments, and Visiting Professor Joseph Farmer of Lawrence Livermore National Laboratory, have begun working on a Semi-Solid Flow Cell (SSFC) battery, which they believe has the potential to radically change the way the military powers everything from forward operating bases in Afghanistan to warships at sea.

Johannes, currently pursuing his doctorate at the university, came to NPS after spending a year building combat outposts in Afghanistan.

“I am an Army combat engineer by trade. I was building FOBs [Forward Operating Bases] in Afghanistan in 2004 and 2005,” said Johannes. “We spent more time trying to sustain ourselves than anything else due to the rough conditions.”

As his studies progressed, Johannes became intrigued by SSFC technology, envisioning its application in a power system that could significantly cut down on FOB logistical requirements, and reduce the energy footprint and noise signature produced by large generators.

“There are basic energy requirements for a base. The Army runs on generators, they are loud and they often run all night,” said Johannes. “What if you could have an energy storage mechanism where you could run generators during the day, but turn them off at night and still have power?”

The SSFC battery system in development could make this a clear advantage for FOBs a reality, allowing the bases to maintain a more tactical posture at night. Its implications to Navy ships are just as advantageous, allowing for efficient energy storage that can be used when needed to power critical ship systems.

What makes SSFC batteries work is a substance cleverly dubbed, “Cambridge Crude,” because of its development by researchers at the Massachusetts Institute of Technology (MIT). Initially created at MIT utilizing lithium-based chemistry, the NPS team sought to utilize a similar concept, but based it on traditional, low-cost battery chemistries, such as the lead acid or nickel metal hydride found in the majority of batteries used today.

“We are using a different chemistry than the Cambridge guys, which requires different hardware and a modified design. They were really shooting for the moon, we are essentially dumbing things down to create a simpler application,” said Johannes.

“We have been using lead-based batteries for a very long time … lead is cheaper, safer and it’s known … To put it in automotive terms, you don’t always need a V6 to get the job done when a V4 will work. And the V4 is also more affordable to a larger crowd, and requires lower operating costs,” he added.

Whether based on lithium, lead or nickel, the crude is an electro-active material, part liquid and part solid, consisting of small pieces of battery anodes and cathodes suspended in an electrolyte solution. When this slurry of positive and negatively charged materials flows over an electrode, electricity can be stored or created. 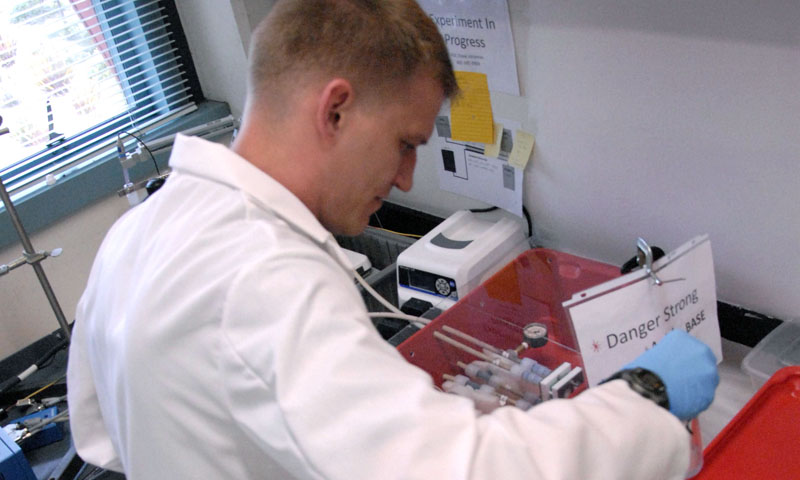 While giving credit to their colleagues at MIT, the NPS team is confident that the low-cost battery chemistries, like lead or nickel metal hydride, are excellent solutions for medium-to-large scale applications.

Beyond a new method of energy storage, SSFC technologies are also much more efficient as well, especially when the batteries are not in use.

Traditional lead acid batteries degrade over time because the lead and lead dioxide inside the battery are in contact with the electrolyte solution, Johannes says. When not in use, both electrode materials react with the electrolyte to form lead sulfate in what is called a self-discharge process. The consumed materials are then no longer able to produce electricity when needed.

SSFC batteries have the potential to overcome this problem by giving the engineer flexibility to separate these components.

“With an SSFC, you have access to what’s inside the battery, they are not just these sealed boxes that you throw away after their cycle life is up. You can engineer your batteries so that you can get inside, separate the materials or add materials as needed,” said Johannes.

This separation of materials can extend the life of the battery and allow researchers to adjust levels to meet specific energy requirements.

Efficient energy on the battlefield is one of DOD’s most pressing issues, and the implications of the research are enormous. But researchers say the possible applications for SSFC battery technology go far beyond traditional military operations.

As an example, Johannes noted, storage grids play a critical role in managing the ebbs and flows of energy demand, allowing power officials to increase power onto a system during peak demand, or store the energy generated during low demand. SSFC technology’s highly efficient storage properties are a perfect match for storing that excess energy.

“This technology could be used on medium to large power storage grids. For example, you can collect a lot of energy at a wind farm in Oklahoma, but how do you store the energy? This technology allows you to ‘load level’ and use the energy when it’s needed,” said Johannes.

In addition, one of the most unique characteristics of SSFC batteries is that, unlike solid cell batteries that wear out and must be replaced, the SSFC electrolyte crude can simply be flushed out and refilled with new material.

Imagine a future “gas-station” where you could pull up in a completely electrical vehicle, Johannes says. You plug in a hose that sucks out the depleted oil-like substance and replaces it with a fresh batch … Five minutes later, you’re on your way.

And the used crude is not waste, he notes. “The spent material could be recharged at the fueling station and pumped into another vehicle,” said Johannes.

If successful, the team believes Johannes’ work could overcome common obstacles to electric car usage, such as the inconvenience associated with recharging spent batteries, and the vehicle’s limited range.

Whether or not Johannes and his SSFC batteries are successful in generating momentum in military applications remains to be seen, but the work of the researchers at MIT is gaining a lot of attention. According to Darren Quick at Gizmag, the Cambridge team is going commercial, and has already raised $16 million in venture capital.