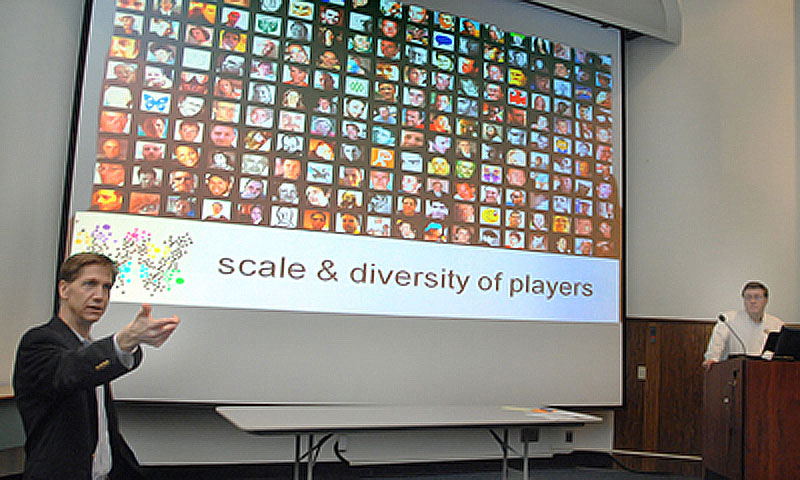 Despite its lengthy title and awkward acronym, the Massive Multiplayer Online Wargame Leveraging the Internet, or MMOWGLI, has garnered increased attention in recent day as policy makers have leveraged its ability to encourage discussion and crowdsource solutions to complex problems. MMOWGLI games are currently exploring issues as diverse as naval energy policy, combating piracy, and even copyright infringement..

“The platform is designed to support large numbers of distributed global players working together on idea generation and action planning, with an eye towards surfacing innovative outlier strategies,” said Brutzman. “There is nobody else going to this [crowdsourcing] extreme, on our first day we had 200 people playing simultaneously.

“NPS drew on its broad knowledge of worldwide naval operations as well as its deep capacity in computer science to develop [MMOWGLI’s] new gaming software. It uses a web-based architecture, building on an open-source platform that can test the limits of its new online environment,” said Brutzman.

MMOWGLI program manager Garth Jensen is credited with the vision behind the original MMOWGLI wargame.

“I was working at the Pentagon as a bridge between science, technology and the warfighter. I noticed that when people thought they had a game-changing idea, they would bring it to the Pentagon in a notebook or Power Point presentation and that they would lose the end user before they even got started.

“At that time, I got turned onto the notion of massive multiplayer games and citizen science. While working with the Institute for the Future, a flash bulb went off in my head. I considered how we generally wargame with just a few people in the room, and extrapolated that model to a massive group of payers. What it eventually turned into was a platform, beyond basic wargaming, where people could participate and ‘democratize innovation,’” said Jensen.

Jensen and his fellow researchers at NPS, in collaboration with the Institute for the Future (IFTF), jointly developed MMOWGLI some years ago, but NPS researchers have expanded upon the game’s earlier goals. They have designed extensions and wrote code that creates what Brutzman calls a “robust multimedia environment for collaborative strategic planning.”

“We get a lot of ideas out and then we bring them back together … Players can participate without having to leave their day jobs,” said Brutzman. “We are trying to capture human dynamics in ways that work on the web.”

Players can also participate without having to reveal their identity. One of the allures of MMOWGLI is its anonymity. Players generally respond to specific or general calls to action via social media, but they remain anonymous and can speak their minds with impunity.

The MMOWGLI game is message-based. Players, like Twitter users, present their ideas in 140 characters or less on a series of “cards.” The game is played within the host web browser utilizing a high-quality user interface which makes it possible for game players to collaborate without having to worry about software downloads or preferred operating systems. Completed games can then be saved as files and downloaded for future reference.

The researchers behind the MMOWGLI portal note that the game enables players to collaboratively brainstorm different ideas. Game players post ideas, and then respond with other ideas that build, counter, redirect or call for further expertise … Points are earned based on the influence of the ideas recorded on individual cards and their perceived value. 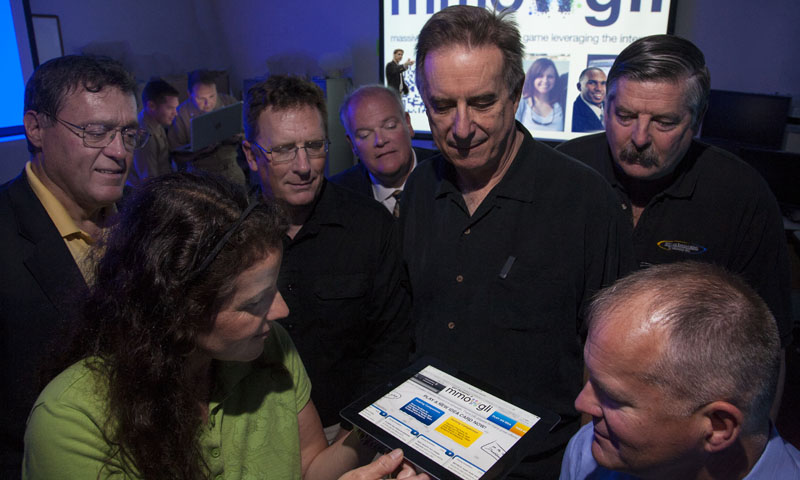 NPS students and researchers involved in current MMOWGLI games gather to review the latest ideas generated through game play. MMOWGLI game masters can affect the direction of the game, earmarking specific ideas that have exceptional merit to encourage further thought and development.

As each MMOWGLI game progresses, players collect “card decks” consisting of chains of cards, which are the basis for larger idea sets. MMOWGLI’s point-scoring algorithm awards “exploration points” based upon the reactions of other players to your idea cards. Points are also awarded based on fellow player ratings of your published idea cards.

Brutzman and his colleagues believe that this approach will encourage innovation throughout the Navy by leveraging group expertise against “wicked problems” - complex challenges for which there are no easy solutions.

“Game masters are generally subject matter experts in the area being explored, but sometimes they are just people who think outside the box, people who are great synthesizers of information,” said Law. “We help people to put ideas together that players may not see.

“For example, we dealt with piracy and a player recommended that we explore the affects of public shaming as a deterrent, a game master recognized the merit of that idea and helped to marry the player with someone exploring the issue,” said Law. “There is a mechanical as well as a content aspect of what we do … We are the wizard behind the curtain, guiding the players through the process.”

In addition to guiding players through MMOWGLI games, Law prepares future game masters to run their own MMOWGLIs.

“My role is to train them on the mechanics of MMOWGLI, there are areas of the system that provide feedback that is important to the game masters. I primarily take them through those mechanical functions. [I also] work with the game masters to invoke responses. We show them how to mark players ideas as “super interesting” when they appear to hold particular promise. The leaderboard then shows who has the most points in the game – in other words, who is most effective and influential,” said Law.

Brutzman and his team are also exploring ways to promote competition amongst players within their games.

“We give out awards, such as certificates signed by Deputy Assistant Secretary of the Navy [for Research, Development, Test and Evaluation] Mary Lacey, so that the participants have bragging rights and can put a certificate on their wall,” said Brutzman.

“One of the things we really like a lot about MMOWGLI is that it leads to ideas, that people would not have otherwise come to, in a very quick manner,” said Lacey. “It gives us an opportunity to collaborate with the business side of the house, we are no longer just engineers speaking to engineers.”

Jensen continues to lead the MMOWGLI effort, but he and Brutzman are working to guide the enterprise toward a user-developed, community-based, self-sustaining business model.

“The transition is succeeding. We are sharing capabilities and addressing new challenges that will ensure the success of a self-sustaining model that is repeatable and broadly innovative while maintaining player privacy and anonymity,” said Brutzman.

Brutzman and his colleagues are also exploring techniques and technologies with the potential to, amongst other things, open up MMOWGLI to foreign participants.

“We are working to figure out how to run a multilingual game where people can type in their own language and an automatic translation can be provided,” said Brutzman.

But first, the MMOWGLI team will be challenged by prescheduled forays into the worlds of naval air power and perhaps their most challenging wargame to date – the Black Swan Event, a catastrophe like 911 whose inevitability is predictable, but only if the best minds in the business, are able to read the tea leaves pointing to a disaster of international proportions.

For more information about upcoming games visit the MMOWGLI portal at https://portal.mmowgli.nps.edu.