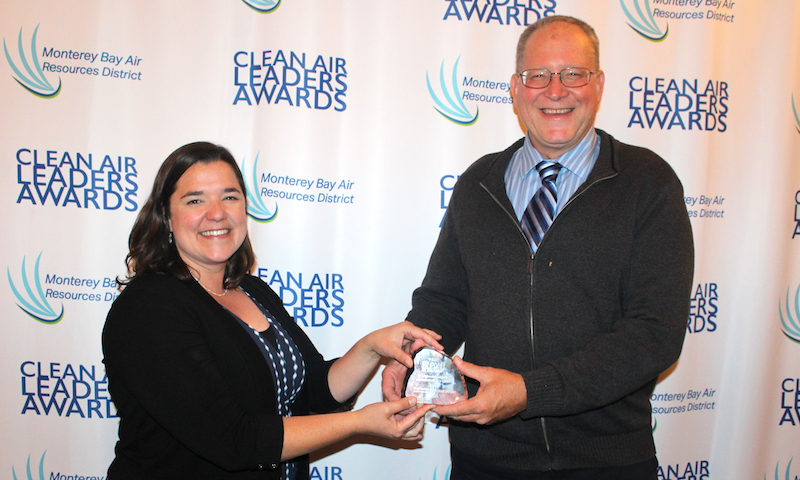 Lecturer Doug Seivwright of the university’s Mechanical and Aerospace Engineering (MAE) department was presented with an award of individual distinction for Technology/Air Quality Education at the 2019 Clean Air Leaders Awards held by the Monterey Bay Air Resources District (MBARD), May 16, for his groundbreaking work at NPS’ Turbopropulsion and Gas Dynamics Laboratories.

Along with MAE chair, Dr. Garth Hobson, Seivwright is researching a new method of transforming heat from engine exhaust into electricity, which has the power to greatly reduce the Navy’s reliance on fossil fuels.

“The intent is to capture heat in a closed loop carbon dioxide cycle and run the heat through another gas turbine to actually produce electrical power,” Hobson explained. “We’re only talking about 10 percent of the power out, but that would be wasted in any case. If you do it strong enough, you can actually recover quite a bit of heat.”

This free energy could potentially have a huge impact across the Fleet as it strives to reduce energy requirements and increase resilience of facilities and operations across the globe.

Since 2013, the Office of Naval Research (ONR) Energy System Technology Evaluation Program (ESTEP) has sought to forge alternative energy technologies and a capable workforce to address one of the greatest costs, and vulnerabilities, of the military – reliance on traditional, external energy sources.

“We have seen the dangers faced by our Marines when it came to resupplying forward operating bases, the dramatic costs involved in providing the fleet and force with enough fuel and energy to run their bases at home and accomplish their missions around the world, and today we see increased the rise in cyber attacks on energy facilities,” ONR department head Dr. Richard Carlin noted in a 2017 press release.

NPS has been a critical component of ESTEP since its inception, and Hobson and Seivwright’s research aims to bring this to the next level.

Their project, Waste Heat Recovery from Gas Turbine Exhaust, extracts heat energy from the exhaust steam of an engine, heat which otherwise would be lost forever. Applying carbon dioxide to a closed loop known as a Brayon power cycle, Hobson and Seivwright are able to harvest bonus energy and potentially reduce emissions by as much as 34 percent.

“The rationale behind this technology is that if you can recover this energy, you can use it for a more useful purpose and get more energy out per unit of fuel that you’re burning,” Seivwright noted. “Essentially, you’re getting a more efficient process: the less energy that you have to put into a machine, the less emissions you’re producing.”

It’s not a new idea for the Navy, but previous attempts to refine the technology weren’t able to pan out.

In the 1990s, for example, the service attempted to outfit cruisers with steam heat exchangers to heat cabins in the vessels. Within four years the systems had all thoroughly corroded and needed to be ripped out, according to Hobson. Electrical heaters were installed in their stead, thus actually increasing the energy load – and fuel use – of the ships’ gas turbines.

What drives Hobson and Seivwright’s research is a new way to make use of one of the most ubiquitous of gases: carbon dioxide.

Historically, a Brayon power cycle employs a liquid which is compressed, heated, expanded through the turbine and then cooled to capture energy. With CO2, the liquid in the closed loop reaches a supercritical thermodynamic state – neither liquid nor gas, but somewhere in between – where it becomes nearly incompressible, meaning much less energy is required to have to heat the fluid.

“This is basically killing two birds with one stone,” Seivwright said. “We’re harnessing an additional resource for energy production, basically free energy, but over the long haul we’re essentially getting more energy out than we would normally put in.”

As a federal government agency dedicated to healthy air quality throughout Monterey, San Benito and Santa Cruz counties, MBARD created the Clean Air Leaders Award in 2010 to honor citizens who are making positive contributions in this domain.

The awards specifically identify individuals, organizations and companies for “initiatives in the region that advance the understanding and/or awareness of air quality, promote improvements in air quality through policy, regulation or practice, or improve air quality monitoring,” according to the group’s awards website.

“By recognizing these leaders, we hope to inspire more people and organizations to make a positive impact on air quality, and even more initiatives to be undertaken.”