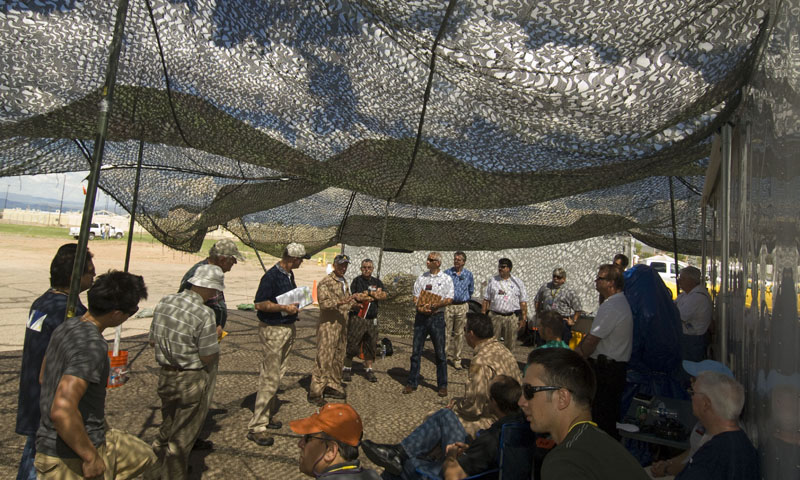 The project, dubbed Beyond Line of Sight Command and Control (BLOS C2), seeks to create a self-healing, self-forming network with Type I encryption and anti-jamming capabilities that can survive in satellite denied environments.

Roeting has worked for the last eight years to establish a high-bandwidth networking capability to generate a common tactical picture (CTP) as well as bi-directional C2 for special operations forces, joint tactical air controllers and other ground forces.

“This is the last mile in completing Vice Adm. Cebrowski’s vision for a network centric battlefield,” said Roeting. “The BLOS C2 architecture will get the U.S. military one step closer.”

Roeting’s solution to the beyond line of sight command and control problem utilizes Common Data Link (CDL) radios already in the Department of Defense’ inventory.

“CDL radios have the ability to be used as a platform to send data to other CDL radios, each radio becomes a node in the BLOS C2 network,” said NPS Department of Information Sciences Research Associate Professor Shelly Gallup.

But in order for the CDL radios to behave as desired, a software modification had to be made to make the CDL radios bi-directional and fully network capable.

“There were a lot of skeptics that said it could not be done, but we did it,” said retired Navy Capt. Jack Jensen, an analyst with DISE. “We got the equipment into manned and unmanned platforms and it worked.”

In order to extend the CDL driven network, DISE researchers worked with the Air Force Life Cycle Material Command who developed the Tactical Pod (TACPod) – a communications and networking gateway designed to be carried on an MQ-9 Reaper.

“We are using MQ-9 Reapers, an unmanned air system (UAS), with a tactical pod which acts as a kind of airborne relay for imagery and video and allows for distributed users to pass information back and forth,” said Gallup.

DISE researchers are also using U2, MQ-9 and Harrier aircraft as well as vehicle and command center mounted delivery platforms and intend to use an Air Force Advanced Targeting Pod (ATP) in future applications.

According to Roeting, the China Lake and Palmdale experiments proved that the various delivery systems were capable of relaying and converting data and imagery between aircraft, ships and Mission Operations Centers (MOC), potentially enhancing access to critical mission information, imagery, and data.

“We also conducted a successful test of the Navy BLOS Data Link (NBDL) terminal and a Rover 6 tactical radio to a U2 aircraft using the U-2’s Dragon Fly architecture,” continued Utschig.

Despite the myriad acronyms and the seemingly futuristic hardware and software, DISE researchers insist that their goal is a straightforward solution to an often-difficult problem.

“What we are trying to do is allow the Mission Operations Center (MOC) to see anything that is going on in their theatre,” said Gallup.

To make their vision a reality, DISE researchers at China Lake leveraged the Joint Battlespace Awareness ISR Integration Capability (JBAIIC) ISR Test Bed, a collection of trailers and vehicles that serve as a Network and Tactical Operations Center with both classified and unclassified networks as well as commercial and military radios, and sensors.

From their vantage point at China Lake, DISE members were able to assess the BLOS C2 technology as well as the military utility of the overall architecture.

“We also completed the first tactical, IP-based use of the U2 within the BLOS C2 architecture and we successfully completed the TACPod contractor and government developmental tests.  All components of the TACPod were tested at short and long range along with their ancillary components,” said Utschig.

Despite these successes, work continues.

“We are testing different configurations of the systems and range limits for transmitting images, procedures and hardware. We are also looking at the engineering design parameters to see if they meet the requirements prepared in [our sponsors] requirement documents,” said Gallup.

The BLOS C2 program is indicative of the DISE approach. DISE focuses on enhancing new or existing technologies in an effort to increase capability and decrease cost while meeting mission requirements.

“We are looking at gaps in capability within the Department of Defense and seeing what is already in the inventory that can be used to close that gap,” said Jensen. “DISE performs a very interesting service for the DOD and the Navy … The taxpayers get good value out of what we do while supporting NPS’”

“We also support NPS’ mission by exposing our students to cutting edge technology and providing them with real-world thesis opportunities that support the warfighter,” said DISE Research Assistant Sharon McNally.

The modification of existing infrastructures to enhance capability is not a new acquisition strategy, but, DISE’s research approach, coupled with field experimentation and analysis, has reduced in-theater delivery and implementation times while avoiding the costly development, acquisition and testing necessary to field new equipment.

“Actual numbers have not been quantified, but when you look at the cost of developing and acquiring new equipment, our approach to BLOS C2 will potentially save many millions of dollars and 5-10 years of research,” said Jensen.