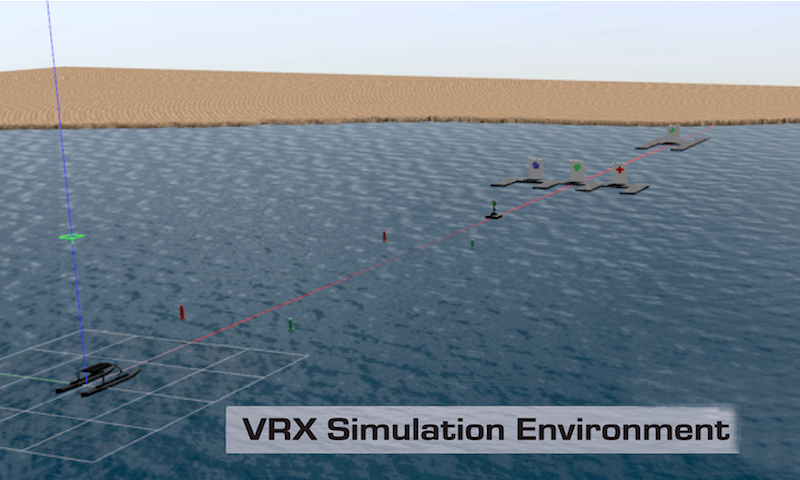 NPS is teamed up with RoboNation and Open Robotics to host the first-ever Virtual RobotX (VRX) competition, an international, university-level challenge designed to broaden students’ exposure to autonomy and maritime robotic technologies. Applications are now being accepted for interested teams.

The Naval Postgraduate School (NPS) has teamed up with RoboNation and Open Robotics to host the first-ever Virtual RobotX (VRX) competition, an international, university-level challenge designed to broaden students’ exposure to autonomy and maritime robotic technologies.

VRX is a virtual simulation designed to further the Office of Naval Research (ONR) sponsored biennial RobotX Challenge. Students will be tasked with developing algorithms and software to command a simulated Unmanned Surface Vehicle (USV), performing prescribed tasks in a simulation environment built by NPS researchers.

“RobotX is the premier competition that focuses on autonomy,” said Brian Bingham, Director for the Consortium for Robotics and Unmanned Systems Education and Research (CRUSER) at NPS. “They use a standard platform and are tasked with a series of challenges in a physical domain that requires them to build on the autonomy, using not only real-world applications but look forward, beyond what we are working on the industrial side.

“The idea is to get people excited about defense and security applications and make them aware of those opportunities,” he continued.

Officially launched in Singapore in 2014, and continued in Honolulu in 2016 and 2018, RobotX began as a collaboration between ONR and RoboNation, a non-profit organization looking to build an open community of technologists and engineers interested in the future of autonomous technologies.

Some of the autonomous functions that RobotX has tried to tackle include how to autonomously dock a vessel, and how to perceive different buoys and aides of navigation.

“This is the introduction of the first ‘virtual competition’ aspect of RobotX,” said Bingham. “The competition will be hosted by NPS and include similar tasks as the physical one but it will all be in a simulated environment. This provides the facility and the capability for teams to be able try their autonomy in a virtual world and allows them to perform better.

Applications for student teams who wish to compete will be open from March 15 – April 7, with the teams notified of their acceptance on April 15.

“NPS and CRUSER benefit from competitions like VRX as part of the larger maritime robotics community,” said Bingham. “This is still evolving and just recent got to the point where we recognize the need for simulation for us to be able to develop autonomy. The role that NPS plays in that development is concentrating on the specific parts of that capabilities that are distinct to the Naval enterprise.”

For more information and to apply, visit the Virtual RobotX website.