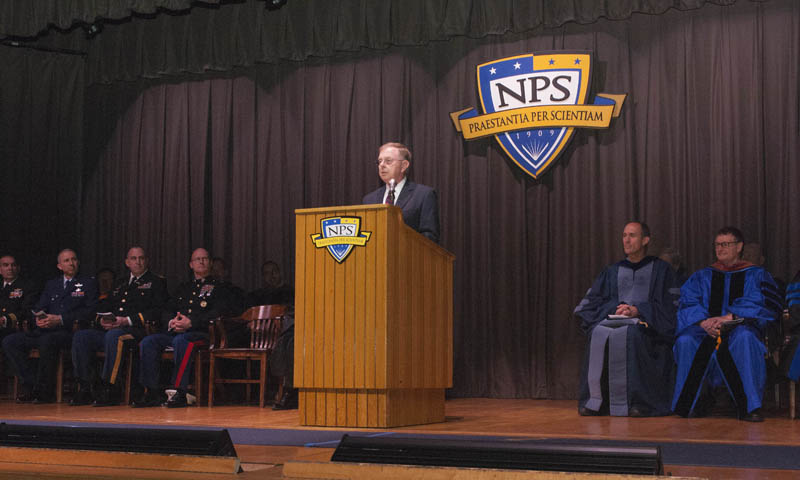 The Naval Postgraduate School (NPS) said farewell to 331 graduates earning 333 degrees from every U.S. branch of military service and from 29 countries during its fall Quarter Graduation Ceremony at King Auditorium, Dec. 18.

NPS President retired Vice Adm. Ronald A. Route welcomed the graduates and their families to the ceremony, and thanked the faculty and staff that contributed to the students’ success. He also detailed the relationship between the students’ efforts in graduate education, and the resulting advancement in combat effectiveness for all the services reflected in the student body, an impact he called, “Sharpening the spear.”

Route then introduced keynote speaker retired Vice Adm. Lee Gunn, who is plenty familiar with NPS in his role as chair of the university’s advisory body, the NPS Board of Advisors, and a graduate of the Department of Operations Research.

Gunn’s active duty military career spanned 35 years including three years as the Navy Inspector General. The advisory board over which he presides provides the Secretary of the Navy with recommendations on matters pertaining to the educational, doctrinal, and research policies and activities of NPS.

Throughout Gunn’s address, he offered the graduating class a series of recommendations that he gleaned from his long naval career and from his childhood on the island of Pohnpei, where he accompanied his father after WWII.

“I grew up loving and respecting Sailors, but not just Sailors … All men and women that put on the cloth of their nations,” said Gunn.

From those service members, Gunn learned the importance of “people, competence, humility, paying attention and staying ahead.”

“You already know what it means to lead people. Imagine what your people will expect of you in your next assignment,” he challenged.

“It’s tough to follow someone who is not at the top of their game,” he noted.

Finally, Gunn challenged the graduating students to be involved in the immediate world around them.

“There is nothing more important than paying attention, nothing more vital than staying engaged and staying in the moment,” said Gunn. “… [And] you must continue to anticipate problems and prepare for risk.”

NPS awards hundreds of defense-focused graduate degrees each year to a unique student body composed primarily of career military officers, select federal employees, and officers from allied nations around the world. The university has been offering graduate degrees since 1909, moving to its current location in Monterey, California in 1942.