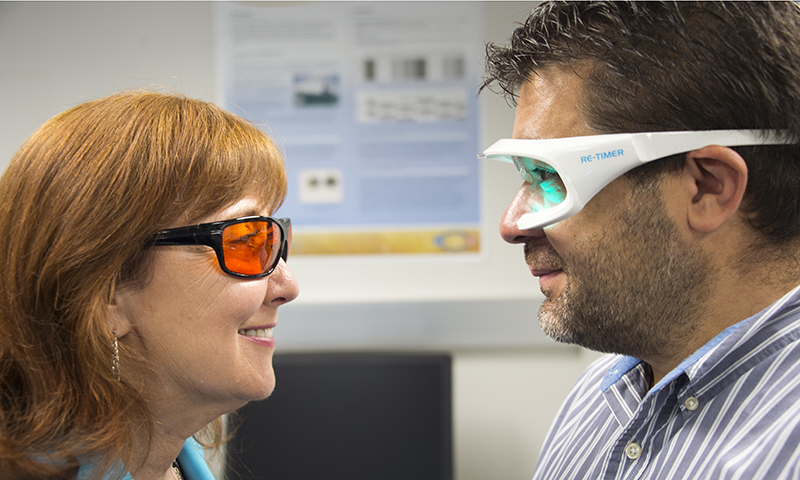 NPS Professor of Operations Research (OR) Dr. Nita Shattuck has spent more than a decade working tirelessly to enhance crew performance by developing watchbills that match a human’s natural circadian rhythm, and demonstrating the advantages of them. And her hard work has finally paid off, with Commander, Naval Surface Forces Vice Adm. Thomas Rowden announcing comprehensive use of her optimized watchbill program to be implemented fleetwide.

Shattuck, along with fellow OR faculty members Dr. Larry Shattuck and Dr. Panagiotis Matsangas, will tell you the program is all about the science surrounding how humans interact with machines, known as Human Systems Integration or HSI, a discipline NPS has been teaching for more than 10 years.

“When you look at a human, and understand that it is a key part of a system, we can design that system to take advantage of a human being’s strengths, and mitigate a human’s weaknesses,” explains Nita Shattuck. “We started a program at NPS in 2004 to teach students HSI, to look for ways that we can improve a system.

“Early in my tenure teaching here, I had the good fortune of having students in the classroom that were Surface Warfare Officers, and they told me about this problem,” Shattuck continued. “They got very little sleep under the watchbills and schedules they were working. They told me stories that I thought were great exaggerations about how little sleep they got, but in fact I learned it was true,” she continued.

Naval Surface Forces (SURFOR) Chair at NPS, Navy Capt. Charles Good, was sent to the university by Rowden to help connect NPS education and research programs directly to current issues in the fleet. He says Shattuck’s innovation in watchbills is exactly what he’s looking to achieve.

“It is extremely significant that the Navy is going to implement this circadian rhythm fleetwide. It’s a case study as to how NPS and academia can help solve, or contribute to solving, fleet problems,” said Good. “Things are constantly evolving in the fleet, and it is good to have someone here who is a fleet representative and can bring current practices, priorities and problems to campus to let faculty know what the current state of affairs is in the operating fleet.”

Shatttuck’s research into human-optimized watchbills and associated shipboard routine has demonstrated its effectiveness on operating ships as far back as 2011, when Shattuck and Matsangas began to bring their circadian watchbills on board several ships to gain data from deployed sailors. In 2013, with positive results from multiple platforms, SURFOR sent out a message encouraging ships to experiment with the circadian watchbill principles and directed them to NPS to get materials and provide feedback.

“That message provided a line of dialogue between the fleet and the study team here that has been bearing fruit ever since,” said Good. “As we collected more data and the conclusions have become more pronounced ... SURFOR felt confident in moving forward ... Guidance was provided via message traffic to implement circadian watchbills fleetwide.”

The transition will begin with a series of seminars in key Navy centers of gravity – San Diego, California and Norfolk, Virginia, as well as with the forward-deployed naval forces in Yokosuka and Sasebo, Japan. These seminars will help commanding officers, executive officers and command master chiefs learn the science behind circadian rhythms, and gain insight into implementing the new shipboard routines.

Although Shattuck has been involved in the research for well over a decade, past students like
Matsangas have returned to campus following their Navy careers to advance the effort. Matsangas served as a naval officer in the Hellenic Navy for 25 years, and his personal experience as a surface warfare officer (SWO) motivated him to return to work on Shattuck’s crew endurance team.

“When I came to NPS for my studies, I was a SWO, and I thought that being tired was the status quo and that it could not be changed,” said Matsangas. “After I got this course in HSI, suddenly I saw the light and it changed everything. As a commanding officer or an executive officer in the Greek Navy, I didn’t have time to work on these issues or the concern to notice. So, when I came to NPS and after these initial courses, I realized that change should and can be made. As a tactician I became a researcher on how you combine tactical operation with science to provide applied solutions to the Navy.”

Shattuck and Matsangas teamed up on a study on board a Navy carrier, and took instruments that measure the quality and duration of sleep. Participating Sailors kept a log of their workday and their watchbill, and also performed a psychomotor vigilance test (PVT) in order to provide more data on crew performance.

“In order to address objectively the performance of the Sailors while they were performing their duties, we asked them to take the PVT, which is essentially a reaction time test,” said Matsangas “What we were really trying to do was not only improve watchbills and schedules, we tried to improve the overall work schedule of a ship.”

Although the fleetwide implementation of Shattuck’s research is now on the horizon, she is quick to note the most important concept she has studied is not the watch schedule, but rather, how to optimize a system for the human integrated into it.

Dr. Larry Shattuck, a retired Army colonel and Nita’s spouse, is the current director of HSI at the university.

“HSI is an interdisciplinary program … Our students get an overview of the domains of manpower, personnel and training, human factors engineering, habitability, safety and survivability,” he said. “Those domains are what they learn about, but HSI doesn’t take place in a vacuum.

“Imagine the person that is going to operate, maintain or support some technology,” he continued. “That human comes equipped with capabilities and limitations. In other words, there are things that a human is capable of doing because they have the right knowledge, skills and abilities. And they also have limitations in some way that prevent them from doing things. HSI is about trying to take the capabilities and limitations of the humans and align them with the affordances and constraints of the system.”