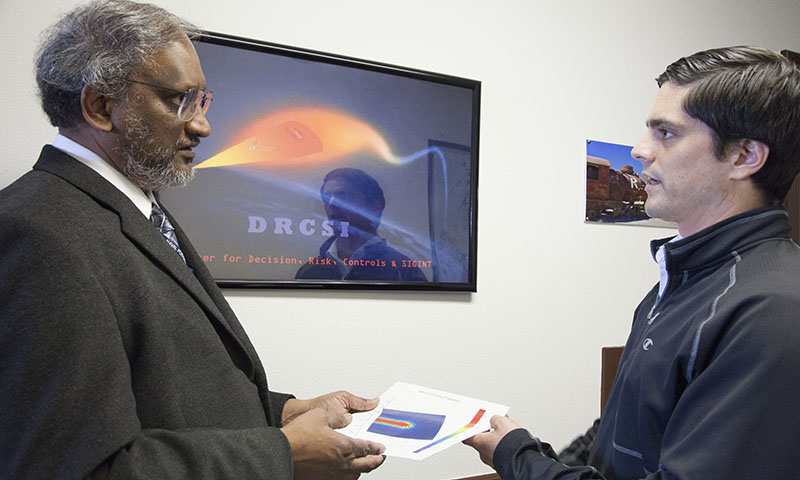 From earth’s orbit to the world’s oceans, the U.S. Navy is dedicated to protecting the communications capabilities and manpower necessary for operations worldwide. Defense researchers are consistently working to understand new technologies, and how those systems could help or hurt the U.S. armed forces.

“For many years, the U.S. government and many foreign countries have been working on developing high-energy, directed-energy weapons. And this goes back to at least the ‘60s and ‘70s. But I think the subject has matured in the last couple of decades, and now laser and microwave weapons are very lethal. Not only for the U.S. but for other countries as well.” explained Sritharan. “So the mission of this program is to stimulate scientists in the U.S. to think about developing a capability to detect and protect assets from high-energy laser weapons attacks. And we have been working on this for three years now.”

NPS researchers see the potential for the laser beam detection research to position the Navy to more safely fulfill their mission when faced with new and emerging threats.

“These efforts are of great importance to the Navy’s mission,” explained NPS Mechanical Engineering Research Associate Professor Lewis DeSandre. “The Navy and Marine Corps forces will be operating in hostile areas where directed energy weapons will be employed by adversaries on an ever-increasing frequency. High-energy laser systems have the potential to disrupt Navy and Marine Corps operations and place lives in jeopardy.  These projects will lead to an enhanced aircraft platforms survivability margin to HEL attack and greater aircraft and personnel survivability.”

Their research is just one component of a three-part research project, incorporating mathematics and physics approaches with experienced NPS faculty. Sritharan and Moshman are focused on the detection of high-energy laser beams, and hope that the software they developed will lead to additional research by SPAWAR on how to incorporate their concepts into existing ship and aircraft systems.

“We took a SPAWAR model and simulated what the measurement of intensity would be at a certain place. And based on that simulated measurement, we used an inverse method to determine the range, the direction of where the laser is pointing, and the initial power,” explained Moshman. “So we would like to hand this off to SPAWAR so they can either run numerical experiments or use their own experimental data and see what this algorithm can do in applications that they are interested in.”

The collaborative research allows the expertise of both NPS and SPAWAR researchers to be applied to a common defense challenge. The NPS team has been working directly with personnel at SPAWAR Center Pacific’s San Diego, Calif., office.

“Our objective at SPAWAR Systems Center Pacific is to provide the scientific and technical understanding required to develop the sensor capability to detect and characterize lasers from bistatic geometries,” explained SPAWAR Center Pacific Scientist Dr. Ike Bendall. “In our application, the signal of interest is the radiation scattered out of the beam path as the laser propagates through the atmosphere.  The characteristics of the scattered signal depend on the laser, the propagation geometry and the atmosphere none of which are fully known nor can be controlled during the collection process.  The laser and geometric information extracted from the signal will increase the Navy’s ability to counter laser directed-energy weapons.

“The work at Naval Postgraduate School is critical to unraveling this complex interrelationship,” he continued. “The end result will be a greater ability to collect laser MASINT information or counter laser threats that could disrupt Navy and Marine Crops operations or harm personnel.”