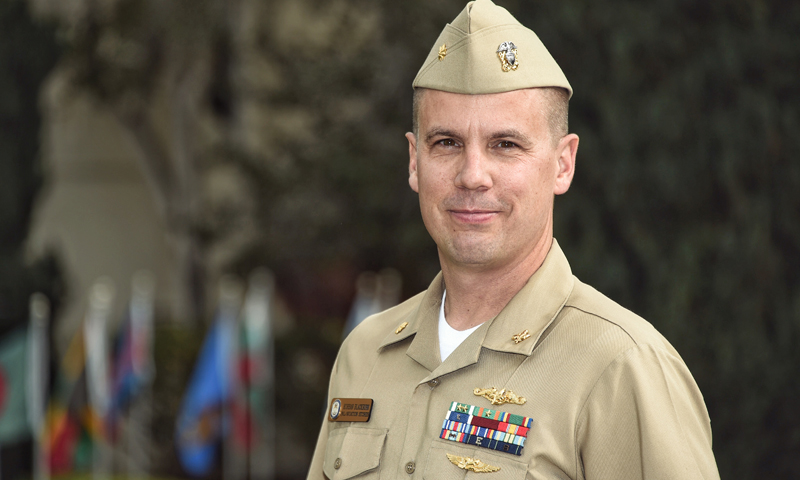 Through his studies in the NPS Department of Operations Research, university student Lt. Cmdr. Korban Blackburn is developing a fuel-usage optimization planner, dubbed Optimized Transit Tool Easy Reference (OTTER), which has the potential to save the Navy millions in fuel costs.

“If I can stay on station for an extra week without fueling, I have optimized my operational capabilities. That’s the goal,” added Blackburn.

OTTER is part of Blackburn’s thesis project in NPS’ Department of Operations Research (OR). Although not fully complete, it is already garnering attention throughout the fleet and was recently recognized with the Athena Project’s Admiral Sims Award for Intellectual Courage. The Athena Project bills itself as an “innovation-fueled initiative to make the Navy better through powerful ideas, unique solutions and intellectual courage.”

OTTER is used to determine the most fuel efficient speeds at which to travel between two given points and helps mission planners to take into account the affects of various speed combinations while incorporating the impact of group transits, and other variables, when conducting mission planning.

“Every ship has a fuel burn-rate curve, which shows how much fuel you burn for a given speed,” explained Blackburn. “Think of gears in your car. Would you rather go 50 miles-per-hour down the freeway in first gear or fifth gear? There is one gear that is the most efficient for a given speed, OTTER helps us to determine which gear that is.”

What OTTER demonstrates is seemingly counterintuitive. On a Littoral Combat Ship, for example, if the ship’s destination required steaming 17 knots for 24 hours, the average person in open water would likely set the ship’s speed at 17 knots and keep it there until it reached the destination. But OTTER reveals that by steaming forward at 15 knots-per-hour for 90 percent of the time, and then 25 knots for ten percent of the time, the ship would still travel at an average rate of 17 knots over a 24-hour period, but would save over 400 gallons of fuel per hour.

Blackburn’s planner builds upon work done by NPS Professor of Practice and retired Navy Capt. Jeffrey Kline, Distinguish OR Professor Gerald Brown, Distinguished OR Professor Alan Washburn, and the late Distinguished OR Professor Richard Rosenthal. The team received a 2007 patent for its Transit Fuel Planner.
“The Transit Fuel Planner advises a specific ship, based on its own fuel consumption curves, what is the most fuel efficient engineering plant configuration and combinations of speeds to transit a certain distance in a certain time,” said Kline.

“[Blackburn] looked at this prior work and recognized that in order for this insight to be most useful, we need to take into account various operational realities. One thing to consider is that ships often travel together in a battle group rather than alone as individuals. For a battle group composed of different types of ships, it’s not so straightforward to determine what speeds the ships should travel in order to achieve a certain average speed. If the ships are assigned very different speeds, they may become too widely separated while in transit, even if they all arrive at the destination at the same time … Lt. Cmdr Blackburn is also considering how to incorporate drills into the battle group’s transit plan,” said Craparo.

Kline got the initial idea for the Transit Fuel Planner when he took command of the USS Aquilla (PHM-4) after graduating from NPS. Even in its rudimentary state, Kline was able to realize significant fuel savings by utilizing it. He eventually returned to NPS and collaborated with members of the OR department under an Office of Naval Research (ONR) program before securing the Transit Fuel Planner patent.

Blackburn’s OTTER program simplifies the Fuel Transit Planner, and makes it more user friendly by graphing the results of various algorithms and reproducing them in a simple, easy-to-follow chart.

“I wanted to make the [Transit Fuel Planner] easy to use. I developed an excel spreadsheet that can be given to someone aboard a destroyer, cruiser or any fuel-burning Navy ship. Sailors won’t need a laptop or anything. It’s literally just a piece of paper,” said Blackburn.

“I developed a program that allows me to set up up to 10 battle groups and factor in schedules for them. You can build up different sets of policies with different constraints and compare how much fuel has been used per group per hour,” said Naylor.

Naylor also spoke to subject matter experts and Sailors throughout the surface Navy to ensure his algorithms were capable of accurately predicting fuel usage in a variety of different maritime conditions and within operationally imposed restraints, an effort that helped Blackburn to solve some of the underlying problems that make OTTER possible.

Similar developments and collaboration between researchers at NPS and ONR have made programs like OTTER succesful in in the past. Blackburn hopes that OTTER will contribute to efforts in the areas of conservation, operational research and efficiency.