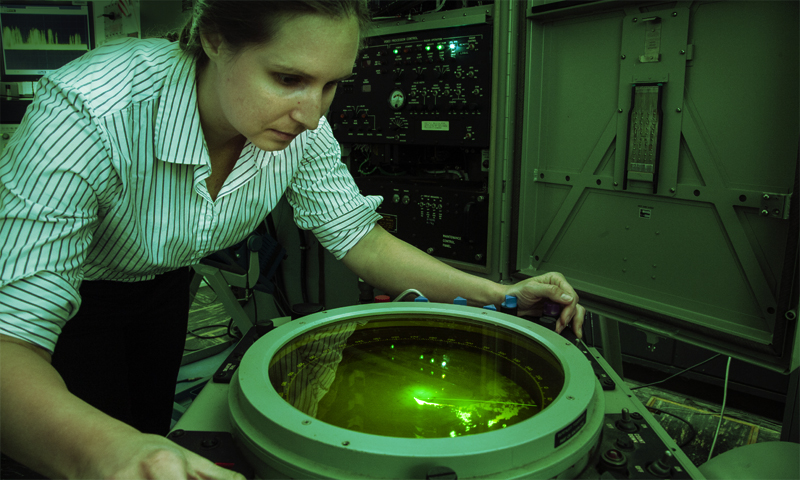 NPS student U.S. Marine Corps Capt. Caroline Scudder is pictured looking into a radar scope at the Naval Postgraduate School. Scudder is working on establishing communications links between Unmanned Aerial Vehicles that may one day be used to impede the ability of enemy air defense weapons systems to target U.S. aircraft.

Student and faculty researchers at the Naval Postgraduate School (NPS) have embarked upon a novel effort to explore “maneuver” tactics in the electromagnetic (EM) domain. Their work was recently featured in the Journal of Electronic Defense and continues to garner attention from top Department of Defense leaders.

“What we are trying to do is put science and engineering behind a new concept that is being discussed by the Joint Chiefs of Staff,” said Pace. “The science is about augmenting current systems to operate in different regions of the electromagnetic (EM) spectrum.”

“We are one of the first to look at the intellectual underpinnings of EM warfare concepts,” added Fisher.

Martinsen explained the theory behind the group’s work.

“The idea behind maneuver warfare is to rely less on digging in and building fortifications while relying more on our ability to maneuver,” he said. “By maneuvering, we overwhelm our enemy’s ability to respond.”

“What we do in our paper is go back to the notion of maneuver and impose the electromagnetic spectrum upon it,” continued Martinsen. “We want to be agile, able to respond to threats.”

Martinsen offered frequency-hopping radios as an example of how a “maneuver’ in the EM spectrum works. Frequency-hopping radios, like those employed by the military, allow two or more radios to speak to each other while synchronously “hopping” between hundreds of frequencies per second. This strategy is useful to the military because it forces its adversaries to contend with an impossibly large spectrum when attempting to jam friendly communications.

But while frequency hopping radios and their equivalents have been instrumental to the military’s ability to “shoot, move and communicate,” they rely upon the same spectrum that hostile forces use in their operations.

“Equipment that uses the electromagnetic spectrum is a force multiplier, but it is also a vulnerability, because we have to rely on the spectrum to use it … Our adversary knows that and will go after those areas,” said Martinsen. “We are looking at our footprint in the spectrum and dealing with the fact that we are going to be challenged.”

Fisher compared the NPS team’s efforts to the decision-making process championed by U.S. Air Force Col. John Boyd, whose OODA (Observe, Orient, Decide and Act) Loop enables service members to put tactics ahead of technology, and has led to battlefield victories against technologically superior, military threats. “Let’s take the OODA loop and put a spin on it in a technological sense,” said Fisher.

One example of Navy research efforts to apply the OODA loop to technology is its continued work on cognitive radio development.

“Eventually equipment [like cognitive radios] will have to use AI functions to make decisions about the spectrum, where they are in it, and where they need to go,” said Fisher. “We need to be able to look at the EM spectrum in its totality and figure out where to go from there.”

Still, the ability to see the EM spectrum in its totality is a continuing challenge for researchers and Martinsen acknowledges that the need to see and understand the spectrum has never been greater.

“The electromagnetic environment has become more congested and contested; there are a lot of people who are using a part of the spectrum,” said Martinsen. “In order to maneuver, you have to know what’s out there; sensing is critical.”

NPS researchers are exploring a variety of EM warfare strategies that involve both offensive and defensive operations that seek to overcome current and possible future limitations to operations in the EM domain.

“Currently we are stove-piped, if we lose a satellite capability, what do we use? What if UHF is down, one suggestion is to create an Unmanned Aerial System (UAV) network … we want to be able to compensate for vulnerabilities by using all the architecture available to us,” said Pace.

Pace and his colleagues recently embarked upon a research effort that aims to do just that. He and the NPS team hope to use UAVs as mobile network enabled, electronic warfare platforms.

“The objective of the proposal is to quantify the electronic warfare technical requirement for unmanned aerial systems to counter surface-to-air missile radar sites,” said Pace.

To do this, Pace and his colleagues hope to use swarming drones, working cooperatively, to jam and track mobile enemy air defense sites.

NPS student U.S. Marine Corps Capt. Caroline Scudder is working with Pace on the concept. Her work is indicative of the research contributions that NPS students make daily throughout the university’s campus.

“A lot of modern day radars are dynamic in nature, if they sense they are being jammed, they jump to another frequency,” Scudder explained. According to her, this is problematic because airborne systems cannot both listen and jam at the same time. They must stop jamming, listen for where the air defense radar is jumping, and then begin jamming again in a process called “look through.”

“My experiment focuses on how to overcome this problem by using two UAVs working together [one designed to listen and the other to jam], said Scudder.

“We aim to reduce our look through to zero … when the enemy changes his frequency, by gosh, we’re right there,” added Pace.

Scudder likened her efforts to an infantrymen who, like an airborne jammer, must both take cover and shoot. If she and her colleague are succesful, they will create the electronic equivalent of an infantryman who is able to constantly shoot and identify targets without ever having to take cover.

“We want to continually take [SAM radar sites] out so they cannot launch missiles against our aircraft,” said Pace. “Using an off board sensor we can “tune” the jammer over a network when the surface to air missile radar changes frequency,” said Pace.

And the drones would not just monitor and jam enemy frequencies, they would be able to then to pass information over a “pheromone network,” built from scratch by NPS researchers, and share information with other members of a friendly UAV swarm.

“The latitude, longitude and health of enemy air defense sites are broadcast over the pheromone network,” said Pace. “It's a simple, but unique architecture that we believe will help us to be able to suppress enemy air defenses.”

Pheromone networks share information in a manner similar to the pheromone trails left by ants when they leave their nests to look for potential food sources. If one ant falls, the others keep going toward their objective. Once the objective is neutralized, the swarm moves on to another target.

JATO (Jamming Technique Optimization) Science Advisor Patrick Ford with the Naval Air Systems Command is excited about the possible implications of Pace’s work. “No work is being done on the concepts addressed, which is why the work they are doing is so critical for proof of concept for such efforts,” he said.

As impressive as all of this may be, it is part of a larger effort that continues across campus. While one team works on communications links, others are writing the algorithms, building the UAVs and miniaturizing the components that will make Pace and the rest of the team’s vision a reality.