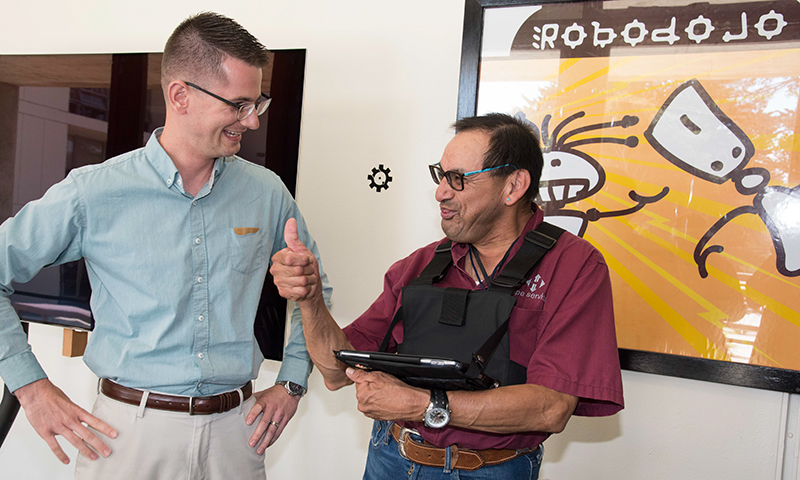 “There is no one else I can think of who deserves this kind of communication device more than Juan,” said U.S. Air Force Capt. Zachary Daniels during a presentation to Hope Services Janitor Juan Olguin at the RoboDojo Lab in Root Hall.

Olguin is part of the Hope Services team, and has been a fixture on the NPS campus since 1995 ... He currently works the Root Hall beat. After seeing Olguin frequently in one of the Root Hall labs, Daniels quickly realized Olguin had a lot he wanted to say, and thought there must be an intuitive, comfortable system he could use to more easily communicate with his friends and family. Daniels approached leadership at Hope Services and shared his ideas.

“I envisioned a harness and a tablet device that could translate text to a computer voice. I researched off-the-shelf products that only needed some minor customization and developed a wearable iPad that is loaded with a text to speech app called Predictable that was specifically designed for the special needs community,” explained Daniels.

Hope Services managers, seasoned veterans at communicating with Juan, pitched the idea to Olguin himself, and he loved it.

Daniels then turned to the Internet, starting a GoFundMe campaign entitled “Help Juan Speak.” He quickly raised the funds needed to pay for the intuitive device.

“The money fully covered the cost of the materials, electronics and software. After some minor alterations and customization to perfectly suit Juan's needs, we now have a finished harness that cradles the tablet,” Daniels explained. “Juan will be able to wear the system during his daily janitorial duties and easily deploy it to type out words and phrases that can be translated to an auditory voice at the push of a button.”

Olguin, who generally has a lot to say, currently uses sign language and gestures to get his points across to others.

“I’m very thankful to Capt. Daniels for this great gift, I love it!” Olguin said with the help of a sign language interpreter. There will be a learning curve to get used to the new device, but if his optimism and appreciation are indicators, he’ll be conversing in no time.

“I was really moved to see how much Juan appreciated this. To see all of the love and support of everyone around Juan translated into a tangible item that he can physically hold is immensely gratifying,” Daniels noted. “Juan seemed equally as moved to know how much we all care about him, and that is what made this project worthwhile.”

“Sometimes it just takes a little extra push to put our innate humanity to work,” he continued. “I like to take the approach that if something needs to be done, I might as well step up and do it rather than wait for the next person to take the initiative. All it takes is one person to make that initial step and then others will want to help out and push a project forward.”

Daniels is a student in the Department of Meteorology, currently in his fourth quarter. His previous command was as a staff weather officer in the 607th Weather Squadron in Seoul, South Korea. Upon graduation, Daniels will be assigned to the 45th Weather Squadron at Cape Canaveral, Fla., supporting government and commercial space launch operations. Daniels grew up as an Air Force kid where his father completed his own career of service, in Washington, D.C.