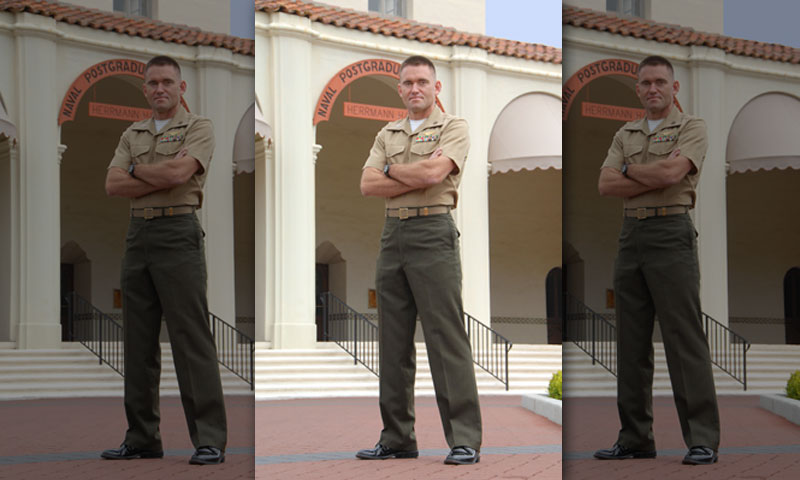 Marine Corps Capt. David Coté, an Operations Research student at NPS, has been named the “Marine Corps Times” Marine of the Year for 2011. The award recognizes Marines that do heroic work, aside from their operational achievements, to improve the lives of other service members and the communities they live in.

A Naval Postgraduate School (NPS) student has been named the “Marine Corps Times” Marine of the Year for 2011, and will be presented the award during a ceremony in Washington, D.C., July 21, with members of Congress and select senior Service Chiefs in attendance.

Capt. David Coté, a Naval Academy graduate and Operations Research student at NPS, was selected to receive the honor for his enduring volunteer work and inspirational sacrifices beyond his every day operational commitments. The Marine of the Year award recognizes a single Marine each year that stands out because of his or her work to improve the lives of other service members and the communities they live in.

Coté’s achievements prove exceptional in many ways. He has improved the lives of his fellow Marines by demystifying the education process and Post 9/11 G.I. Bill, he is devoted to help end veteran homelessness, and he promotes organ and tissue donation as a living example.

Although he is delighted to receive the award, the recognition for Cote simply represents the opportunity to shine a spotlight on the causes that are most important to him.

“In my mind, this award doesn’t make me any more valuable or worthwhile. I was just pursuing my passions – working on veteran homelessness, for example – and it became interesting to someone else too. I am happy about that. I hope to bring more attention to this important issue,” said Coté. “Every Marine has something they want to work for, to fight for.”

One of Coté’s most important causes is his work to help homeless veterans get back on their feet. Coté says that the problem of veteran homelessness in this country is very important because veterans are significantly overrepresented in the homeless population.

“My heart goes out to homeless veterans,” said Coté. “I am saddened that there are thousands of veterans who have served this country … and now they are homeless on the street because of the invisible wounds of war like combat stress, mental illness or chemical dependency. The military-civilian transition needs some attention too.”

Coté started working with the homeless veterans over five years ago with an organization called Veterans Village of San Diego. In particular, he participated in an event called Stand Down, which is a three-day, community-based, service-oriented retreat that offers veterans a new start to “combat” life on the streets.

Stand Down started in 1988 in San Diego and was the first program of its kind. It has been replicated across the United States in dozens of U.S. cities with the purpose of providing services to homeless veterans that include shelter, medical care, hygiene, substance abuse, social and job counseling, and even legal clemency for minor offenses. “Stand Down provides critical services to homeless veterans in one place and at one time. It helps veterans stay motivated and feel strong again,” said Coté.

“Each one of these veterans did what their country asked them to do. The vast majority of them served honorably and in combat zones. We have to do better to take care of our veterans, it breaks my heart to see them on the street,” Coté added. “I’d like to see every veteran who served this country – no matter what uniform, no matter what conflict – to have the ability to live under a roof in a safe environment and get a job and keep it. Veteran homelessness is a complex and sometimes controversial issue. The causes are worth exploring deeper. There is a solution, and I want to be a part of that solution.”

As part of his hopes to see Marines succeed, Coté places high value on promoting education and on motivating his Marines to strive to better themselves. To be an example to his Marines, he applied for the Marine Corps Special Education Program, which is what landed him in the Operations Research program at the Naval Postgraduate School.

“I value higher education and I had to be an example to other Marines,” said Coté. “How can I ask them to pursue educational opportunities if I’m not willing to do it myself?”

Coté is also very involved with promoting organ donation and currently volunteers with the National Kidney Foundation to counsel potential donors and recipients. His interest in this cause originated when his father, Vincent, suffered end-stage renal failure, which placed him in need of a new kidney. Being a match, Coté donated one of his own to his father. In the process, Coté realized how many people agonized waiting on ever increasing transplant lists. This gave him the motivation to get involved and do his part.

Cote’s eagerness to selflessly help vulnerable populations and his efforts to do so were arguably deciding factors in winning the “Marine Corps Times” Marine of the Year Award, but Coté modestly insists that he is just one amongst many Marines that deserve recognition.

“In my mind, every Marine deserves to be Marine of the Year. All Marines have passions, or causes that really energize them and excite them. What’s important is that we answer that calling. The response might take different forms, but we are all instruments for achieving something bigger. I was just pursing my passions and it grabbed someone else’s attention,” said Coté. “If you drill down and find the story that every Marine has, any one of them could have this recognition instead of me.”