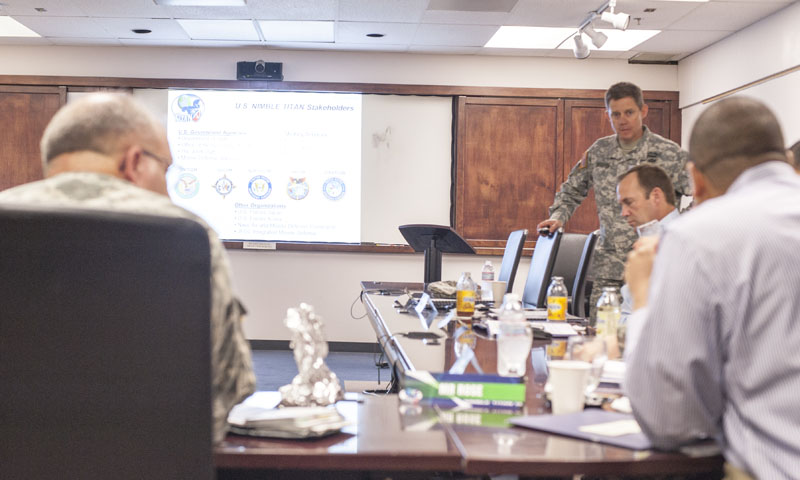 Senior DOD and international officials participate in a ballistic missile defense exercise on the NPS campus, June 24-28, part of the U.S. Strategic Command’s Nimble Titan program. The weeklong exercise was also open to students across campus, and were able to contribute their own view on the issues.

When the U.S. Strategic Command decided to hold a multi-national, tabletop exercise in support of Nimble Titan on the Naval Postgraduate School (NPS) campus, June 24-28, they also extended an invitation to the university’s students to participate. It turned out to be perfect timing for Lt. Meghan Gray who had just graduated from the national security affairs program a few days prior.

“It was a great opportunity and it worked out perfectly,” said Gray whose thesis focused on ballistic missile defense in the Middle East. “After writing my thesis and doing so much research, it’s rewarding to see how missile defense is happening operationally. I thought it was a really good segue between school and going to my next job … It’s a lot like interning before my next assignment.”

Gray will be heading to Bahrain working with an integrated air and missile defense cell, and says she wanted to participate in the exercise to see how ballistic missile defense is approached in an international, operational setting.

“I wanted to get involved with the Nimble Titan exercise to learn more about missile defense in real-world application. It’s a great networking opportunity, and I get to talk to the people that actually make these decisions,” Gray said.

Breaking down boundaries, physical and cultural, Stratcom has dedicated the last eight years to leading international cooperation in missile defense through the Nimble Titan effort.

“What we are doing is building human capital with nations that have begun to think about and work in missile defense,” said U.S. Army Col. Mike Derrick, Director of Allied Integration for Stratcom’s Joint Functional Component Command for Integrated Missile Defense (JFCC/IMD).

The Nimble Titan initiative was developed to address missile defense challenges, specifically the communications challenges, across national boundaries. With 22 countries participating, Nimble Titan is separated into multiple two-year factions, and at the end of each campaign, progress is assessed and goals are set for the upcoming faction.

“What I like about Nimble Titan is that, although Stratcom is the sponsor, Nimble Titan really is the result of the contributing nations,” said U.S. Army Lt. Gen. Richard Formica, Commanding Officer of Stratcom’s JFCC/IMD. “It’s driven by international contribution as opposed to having sole input from the U.S. and its agencies.”

The concept for the NPS tabletop exercise was to split each nation up into groups, or cells, to meet an objective, explained Ed Strikeleather of U.S. Pacom’s Joint Integrated Air and Missile Defense Organization. Nimble Titan’s tabletop exercise used scenarios based on real events, and scenarios faced in missile defense, he added.

Gray ‘s opportunity to participate went beyond just simply observing the exercise, and was integrated into one of the Nimble Titan tabletop exercise cells to assess its outcomes.

“My role is to help create an end-of-action report – it helps to have a better understanding of the findings and happenings of this tabletop exercise,” Gray explained. “We’re offering the follow-up information … Each cell has an observer from my team collecting data.”

As she completed her participation in the weeklong exercise, Gray stressed that Nimble Titan provided her a great opportunity to get involved in something directly applicable to her future job in the Navy.

“I think this is a really great forum for students, especially those that are looking for thesis topics, to come and interface with these different agencies to learn what they are working on,” Gray said. “When I was doing my thesis research, it felt like there was a disconnect between outside agencies and NPS, I don’t think that they realize that we are a resource … Nimble Titan is one of those rare opportunities to improve that.”