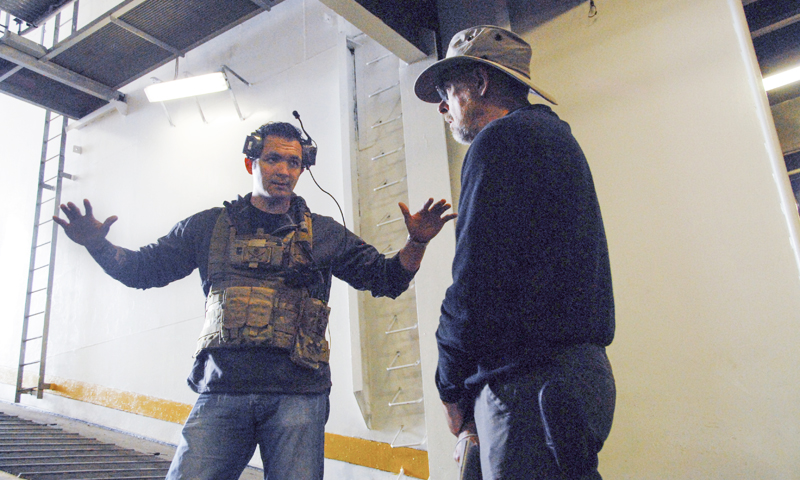 "It is incredible to see how far my capstone project has evolved … It has spanned across the world as a part of NPS’ international experimentation effort,” said Linnel. “NPS truly has a unique capability that not only educates but also facilitates innovation.”

The Marine Interdiction Operation (MIO) 2013 experiment that incorporated Linnel’s application was led by NPS’ Dr. Alex Bordetsky and conducted by the Center for Network Innovation and Experimentation (CENETIX). The broad-based experiment incorporated special operations forces from the U.S., Canada, Norway and NATO experts with chemical, biological, radiological and nuclear (CBRN) support from the Czech Republic. The experiment also utilized equipment and expertise from both private industry and academia.

“I was able to scale Lighthouse SSE to a grander level stretching across three nations allowing for information from the objective site to be sent to a static C2 [Command and Control] element hundreds of miles away in a matter of seconds,” added Linnel.

The experiment began with an exercise that kicked off in Oslo, Norway, June 3. U.S. and Norwegian special operations forces led by Linnel searched a simulated compound leading to the discovery of a chemical source, explosives, and several persons of interest. These discoveries led the combined teams on a manhunt for an individual preparing to conduct a notional CBRN attack.

“The intelligence scenario drove the movement of the pursuing team along with bringing in a static C2 element and feedback from experts from across Europe,” said Linnel. “The scale of this experiment was purposely designed to incorporate extreme distances to show that actions on an objective can easily reach back in near-real time to an element hundreds of miles away with data, text, video and voice communication – even in austere environments.”

The exercise progressed as a CBRN sensor located in the port of Oslo alerted Norwegian authorities to a potential CBRN threat.

According to Linnel, the multi-national and joint service nature of the exercise led to increased understanding and added fresh perspectives to the often-perplexing challenges posed when conducting SSE.

“This experiment was a success, it sparked the interest of other European nations who seek to participate in next year’s experiment,” said Linnel. “The experiment next year will evolve further to include shoot houses and advanced military planning. It will stretch across the U.S. and into the Czech Republic.”

Linnel developed the Lighthouse SSE application, which was so critical to the European leg of the MIO 2013 experiment, with support from a diverse team of software engineers and experts from the NPS Department of Defense Analysis’ Common Operational Research Environment (CORE) Lab.

CORE Lab Co-Directors, U.S. Army Special Forces Col. Greg Wilson and NPS Assistant Professor Sean Everton, utilize data like that facilitated by Lighthouse SSE to reveal, amongst other things, the relationships between individuals that constitute dark networks – clandestine organizations that operate in the shadows of their respective governments and may include terrorist groups.

“Capturing relational data as part of SSE can provide a window into the social networks supporting these dark networks," said Wilson.

Wilson, Linnel and his fellow military researchers stress that understanding these relationships is critical to revealing the interconnected networks that support the very threats that the MIO 2013 experiment seeks to eliminate.