NPS Student’s Internship Could Lead to Research Partnerships with NASA

NPS Student’s Internship Could Lead to Research Partnerships with NASA 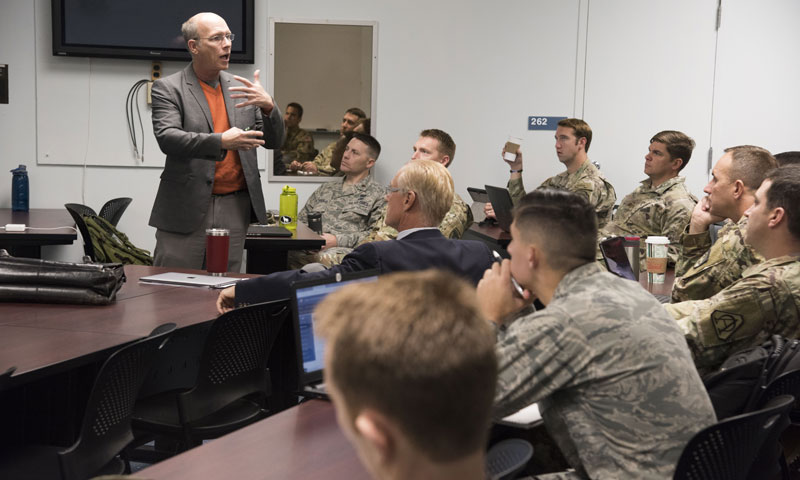 A NASA delegation’s visit to the Naval Postgraduate School (NPS) could open the door to fruitful future collaboration on some of the nation’s most critical technology challenges.

Researchers from NASA’s Armstrong Flight Research Center (AFRC) conducted a whirlwind tour of the military academic institution, Nov. 27, presenting briefings on current research and meeting with faculty to explore new ways to work together, and push the frontiers of emerging technologies.

“Cooperative research among all government agencies and industry is vital to our national defense now more than ever,” said Dr. Howard Pace, NPS Graduate School of Business and Public Policy (GSBPP) professor who helped coordinate the visit. “In the age of great power competition, we must extract what each of us is best at, and in the ensemble, provide the best capabilities for our nation.

“This was exactly the case with the NASA and NPS exchange,” he stressed.

The day-long event was originally prompted thanks to a rare, quarter-long internship conducted this summer at AFRC by NPS student, U.S. Navy Lt. Todd Coursey.

The NPS graduate student not only supplemented his applied physics curriculum researching next-generation fiber optic cables at NASA, but also took advantage of the opportunity to network with professionals in his field that he would not otherwise have encountered. Walking around one day, he came across AFRC’s technology partnerships office.

“I thought to myself, ‘Oh man, that’s perfect!’” Coursey said. “So I just knocked and walked in and they welcomed me with open arms; we were able to put together a tentative plan.”

“Decades ago, NPS had a pretty good relationship with NASA Armstrong, but that kind of faded away,” he continued. “Then I had the chance for the internship and to kind of pick it back up. There’s so much opportunity to collaborate. As budgets tighten and as technology advances, collaboration is absolutely paramount to moving things forward.”

Resilient Autonomy is a prime example of this. Over the past three decades, AFRC pursued new ways to use artificial intelligence in autonomous collision avoidance systems, providing a critical failsafe for aircraft to avert air and ground collisions. The Air Force integrated AFRC’s Automatic Ground Collision Avoidance System (Auto-GCAS) throughout its fleet of F-16 fighter aircraft in 2014; the system has since been credited with saving multiple pilots from certain death.

In May 2016, for example, a student pilot with the Arizona Air National Guard’s 152nd Fighter Squadron lost consciousness after pulling a basic flight maneuver exceeding 8-G’s. As the frantic instructor yelled “Recover! Recover!” the F-16 hurled towards the ground at the supersonic speed of Mach 1.12. Less than four seconds before impact, the Auto-GCAS kicked in and the pilotless aircraft rolled upright, pulled a 5-g climb, and safely leveled off.

The collision avoidance system was a success, but AFRC couldn’t go it alone: Auto-GCAS was the result of collaboration between the Air Force Research Laboratory and defense industry partners. Now, as AFRC continues to develop the next generation of autonomous systems, the aeronautical research center is actively exploring new collaboration possibilities.

“The Navy especially hasn’t had as much insight into what we’re doing, so we came to NPS to get the word out,” said Mark Skoog, principal investigator of automatic systems at AFRC. “We’re primarily creating awareness of what we’re developing and when it’ll be available, so the Navy can start to potentially use it in ways we haven’t even thought about.”

Skoog’s colleague Gerald Budd had a slightly different aspiration during the NPS visit. The sensitive nature of the technologies in development severely limits the number of academic institutions and industry partners AFRC can engage with for both the engineering and economic analysis as well as reporting in non-public forums.

Coming to NPS, then, was an eye-opening experience for the AFRC team.

“I didn’t know the postgraduate school did business and economics!” Budd exclaimed. “I’ve been thinking about this problem for two years, so this was like a gift to me: you’ve got highly motivated, competent students that are looking for technical topics, and I wouldn’t have to worry about export control because even if some of it wound up [classified] secret, you’ve got that covered.”

In addition to presenting guest lectures about their AFRC’s work and meeting with the Consortium for Robotics and Unmanned Systems Education and Research (CRUSER) and Space Systems Academic Group (SSAG), Skoog and Budd laid out a roadmap with Pace and two GSBPP graduate students to pursue follow-on joint research.

“They’re going to do their master’s thesis work on trajectory analysis to model the performance of retrieving the first rocket stage by parachute for mid-air retrieval: how much that would cost, how they operate, and so forth,” Budd explained. “So it’s the perfect cross-pollination of the technical engineering and the economic aspects of it.”

Engagements like this open the door to long-term collaboration possibilities between NPS and AFRC. This would be a mutually beneficial relationship, according to Coursey. NASA can tap into the expertise of NPS’ students and faculty, and NPS can thrive in the expanded research opportunities which would have a direct impact on the Department of Defense.

“NPS is a valuable resource they can collaborate with,” he said. “Not only do we have competitive academic stature, but we have the student body who understand operational requirements and can find connectivity in non-traditional areas.

“Through these joint efforts, we are shaping the future of the DOD with the men and women who walk on campus to learn the art of the possible, whether in a lab or a desert field at NASA Armstrong,” Coursey continued. “Our technological strength will come through challenging the status quo.”