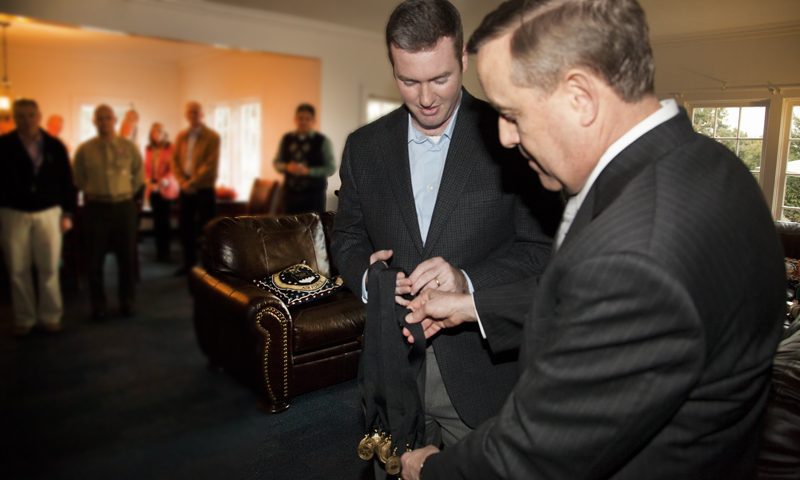 Army Capt. Joseph Billingsley, left, and NPS President retired Vice Adm. Ronald A. Route, right, prepare to present honorary medals to a select group of initial members in the Monterey chapter of Billingsley’s Military Cyber Professionals Association during a club social, Nov. 22. The cyber association, created by Billingsley during his time at NPS in the cyber systems and operations program, has garnered attention from senior Pentagon cyber officials.

In the critical field of cyber operations, the work of an Army officer with little background in computer science has garnered considerable attention from several of the nation’s most respected cyberwarriors.

While attending the Naval Postgraduate School (NPS), U.S. Army strategist Capt. Joseph Billingsley of Stamford, Conn. recognized the strategic value of creating a professional association that catered to the needs of the cyber community.

“My motivation for focusing on cyber as opposed to more traditional areas of strategic thought was the growing concern about this field on Wall Street, K Street and Main Street. The need has been clearly articulated in numerous strategic planning documents and policies,” said Billingsley.

While completing his graduate studies in NPS’ cyber systems and operations master’s program, Billingsley pulled double-duty pounding the pavement to get his Military Cyber Professionals Association (MCPA) up and running.

“I wanted to make a meaningful contribution to the cyber fight and I knew that I wasn’t going to be able to do that in a technical manner. I am a strategist not a computer scientist, but I believe that in an environment as dynamic as cyberspace, the most enduring piece of key terrain is the people,” said Billingsley.

“As a strategist, I am tasked with thinking long term. The establishment of a cyber association is a long-term approach to meeting our nation’s top cyber requirements,” he continued.

“I applaud the work being done by Joe on the MCPA. Cyber is the number-one threat to national security, and people, not technology, will out think and out maneuver these cyber threats,” said Hernandez.

“Our military is a profession and the cyberspace domain, no different than other domains, requires competent, committed professionals of character. The MCPA will bond cyber warriors worldwide and increase the strength of our profession,” continued Hernandez.

Senior Military Advisor for Cyber to the Under Secretary of Defense for Policy, Maj. Gen. John A. Davis became interested in the proposed association after reading about Billingsley’s efforts at NPS. He was so intrigued that he contacted Billingsley and offered to serve as one of his thesis readers.

“A national cyber association allows the varied facets of the cyber domain to come together, share personal experiences, and bridge the various professional cultures within the cyber domain, bringing them together to create a community that will meet the needs of cyber professionals today and in the future,” said Davis.

Davis also offered insight into the importance of the emerging cyber operations field and its relevance today.

“There are at least two dynamics at play that are changing at an alarming rate. The first is our growing dependence upon networked technologies globally. In the areas of public health, safety, finance and personal empowerment, there is an increasing reliance on the cyber domain,” said Davis.

“While the first dynamic offers us both opportunity as well as risk, the second dynamic involves evolving threats – threats from criminal and espionage activities to more overtly destructive efforts that are underway. When we look at these two dynamics, we have to keep them in balance. It is because of these dynamics that cyber operations are so important today,” continued Davis.

The dozens of cyberwarriors, professors and technicians that recently took part in the latest gathering of the Monterey chapter of Billingsley’s Military Cyber Professional Association (MCPA) seem to agree. Although in their infancy, MCPA chapters are popping up all around the country. The U.S. Military Academy at West Point recently reported on the induction of U.S. Army Lt. Col. Kenneth Viall to the MCPA’s Order of Thor.

“It's a huge honor for me …  to be the first recipient of the MCPA’s [Order of Thor] was a real surprise,” said Viall.

The Order of Thor recognizes those that have demonstrated the values of loyalty, duty and excellence and have made special contributions to the military cyber profession.

President of the Military Cyber Professionals of Monterey, NPS student Lt. Matthew Gray of Panama City, Fla. is excited about the opportunities for professional development that the association offers.

“Cyber is the new hot-topic in the information dominance community and offers a wider-scope of things to look at, including cyber defense and offensive operations,” said Gray “This is an emerging field and I would like to play an active role in it.”

Gray hopes to leverage the MCPA Monterey’s proximity to Silicon Valley, Google and other key players in the cyber profession as he expands MCPA awareness and moves the association forward.

“We would like to grow the chapter and use it as a networking tool to try to further the cyber mission generally and to lead at NPS specifically,” said Gray. “We would like to encourage research into cyber, bring in guest lecturers and encourage discussion through brown-bag discussions and workshops.”