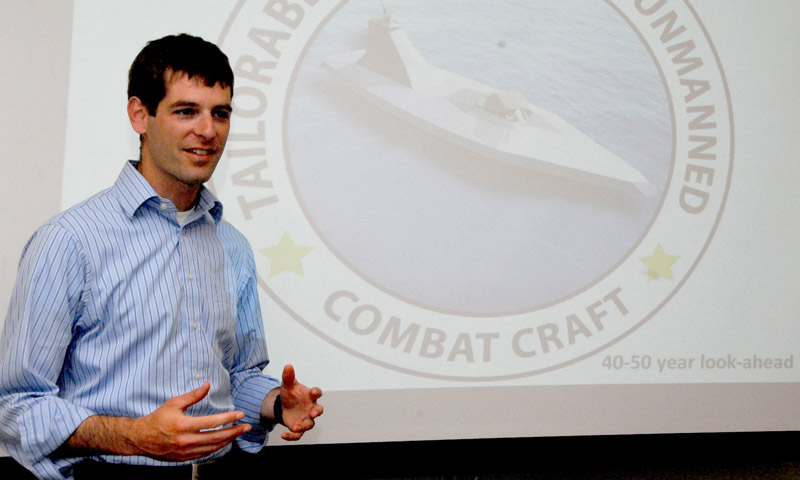 “TRUCC is a study on the viability and mission features associated with unmanned surface vehicle operations of the future,” said Dr. Timothy Chung, who served as a faculty co-advisor on the project. “The way to think about TRUCC is a representation of the different characteristics that would be necessary for addressing the future threats that might engage our Navy and the unmanned surface vehicle requirements pertaining to it.”

The research team, comprising 19 students from the U.S., Singapore and Israel, were given a broad mission statement to start their project, and developed a concept that demonstrated the best use of an unmanned surface vehicle.

“Our tasking was to design a family of unmanned surface vehicles that have a broad range of mission capability, to include intelligence, surveillance, and reconnaissance (ISR), anti-submarine warfare, logistics, counter-swarm, decoy and mine warfare,” said Lt. Cmdr. Loren Jacobi, an NPS student that served as project manager for the research team. “The team was also tasked to produce a technology and capability roadmap to guide investment to reach the desired end state.”

Although TRUCC is a conceptual project, students involved in the research have developed the craft to meet a wide variety of real-world threats commonly encountered by today’s naval forces and addresses probable threats of the future. Ultimately, the study suggests that the integration of unmanned surface vehicles such as TRUCC will serve as force multipliers that will allow traditional surface assets to conduct other critical missions.

“Selecting appropriate missions was crucial for the TRUCC analysis. USV characteristics are well suited to littoral missions, and this serves as a starting point for the integration with manned systems,” said Jacobi. “Unmanned systems operating in the littorals can serve as force multipliers for manned systems by relieving some of the operational burden on large, multi-role manned capital ships.”

By executing littoral missions, high-demand, low-density manned assets are free to conduct their blue water missions, Jacobi continued. In addition, unmanned surface vehicles, such as the ones studied in the TRUCC project, would remove humans from peril and lower the Navy’s operating cost.

“Projects like this demonstrate that unmanned surface vehicles reduce risk to Sailors and lower the cost of protecting high value targets,” said Dr. Gary Langford, a Senior Lecturer of Systems Engineering at NPS who served as the lead faculty on the TRUCC research effort. “It also completely changes the paradigm of security in the maritime domain.”

A capability and technology roadmap accompanies the study in an effort to guide implementation of the recommendations presented in the students’ findings. According to Chung, the strength of the TRCUCC concept comes from systems engineering’s holistic approach to problem solving. “What the system engineering analysis cohort pursued was rather than looking at the technology driving the tactics or CONOPS [concepts of operation], let the CONOPS or mission drive the technology,” said Chung. “Often times we find that a technology comes about and then we figure out how to apply the technology. That leads to a case where someone invents a hammer and goes around looking for nails, when in fact you need a saw or a screwdriver to accomplish the task.“

"To look at this problem from a holistic point of view, the SEA students began asking what are the variety of missions that unmanned surface vehicles can play a role in,” continued Chung. “And then they stepped back and examined the commonalities, and noted the places that only a manned surface vehicle, or only an unmanned aerial vehicle will work.”

Several of the students involved in the TRUCC project are studying at NPS from the National University of Singapore’s Temasek Defense Systems Institute (TDSI). These students, regardless of their primary curriculum at NPS, are required to take courses here in systems engineering. Chung notes that the international student participation provides an unparalleled depth and diversity of perspectives to the project, in both the experiences of the students and in the variety of disciplines they study.

“Having these students be a part of the integrated project team not only brings diversity of disciplines, but also a diversity of perspectives from being international military students,” said Chung. “A lot of the techniques and tools we used came from operations research. The types of mathematical models for some of these things came straight out of operations research class work, and some of the modeling and digitization came from MOVES [Modeling, Virtual Environments and Simulation] students.”

According to Chung, projects like TRUCC that require such cross collaboration, is good for the NPS campus and enriches the student experience. “I think these types of projects that bring together not only students from across the campus, but faculty from across the campus, have an increasingly more important role in how we educate our students here,” noted Chung. “I think there is incredible value in that, and I think the Navy can benefit immensely by looking at things in these holistic ways.”

The research conducted with TRUCC exemplifies the mission of NPS’ Consortium for Robotics and Unmanned Systems Education and Research (CRUSER), according to Chung.