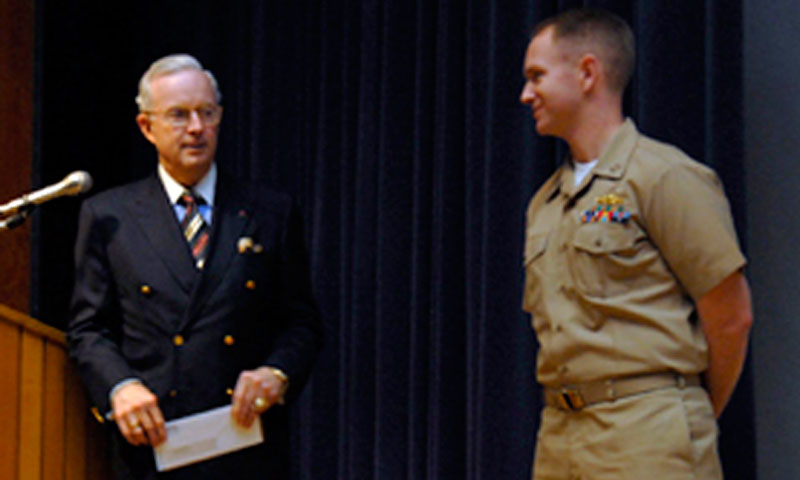 Chief Executive Officer of the U.S. Naval Institute (USNI) retired Marine Corps Maj. Gen. Thomas L. Wilkerson, presents a check for $5,000 to Lt. Jim Drennan, a student with the Naval Postgraduate School Graduate School of Engineering & Applied Sciences, Nov. 23. Drennan was the winner of the 2010 USNI Robotics Essay Contest. The USNI runs a series of essay contests with the purpose of exposing new ideas to influence and improve U.S. national defense and security.

A student from the Naval Postgraduate School (NPS) won the 2010 annual U.S. Naval Institute (USNI) Robotics Essay Contest. With his essay entitled, “How to Fight an Unmanned War: Tactics in Robotic Warfare,” Lt. Jim Drennan, a student with the NPS Graduate School of Engineering and Applied Science (GSEAS) won the $5,000 prize and a spot on the November issue of the USNI’s “Proceedings” magazine.

The 2010 Robotics Essay Contest was open to all USNI members, with focus on the increasing use of unmanned systems by the U.S. military. Taking a quote from the commander of the Twelfth Air Force, Lt. Gen. Norman Seip, who stated that, in 2011, the Air Force would be procuring more unmanned aircraft than manned aircraft. Contestants were asked to address the issues that would arise from such a significant shift to a “robotic” arsenal in an essay not to exceed 3,000 words.

“I wrote about the tactical challenges I think we’ll face as a military as we use unmanned systems [or robots] more and more,” said Drennan. “I also pointed out some key ideas that could help our military today deal with these challenges, such as giving tactical training to the programmers and operators of these unmanned systems.”

The competition offered contestants enticing prizes with winners awarded $5,000, $2,500 and  $1,500, for first, second and third place respectively. Not to mention a lifetime membership to the USNI for the first two winners, and a yearlong membership for the third winner. While these prizes represent a motivating incentive for the competition, Lt. Drennan offered a more grounded reason for the contest.

“I think these competitions are important because they encourage the military’s young leaders to develop their stance on important issues and challenges regarding the defense of the United States,” said Drennan. “Hopefully, the ideas put forward by the winning essays offer the military community value by showing new perspectives and innovative ways of dealing with the challenges.”

Wilkerson said that in today’s shifting world there must be room for new ideas, ideas that sometimes don’t flow with conventional thinking. He said that the institute’s philosophy was to open channels for these new ideas to reach an audience that otherwise would not be reached, that the purpose of the institute was to give a voice to the people with those ideas and to do it in a way that gets those ideas out without any opposition.

“The Institute’s role has always been to challenge conventional wisdom, to give people the opportunity to say things about what sea power does for national defense and national security,” said Wilkerson. “The Institute runs a series of essay contests and practical applications and the reason we do that is one of our focuses, to push the envelope trying to be focused on new ideas.”