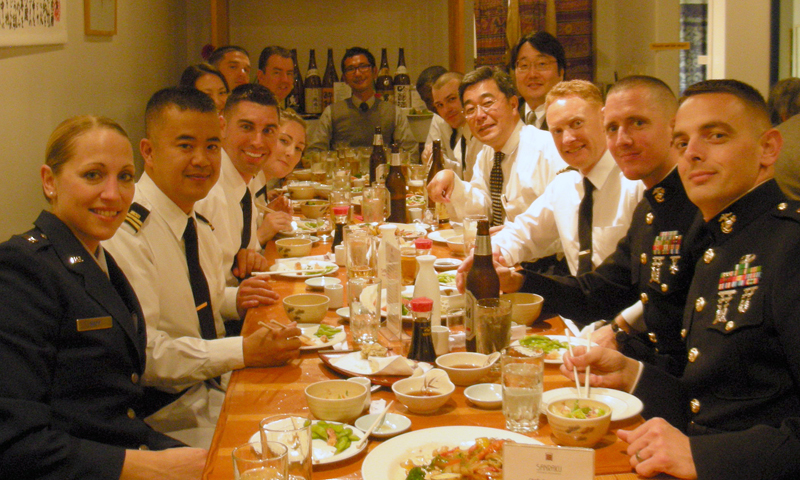 NPS officers attend a dinner with Hiroshi Inomata, Consulate General of Japan during ceremony in San Francisco Mar. 13, to commemorate the one-year anniversary of the 2011 earthquake and ensuing tsunami that devastated Japan in 2011.

At the invitation of Hiroshi Inomata, Consulate General of Japan, military officers assigned to the Naval Postgraduate School (NPS) took part in a ceremony Mar. 13, to commemorate the one-year anniversary of the 2011 earthquake and ensuing tsunami that devastated Japan in 2011

The 15 NPS officers joined more than 600 members of the Japanese and American community at the Presidio of San Francisco to take part in the ceremony which was held to remember the victims of the disaster, to thank the people of California and the United States for their support and encouragement, and to provide an update on Japan's recovery. All of the NPS officers in attendance, representing the Navy, Marine Corps and Air Force, took part in the Operation Tomodachi relief efforts.

“Operation Tomodachi really exemplifies the possibilities of that partnership between our military and our two great countries spanning the Pacific Ocean,” said Lt. John Vokley, an NPS student that delivered formal remarks at the ceremony.

Other attendees at the reception included Speaker John Perez of the California State Assembly, Ms. Kristi Yamaguchi (Co-chair of the Project Aloha delegation to visit the affected areas), and Reverend Cecil Williams of Glide Memorial Church.

“This was a memorial ceremony attended by diplomats and dignitaries from the Bay Area, including civilian, government and military representatives,” said Cmdr. Tim Unrein, an officer assigned to NPS that attended the ceremony. “The Japanese consulate put a program together where they put a video together displaying the devastation of the earthquake and tsunami.”

The reception was held in the same historically-relevant room at the Golden Gate Club on the Presidio of San Francisco that the U.S.-Japan Security Treaty was signed on Sept. 8, 1951.

We have a very strong and committed relationship with Japan and the Japanese Self Defense Force, noted Unrein. Taking part in the relief efforts really cemented our relationship.

Unrein discussed his role in the relief efforts and noted the important role a strong maritime presence in the region played in providing timely assistance to Japan.
“My role was behind the scenes at Submarine Group 7. We were tasked with radiological monitoring and advising,” noted Unrein. “The U.S. Navy is a global force for good and we are capable of delivering aid when natural disasters strike. We have resources such as transportation capabilities, and we can go where others can’t. It only makes sense that we provide assistance when others are affected by unforeseen natural disasters.”

Unrein’s sentiment is one that has also been noted by the Navy’s most senior leadership, including Chief of Naval Operations Adm. Jonathan Greenert.

“Our forward posture and ready and available capability proved invaluable to our allies in Japan following the Great East Japan Earthquake and Tsunami last March,” noted Greenert in his recent testimony before Congress. “Twenty four ships, 140 aircraft and more than 15,000 Sailors and Marines delivered over 280 tons of relief supplies to beleaguered survivors as part of Operation Tomodachi.”