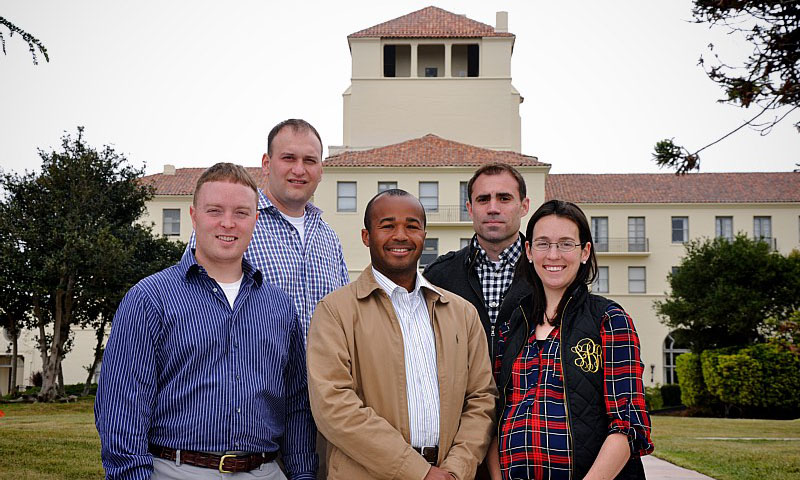 Officials at Los Alamos National Laboratory (LANL) needed a tool to help guide their researchers and scientists through the systems engineering lifecycle process, providing a mechanism for documenting requirements, design, and test results.

“I wanted to give engineers and applied scientist with little or no expertise in system engineering a chance to tailor and apply Los Alamos National Laboratory’s mission assurance processes,” said LANL Executive Advisor, Dr. Heidi Hahn.

She turned to one of the top systems engineering departments in the nation at the Naval Postgraduate School, where a team of students took the challenge for their capstone project, applying a Design Thinking approach to solving the problem.

“The systems engineering capstone project is designed around a three-quarter class structure,” said U.S. Navy Lt. Shannon Buckley, one of the students on the team. “The first quarter consisted of learning about a new procedural engineering [problem solving] concept called Design Thinking. The second and third quarters were focused on accomplishing this project specifically. Design Thinking provided the framework for how we accomplished the task.”

The phases of Design Thinking play out like a Navy Planned Maintenance System where each and every phase has a detailed and clearly defined order of operations. The phases required the students to gather and organize, define issues, ideate, build a prototype and test with users.

“First, we reviewed the problem statement, and then compiled all of the information provided into like-minded groups,” noted NPS student, U.S. Navy Lt. Robert Smith. “We then analyzed the needs, wants, desires, and goals of each group, identifying any similar threads between groups. From there, we discussed how our product could meet the needs of each group.”

"We began brainstorming potential solutions, including different mediums that the formula could take including word documents, paper documents, etc.,” added Navy Lt. Patrick Stone. “We also reviewed alternatives already in place at the laboratory to determine the benefits and drawbacks of each to determine if in-place alternatives could be tailored to fit the design challenge.”

During phase four, students developed a working prototype based on information from the previous three phases. The beta build was developed as a template on Microsoft Word and featured a user-tip protocol. However, user testing in phase five would prove to be difficult.

“The test phase went poorly, but not because of anything the students did or didn’t do,” said Hahn. “We had very low participation by the LANL users who we needed to have test the tool.”

“Testing a prototype from a remote location was very challenging,” added Buckley. “The Design Thinking process is primarily designed around rapid prototyping and testing, however, we were constrained by distance and therefore unable to accomplish the rapid hands-on testing necessary. Fortunately, we were able to obtain a solution through a minimal number of design iterations.”

The distance issue wouldn’t last long though. This past February, the students were invited to LANL during their Engineer’s Week celebration, and used the visit to present a poster documenting their project. They were finally able to meet users face to face.

“We had a great time at Los Alamos. It was a privilege to interact with so many passionate engineers and scientists,” said Lt. Jordan White. “The presentation at Los Alamos was accompanied by a brief from [Systems Engineering] Professor Cliff Whitcomb on the Design Thinking process that was very well received. The lab staff were also engaging and interactive during the presentation and the brief.”

Hahn was also excited about the visit and expressed a desire to improve future joint projects.

“I think they had a blast and we very much enjoyed having them. I wish that we had them here longer,” she said. “If we do another project, though, we would likely have the students out twice – once at the beginning of the project and again for Engineer’s Week.”

After a recent review by an Engineering Capability Review Panel, the MAST tool was unanimously praised for its ability to help guide users through mission assurance processes.

“We have a great sense of accomplishment in knowing that our three quarters of work culminated in a useful asset for the laboratory,” added Lt. Ross Eldred. “We have developed a great appreciation for many of the concepts used in Design Thinking and think that the Navy will benefit from Naval Officers learning the process here at NPS. Additionally, interaction with Los Alamos National Laboratory has been an extremely educational and rewarding experience. We would highly encourage future NPS projects and interaction with the laboratory.”