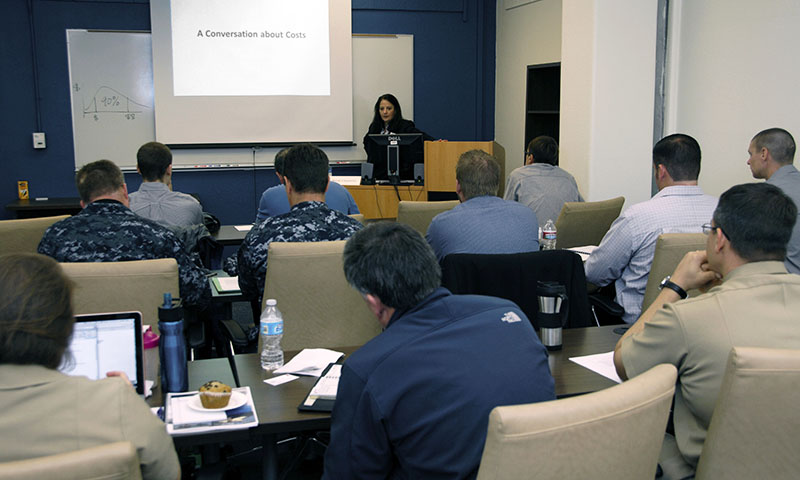 Retired Rear Adm. Wendi B. Carpenter provides students with an in-depth discussion into her career of logistical expertise and life-cycle cost analyses during an NPS Enrichment Week seminar on “The Importance of Cost” in Halligan Hall, March 24.

Retired Rear Adm. Wendi B. Carpenter provided Naval Postgraduate School (NPS) students with a window into her career of logistical expertise and life-cycle cost analysis during an NPS Enrichment Week seminar on “The Importance of Cost” in Halligan Hall, March 24.

Carpenter drew from her years of experience in the areas of logistics, training and aviation in fleet, joint and coalition operations to inform university students on how their education will influence not only their careers, but also the leaders and decision makers they will advise.

“What did a flight hour cost in the year 2000?” Carpenter inquired to the audience of faculty and students. “It took us a long time to figure that out. We made judgments, and later decided to sunset the [F-14 Tomcat] early because there was somewhere around 37 man-hours for every hour that aircraft was being operated.

“We could buy new [F/A-18 Hornets] cheaper for the same capability and reduced costs instead of keeping the F-14 longer. That was a judgment made strictly on data,” she continued.

Carpenter emphasized that changing threats in the world require changing tactics in how we respond.

“Partly because of the Internet and social media, there is opportunity for adversaries to capture and use technologies … It almost puts them on an equal footing,” Carpenter said.

“This means that we need to be more cognizant of cost drivers because they can very cheaply engage us now, and we can’t spend all of our money on high-end systems and not understand how to outsmart them.”

Carpenter delved into her own research into the field of unmanned systems in a concept called ‘Leveraging the Undersea Environment;’ she described how costs could potentially overshadow benefits.

"Even though it may look like unmanned systems are going to give us this great new capability, the cost may be so high we can’t afford it,” said Carpenter. “There is a lot of data you can develop through modeling and simulation, and hopefully we are going to make very wise decisions going forward to get these systems out there rapidly, so they can help us in our quest to maintain undersea dominance.”

During her presentation, Carpenter offered her own beliefs on the NPS education, and its ability to enable students to become the leaders that will be able to meet the changing needs of the fleet.

“My expectations of the quality of the education and thought that comes from here is very high,” said Carpenter. “Whenever you can put someone into a situation where they have the opportunity to grow intellectually, the person that you end up with when they go back out to the fleet will be equipped for tactical operations as a strategic thinker.

“From the exposure students have to premier faculty and guest lecturers, to the opportunity to interact with senior advisors and flag officers, students are challenged daily to look at the operational world differently,” continued Carpenter. “Also, by taking rank off, sitting without being in uniform, allows them to address each other on a peer basis. This is hugely beneficial.”

In closing, she emphasized the importance of strategic thought, at all levels.

“War or peace is birthed in the minds of people” she said. “So whether we are pursuing an avenue that is diplomatic and conversational … or we use the military as part of an engagement strategy, our people, officers and enlisted, need to be able to think well, on their feet and with agility,” said Carpenter.

Carpenter accepted recall to active duty several times, including her final assignment assuming command of the Navy Warfare Development Command, where she and her team worked to deliver capability for Navy, joint and coalition forces through concept generation and development, doctrine, modeling and simulation, and experimentation.