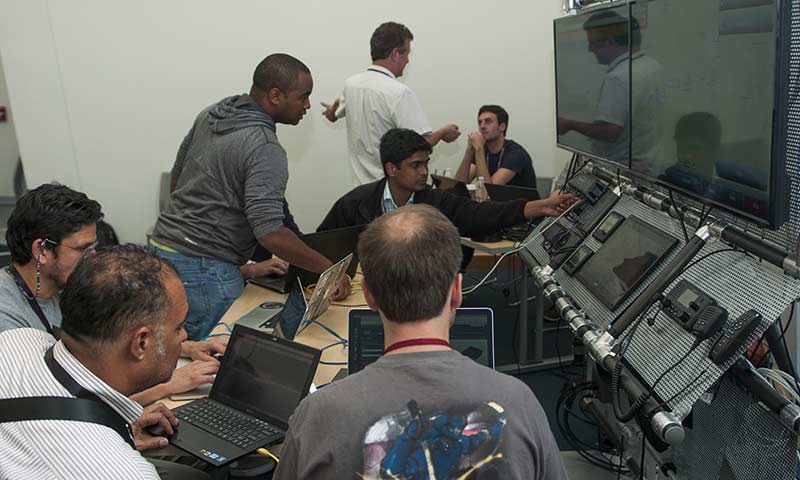 Innovators from across government, industry and academia participate in the third U.S. Navy sponsored HACKtheMACHINE at the Massachusetts Institute of Technology in September 2017. The event is one of several innovative efforts led by NPS students, faculty and alumni honored through the SECNAV Innovation Awards.

In early 2018 during his first visit to the Naval Postgraduate School (NPS), Secretary of the Navy (SECNAV) the Honorable Richard V. Spencer offered his vision for the future of the university, calling NPS a driving force of research and technology, and a hub of innovation for the DOD.

“This institution is a primary incubator for the capabilities that we need now,” he said during his Feb.1 guest lecture. “NPS is at the forefront of improving our capabilities.”

Months later, the latest winners of the SECNAV Innovation Awards were announced Navy-wide, and with NPS connections across the field, the university is clearly living up to the SECNAV’s vision.

In total, nine Innovation Award winners have NPS connections ... Some of the award-winning efforts were envisioned right on the university’s campus by students and faculty, while many others were awarded to NPS alumni, who took their education back to the fleet and field and continued to innovate.

Taking top honors in the Innovation Catalyst category is HACKtheMACHINE, spearheaded by U.S. Navy Cmdr. Zac Staples who, up until his retirement in April, served as the Director of NPS’ Center for Cyber Warfare. Over three separate iterations, the last of which took place in Sept. 2017 in Boston, NPS brought together a diverse pool of cyber security experts in a hackathon-style setting industry, this time at the Massachusetts Institute of Technology’s (MIT) Computer Science and Artificial Intelligence Laboratory (CSAIL).

“I was truly honored to receive this award, but more importantly I was excited for the recognition that our entire team got,” said Staples. “Over the three iterations of HACKtheMACHINE that we did at NPS, it doubled in size and complexity every single time. By the end, we had a huge team of players that without their support we would never be able to get to a point where we are recognized as a leading catalyst for change by the Secretary of the Navy.”

Dubbed the ‘Blue Angels for geeks,’ HACKtheMACHINE gets some of the nations best hackers and cybersecurity experts to focus their minds on Navy problems, bringing innovative ideas to the world of cybersecurity in the maritime domain.

“I truly believe cultural diversity makes us more creative, and I am trying to extend that diversity into the technology domain,” said Staples. “For example, a program office would usually engage with those industry partners who are directly working with the government. HACKtheMACHINE, in contrast, attracted people all across the academic, small business and entrepreneurial space to come learn about the Navy who otherwise would have no other exposure to what we bring to the table.

“This allows people from all over to bring their perspectives and apply them to Navy problems, while not even realizing that their solutions to a completely different problem also solves ours,” he added. “This creates a great newness and energy that we could never get from a traditional conference.”

Following his departure from active duty, Staples has taken the ideas and lessons learned from his time at NPS into the private sector, creating Fathom5. Staples describes the organization as a security-first, industrial automation company with a focus on the maritime domain.

“I didn’t get out of the Navy to abandon the naval service, I got out of the Navy because I love the Navy and want to serve Sailors by innovating at a scale and with partners who can put those ideas into the fleet,” said Staples. “As I completed my naval officer career, the years I spent as an electrical engineering faculty member gave me the opportunity and the resources to be innovative at this level. There is no other place I could have gone that would have given me these opportunities than my last tour at NPS.”

Newell, a 2009 NPS graduate in electrical engineering, took first place in the Innovation Leadership category for his work on unlocking emerging capabilities in transportation for military installations.

“This gave me a number of opportunities in that field and as a result I was sent to Afghanistan for an energy assessment team by the Commandant of the Marine Corps, and following that I became the first technology lead in expeditionary energy,” Newell said.

“Thinking external to our regular programs and being able to engage with industry are things that I learned from NPS, and the job that was created for me from my work at NPS,” he continued. “It was from that time that I was able to kick off my work on mobility transformation.”

Newell’s work involves being a uniformed advocate for unlocking private sector innovations in mobility on military installations, for both personal and official transportation.

“Through our collaborative agreement with them, we learn market forecasting and developmental decisions that help us by facilitating our ability to learn where industry is going to help guide our requirements process and strategic funding,” Newell explained.

“We see this as a great benefit for service members to save money,” said Newell. “A personal vehicle on average is used four percent of the time, and costs $9,000 a year. And service members use them even less as they live in a close proximity to where they work. So you have many junior Sailors and Marines using a third of their paycheck on a vehicle that they barely use.”

“This also greatly benefits transportation for official use,” he continued. “We are only able provide access to only so many Marines with our fleet of government vehicles, and we are pretty efficient in how we do that, but it’s our only solution to a large need, so unlocking these capabilities gives us more flexibility to find other solutions.”

In addition to cutting costs, Newell says that utilizing ride sharing options would also result in a reduction in parking space requirements and gate delays, as well as increased safety and a decrease in DUIs.
“It was a great honor to receive this award,” said Newell. “To have something like this award validates the philosophy of finding mutually-beneficial opportunities between industry and the Marine Corps, and helps you keep motivated.

“It started with my desire to pursue things, that weren’t already in the curriculum, during my time at NPS ... It helped me learn how industry and other agencies work to begin with,” he continued. “All that was critical for me to operate in a world where we unlock these opportunities that the military, the government and other countries can leverage.”

NPS was not only represented in the Innovation awards through work done by its faculty and alumni, but also by its students doing relevant research while fulfills their graduate education.

This is the case for September 2017 graduate Marine Corps Maj. Michael Conte, who received Honorable Mention for the thesis conducted for his degree in information and technology management, “Mobile Device Management of Combat Aircraft.”

“Coming to NPS as a Marine, I wanted to pick a thesis topic that would be beneficial to the Marine Corps and Marine aviation, and also something that I am passionate about and interested in,” said Conte, who found his inspiration as student at the Exploratory Development Lab at Naval Air Warfare Center Weapons Division in China Lake.

“They were taking a Samsung tablet and trying to find a way to build a wireless WiFi access point into an F-18,” said Conte. “Their concept was that they could take a tablet and do functions on it such as load information or use navigation and then send it wirelessly to the aircraft, and they were building a system in the airplane that would allow the wireless connection to directly interface with the jet’s mission computer.”

Although this concept is something that Conte says has been done by commercial aviation for many years, the use of classified information posed the DOD with several unique challenges in integrating the systems, challenges Conte would tackle head on in his research by looking at ways to account for security concerns in accordance with current policy.

“The big overarching benefit is that if we can put tablets on airplanes, in the end we can spend a lot less money and develop essential improvements at a far more rapid pace,” said Conte.

“The next step forward I feel is developing an overarching strategy with the big stakeholders to figure out what entities would be best suited to develop something like this,” he added.

Conte points to the unique nature and mission of NPS, and the diverse expertise of its faculty, that allowed him to conduct such highly valuable and innovative research.

“What makes NPS so significant is, even if your adviser doesn’t have the information you are looking for, they will know someone who will,” Conte said. “Whenever I didn’t know something, my thesis advisor had a contact ready to reach out to. It is a centralized place where we can explore innovative ideas with a faculty that has years of networks throughout all forms of organizations to help bring those ideas into fruition.”