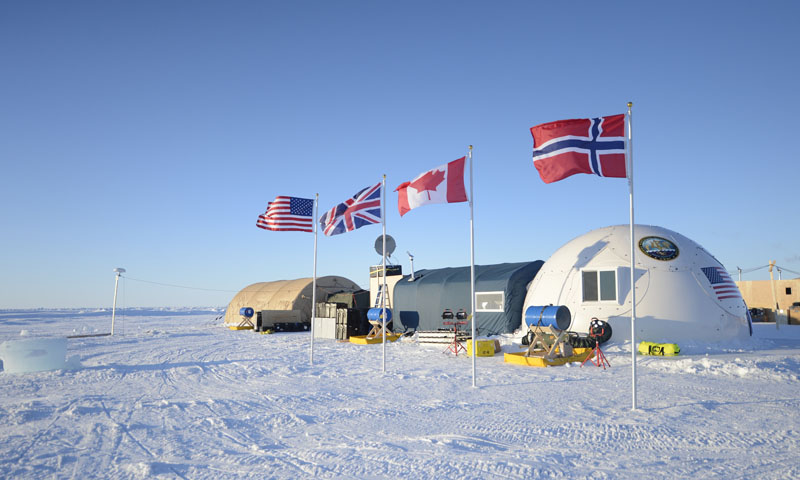 Ice Camp Sargo, located in the Arctic Circle, serves as the main stage for Ice Exercise (ICEX) 2016, housing more than 200 participants from four nations over the course of the exercise. Multiple faculty/student teams from NPS traveled to Sargo to participate in ICEX 2016, performing applied research into varied aspects of unmanned systems, heat transport in the Arctic Ocean, and acoustics.

An interdisciplinary team of faculty and students from the Naval Postgraduate School (NPS) is taking advantage of the Navy’s large-scale exercise in the Arctic circle, teaming up with members of Submarine Forces Atlantic (SUBLANT) among others to participate in Ice Exercise (ICEX) 2016.

The NPS delegation is supporting the effort by conducting a portfolio of detailed acoustic, environmental, and autonomous underwater vehicle (AUV) research at Camp Sargo, built on Arctic sea ice about 200 miles north of Deadhorse, Alaska. They will share the camp with more than 200 personnel on the ice, and 140 submarine crewmen during the five-week exercise.

NPS Department of Oceanography Faculty Associate John Joseph and his team were the first researchers from the NPS delegation to reach the ice.

“Our primary objective was to characterize the acoustic conditions of the changing Arctic environment.  To do this, we deployed numerous oceanographic and acoustic sensors, both in the camp and at remote sites located several kilometers from the camp,” said Joseph.

The research team employed two different mid-frequency sound sources in their experiment. A Navy Type G-34 transducer was “dipped” to various depths up to 700 meters into the relatively warm Atlantic water layer beneath the camp.

“We also deployed four Expendable Mobile Acoustic Training Targets, which are unmanned mobile acoustic sources programmed to run in preset tracks around our two Vertical Line Arrays (VLA) of acoustic receivers in the field. We collected temperature and salinity profiles at the camp that will enable us to look closely at the sound speed conditions throughout the water column,” said Joseph.

According to Joseph, collecting data in the harsh environment of Camp Sargo was no simple task. His team deployed its VLAs in minus 20 degree weather, with wind-chill conditions at a staggering 45 below. They even encountered relatively fresh polar bear tracks in the vicinity of their first VLA deployment.

Research Professor Timothy Stanton, also from the university’s Department of Oceanography, is also heading to the ice. Stanton has been a fixture at NPS for 40 years, and has been participating in ICEX since the 90s. At ICEX 2016, his students will deploy NPS-developed buoys designed to measure processes in the ocean that contribute to melting Arctic sea ice.

“I have been sending students up to the ICEX experiments for over a decade. It’s been an incredible experience for them,” said Stanton. “They make an important contribution to the NPS Oceanography program that is used by both Meteorology and Oceanography and Undersea Warfare students.”

Their primary contribution will come by way of data collected from buoys they are deploying beneath the ice. Physical Science Technician Keith Wyckoff helps build Stanton’s buoys and instructs his students in their care and deployment.

“Everything from the electronics to the mechanical assembly happens here in our lab. We are on buoy 39 now,” said Wyckoff. “You don’t just go up there and turn a switch. There’s a lot of work that goes into deploying one of these buoys into the ice.”

NPS student Lt. Stephen Fleet will be deploying his first buoy at Camp Sargo later this month. “We are going to be deploying an autonomous ocean flux buoy,” said Fleet. “The buoy’s instruments systems are over a 150-feet long,” said Fleet.

The buoy will perform measurements autonomously, and transmit data back to NPS by iridium link for up to a year. Dangling below its near-surface turbulence instruments will be another set of instruments. They will measure ocean diffusivity, which like conductivity, controls the rate of heat coming from deep in the ocean to the surface where it can melt Artic sea ice.

“The upper ocean in the Arctic is actually warmer the deeper you go. Turbulent diffusion, or weak mixing, brings up heat from the ocean depths to the surface where it melts the ice. We want to find out what is the historical trend of that,” explained Fleet. “It’s incredibly important if you are doing numerical modeling to try to predict what the ice will look in 10, 15 or 20 years.”

“It is a particularly complex problem because the ice acts as an intermediary between the ocean and the atmosphere. Unlike elsewhere on the planet, the ice cover insulates a lot of properties between the atmosphere and the ocean, and there are a lot of complex processes that I have been involved in researching with colleagues for the last 30 years,” added Stanton.

Another member of the interdisciplinary team, Research Assistant Professor Doug Horner serves as director of the university’s Center for Autonomous Vehicle Research (CAVR). Horner and his team will be deploying advanced autonomous robots beneath the ice and in the skies above the camp. Their work is being funded by NPS’ Consortium for Robotics and Unmanned Systems Education and Research (CRUSER).

“CAVR is primarily interested in intelligent autonomy – aerial, surface and underwater robotic system interaction and persistence,” said Horner. “There are a lot of challenges that are inherent in 20-below operating conditions.”

But those challenges are precisely why NPS and the Navy are so interested in the Arctic. Understanding the Arctic environment is critical to naval operations and has the potential to contribute to the burgeoning field of Arctic atmospheric science.

“What we are interested in from a science perspective is measuring the ice,” explained Horner. “In the future, we hope to use sensors aboard the Scan Eagle that will give us accurate ice measurements and then combine those measurements with the measurements that we are getting from the underwater vehicles to get a highly-accurate, autonomous measurement of the ice thickness. 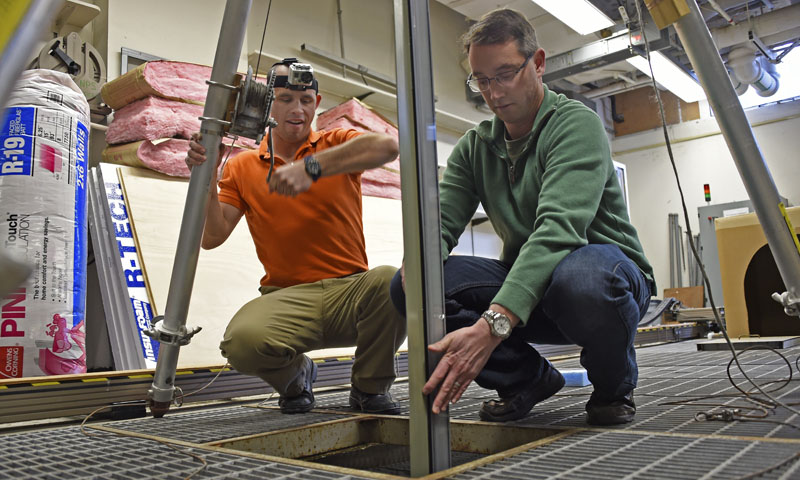 NPS Meteorology and Oceanography student Lt. Stephen Fleet, left, and Research Associate Sean Kragelund, right, practice deploying an ocean flux buoy in Spanagel Hall prior to their departure to the Arctic in support of Ice Exercise (ICEX) 2016. Now deployed under the ice in the Arctic, Fleet’s research will take advantage of the continuous data streamed back to NPS from the buoy in an effort to better understand heat transport through the Arctic water column.

“We won’t do it completely this time, but we are heading towards that direction, specifically with our two classes of underwater vehicles, our three REMUS vehicles and our Aquius vehicle,” said Horner.

Horner and his team will also be helping to solve the problem of under-ice navigation.

“In the undersea environment, GPS is unavailable. Instead of using GPS, we look at features as navigational references to reduce our positional uncertainty. In our case, we are using features underneath the ice to localize the position of our vehicles.

“The sonar, aboard our REMUS vehicle, which generally is used to look downward, will instead be looking upward to create a map of the underside of the ice. We want to be able to look at the map and be able to navigate relative to it,” said Horner. “We will be using what is called ‘Terrain Aided Navigation’ to localize the position of the vehicle without GPS.”

The CAVR team’s research into persistence will also be on display at ICEX. The idea is to get the most out of limited robot energy supplies. NPS students and faculty are exploring this problem by looking into efficiencies like the use of thermal updrafts to lift unmanned aerial vehicles (UAVs), and the use of underwater docking stations to repower AUVs. NPS student Ensign Eric Bermudez, with the university’s Undersea Warfare curriculum, will be traveling to the Arctic to further explore strategies in this important area of robotics research.

“Our vehicle uses an acoustic beacon that communicates with the vehicle as it comes in. This is important because it extends the mission time that the Remus can remain in the water. As it gets closer to the docking station, its uncertainty closes. We’re combining its acoustic and terrain recognition abilities,” explained Bermudez.

Bermudez has just begun his career as a naval officer, but he believes that the work he is doing at NPS will be important to the future of U.S. submarine forces.

“What I am studying here is very beneficial because AUVs are the future of the undersea community. You can deploy an AUV and have it go somewhere that you can’t, and docking the vehicle back in the submarine will require the very things I am studying in the Arctic,” he said.

NPS Research Assistant Professor Noel Du Toit, with NPS’ Department of Mechanical and Aerospace Engineering, is also focused on underwater robots. He is using an Aquius vehicle that has been modified to operate autonomously while conducting close proximity, diver-assist operations.

“We have modified this vehicle so that we can do a fully autonomous run. For example, we would tell the vehicle that we want it to go from this location to that one, and push a button … It’s a fully autonomous tethered AUV,” said Du Toit, so the AUV executes its mission without intervention.

“One of the big challenges for us up in the Arctic is that we are deploying from an ice hole on a moving ice flow. We deploy our vehicles through the hole, but as we run our mission, the hole moves. When we come back, we have to come back to a different spot. Being able to execute these missions relative to that moving reference point is quite challenging,” said Du Toit.

But if CAVR’s techniques are perfected, they may drastically improve the safety of divers operating beneath the ice.

“Diving under the ice is a high-risk activity. You can’t just pop up to the surface when something goes wrong. When operating in high risk environments, it’s tremendously useful to have a platform like this that can keep an eye on the divers. It can hover next to them and provide real time information to the support staff on top of the ice,” said Du Toit.

While Du Toit and Horner are focused on the action beneath the ice, CAVR Research Associate Aurelio Monarrez Jr. will be turning his attention skyward as he attempts his Scan Eagle UAV’s furthest northern deployment.

“The typical operating envelope for this platform is between 20 to 120F degrees. At the ice camp, we are expecting temperatures between 0 and -40F. We will be testing the vehicle’s operating envelope in those conditions. It is rated to minus 25F, but it has never been operated in those types of conditions,” said Monarrez.

And while there are multiple reasons for the Navy and NPS to participate in Arctic research, NPS Research Associate and doctoral student Sean Kragelund seemed to sum up the thoughts of all of the students and faculty members participating in the exercise.

“Participation in ICEX presents a once in a lifetime opportunity to go up and perform really challenging field experiments in an operationally-relevant environment. We can take those lessons learned and bring them back and share them with other students at NPS and throughout the Navy,” said Kragelund.