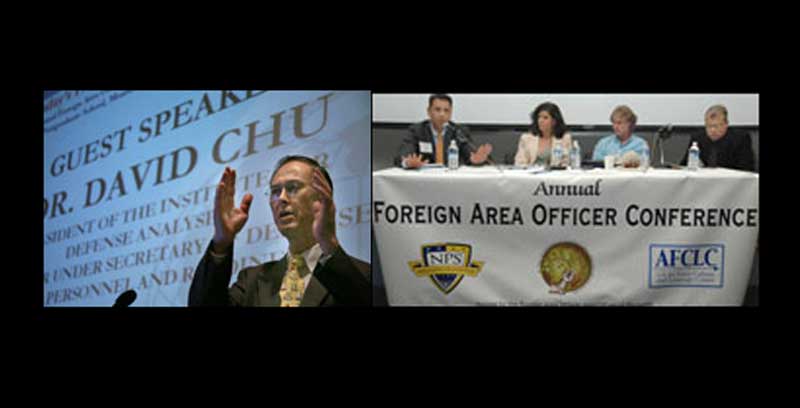 Originally built as a research project to gain a better understanding of the multifaceted aspects of the FAO community, the conference featured a number of military and civilian experts who addressed the event’s thesis, which states that FAOs must engage in all three roles – warrior, scholar and diplomat – to “best serve a key strategic objective of the National Defense Strategy; to ‘strengthen alliances and partnerships’ by developing partnership capacity.”

One of the conference’s primary guest speakers, Dr. David Chu, President of The Institute for Defense Analyses and former Under Secretary of Defense for Personnel and Readiness, spoke to students about how the Department of Defense (DoD) transformed its view of the FAO program over the last decade, and what its goals are for the community.

Chu credited former Secretary of Defense Donald Rumsfeld – who said military establishments were focused too heavily on “old Europe” and not on the future – for challenging DoD to rethink the kinds of language and cultural competencies it wanted from its officer corps.

With the military’s increased emphasis on “soft power” and international partnerships, Chu said the Department soon recognized that language fluency and cultural expertise were essential military skills, and began viewing them as “personnel assets for the Department as a whole,” rather than components of the policy community.

As a result, the number of FAOs has increased by 50 percent in the last three years. And in the next five years, DoD expects 1,100 more FAOs to enter the community, which currently has 1,800 officers serving in the field.

Additional guest speakers and panelists shared their experiences, knowledge and skills with students, addressing specific topics such as diplomacy with host-nation military and civilian leadership, past and future roles of FAOs in combat and conflict, FAO training programs and academic development, career development, and cross-cultural competence. Breakout sessions with subject matter experts focused on issues specific to each of the armed services and regions of the world.

“Students will not learn everything about the field directly through their curriculum,” said Marine Corps Maj. Maxx Godsey, the conference operations director, “so we wanted to provide as many windows as possible that student FAOs could look through to see themselves more clearly in the future.”

The FAO association, which is comprised mainly of students from NPS and the Defense Language Institute, serves as a joint-learning and networking organization for all U.S. services, providing forums for discussion and promoting interaction among officers outside the classroom.

Marine Corps Maj. Ryan Crais, the FAOAM Chair, said the association not only hosts the annual FAO conference, but also brown bag sessions with professors and a number of other events to support professional learning and interaction.

Crais was encouraged by this year’s conference and said it provided “a sense of reality” for the types of assignments and challenges FAOs encounter. “Meeting with and listening to the guest speakers really gave us a sense of mentorship, and it was a great opportunity to network with experts from the field,” he said.

Crais said one of the themes that presented itself throughout the conference was the recognition from commanders that FAOs possess skills, advice and expertise that are critical to their missions in the battlefield.

“In a post-9/11 environment, a FAO’s role as a warrior, scholar and diplomat is expanding in dramatic and robust directions,” he added. “The education and training at NPS are providing the FAO students with a very realistic, analytical and flexible framework through which to look at the current problem sets our commanders are facing on the battlefield … the FAO is truly a political, military and cultural advisor, and the NPS education is a key requirement for that.”