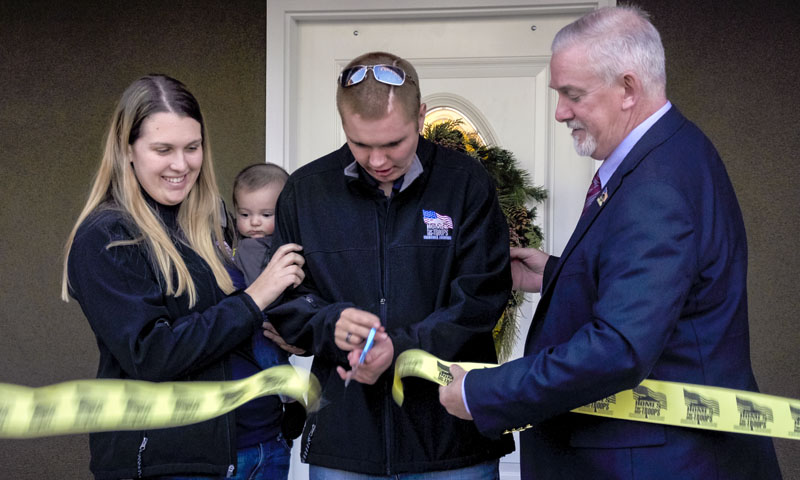 Army Sgt. Brian Jergens, center, cuts the ribbon on his new home during an emotional ceremony in Hollister, Calif., Dec. 12. Through the tireless efforts of hundreds of volunteers, including a large contingent of NPS defense analysis students, national non-profit Homes for Our Troops provided Jergens and his wife Jennifer, left, with a new, free custom home.

Students from the Naval Postgraduate School (NPS) and nearby Defense Language Institute Foreign Language Center (DLIFLC) joined the regional community in welcoming Army Sgt. Brian Jergens and family to their new home during a ribbon-cutting ceremony in Hollister, Calif., Dec. 12.

The home was donated by Homes for Troops, a national non-profit organization founded in 2004, and was built by members of the local community including a cadre of volunteers from both NPS and DLIFLC. Homes for Troops has built and donated 155 homes in the last 10 years to wounded service members.

While deployed to Afghanistan in 2011, Jergens was severely injured by a roadside bomb in the Uruzgan Province. The improvised explosive device that ripped through his vehicle blew off both his legs below the knee, broke his neck, and injured his brain, hearing and internal organs.

Despite the trauma, or perhaps because of it, Jergens remembers nothing of the long road home that took him from field hospitals and medical centers in Afghanistan to Landstuhl, Germany and then to Brooke Army Medical Center in San Antonio, Texas. In fact, he does not remember Afghanistan at all.

“I don’t remember what happened until I look down,” quipped Jergens with his ever-present smile and infectiously positive attitude. “Thank you for coming, we are so excited that all of you are here to share this day with us.”

Jergens and his wife are working hard to reclaim their lives and to raise their young family in Hollister, and the community has welcomed them with open arms. The ribbon-cutting ceremony was attended by the mayor, the chief of police, city council members, a local Boy Scout troop, members of the Patriot Guard Riders, and even Santa Claus himself.

“You are going to get the key to your home, and I am very excited for you. But I have a better key for you, the key to our city,” said Hollister Mayor Ignacio Valazquez. “A lot of people have asked for this key, but it only belongs to heroes and that’s what you are.

“You have brought our community together in a way that I have never seen before, you have changed our community for the better,” he continued.

Valazquez went on to share bits of a conversation that he had with Jergens months earlier.

NPS defense analysis student, U.S. Air Force Maj. Jeff McMaster of Fort Worth, Texas, was one of many volunteers to work on the Jergens family home

“I was both surprised and happy to see the number of volunteers, there was easily 200 people who showed up with smiles on their faces and ready to work. It was really something to see,” said McMaster.

“It was a great chance to give back to someone who has sacrificed so much, someone who maintains a great attitude and who is such an inspiration despite the severity of his injuries. It was a privilege,” McMaster added.

U.S. Army Maj. Alex Williams of San Diego, Calif. coordinated much of the NPS contributions to the volunteer effort for Jergens.

“All of us have friends, colleagues and comrades who have been injured or damaged in some capacity,” said Williams. “It’s kind of cathartic for us to see that people do get better. The courage of this Soldier and his wife is truly inspiring … it puts your own problems into perspective.”

And Williams adds that he and his colleagues shared that perspective with their own loved ones, bringing spouses and children to the home site.

“Serving is a family affair and it’s important for our kids to see that we take care of our own, that service is not something that ends when a veteran separates from the Army,” said Williams. “We owe a debt of gratitude to these Soldiers.

“When all of the fanfare dies down and these people start getting back to their daily lives, things are going to be very difficult. These Soldiers need to know that they have somewhere to turn, that there are people out there that they can contact. We are in this for the long haul,” continued Williams.

Both McMaster and Williams acknowledged that none of this would have been possible without Homes for Troops.

“We are strongly committed to helping those who have selflessly given to our country and have returned home with serious injuries since September 11, 2001,”said Homes for Troops Community Outreach Coordinator Autumn Hotaling.

“We assist severely injured Veterans and their families by raising money, procuring building materials, providing professional labor, and by coordinating the process of building a home that provides maximum freedom of movement and the ability to live more independently,” continued Hotaling. “The homes provided by Homes for Our Troops are given at no cost to the Veterans we serve.”