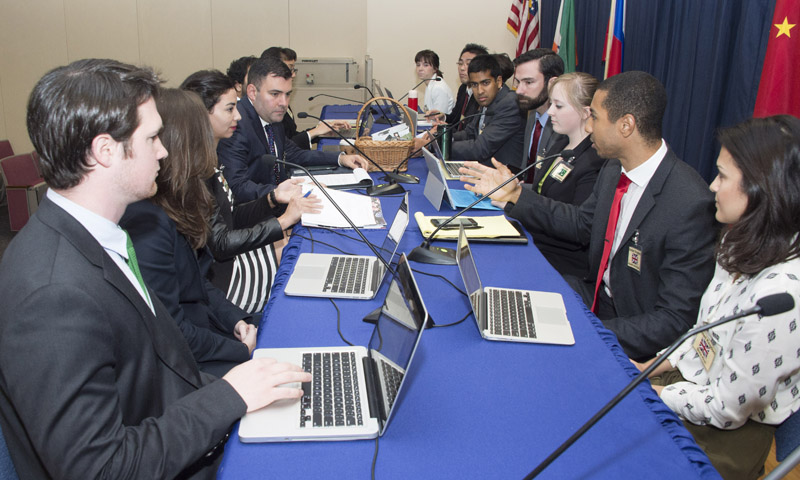 NPS students join their peers from the Middlebury Institute of International Studies (MIIS), California State University Monterey Bay, Stanford and the University of California, Berkeley for a briefing on negotiation during the International Strategic Crisis Negotiation Exercise (ISCNE) on the MIIS campus, Feb. 26. Developed by the U.S. Army War College, ISCNE events are hosted across the nation to provide graduate students with an immersive educational experience in crisis negotiation.

Imagine trying to resolve a conflict that has been going on for decades, where all sides are firmly and passionately entrenched in their own diverse perspectives. Thanks to a program created by the U.S. Army War College, that is exactly what students from Naval Postgraduate School, Middlebury Institute of International Studies (MIIS) at Monterey, California State University Monterey Bay, Naval Postgraduate School, Stanford and the University of California at Berkeley did during the International Strategic Crisis Negotiation Exercise (ISCNE) held on the MIIS campus, Feb. 26-28.

The ISCNE was created 12 years ago by the U.S. Army War College, and has been hosted at 15 locations across the country with the intent to teach graduate students the fine art of crisis negotiation.

“We want to bring the best political minds, and match them up with the best military minds … If we can start working together now, then later when many of you are working for the State [Department] or other agencies, you will be more inclined to talk to your military partners about flexible deterrent options," explained Army Col. Dave Price, director for senior leader education at the U.S. Army War College.

All students selected for participation in the ISCNE are emerging national security professionals at the graduate school and young professional level.

“This exercise gives these students and soon-to-be future diplomats an opportunity to crisis negotiate at the strategic level,” said Army Lt. Col. Chris Wendland, an Army War College Fellow at MIIS. “It’s about honing diplomatic and negotiation skills within a real-world frozen conflict.”

The exercise included many events that occur in real-life diplomacy, such as an opening meeting at the United Nations, myriad negotiations, and stringent time limits.

“There are religions, national agendas, and lack of trust issues, so they have a lot to overcome in a very short period of time,” said Wendland.

During two full days of back and forth negotiations, the teams looked to de-escalate the crisis by working on short-term solutions, such as humanitarian aid and a commitment to addressing long term structural and security issues.

“There have been many obstacles, some we expected, and other things we had to work through,” said Army Maj. Josh Russo, an NPS student in the Department of Defense Analysis. “It has been interesting to see how each delegation has worked toward a solution, with much progress coming when many countries sit down at the negotiation table.”

In spite of their best efforts at the negotiation table, the student groups were unable to determine a final, mutually-agreeable resolution; however, the value of effort was not lost.

“This event at the Middlebury Institute was definitely one of the better events over the program’s 12-year history,” said Price. “I enjoyed the interaction with the students, they came here with their minds open and ready to go. This group executed in an extremely interesting fashion, not everything goes the way you expect it to, however this group achieved more results then expected.”