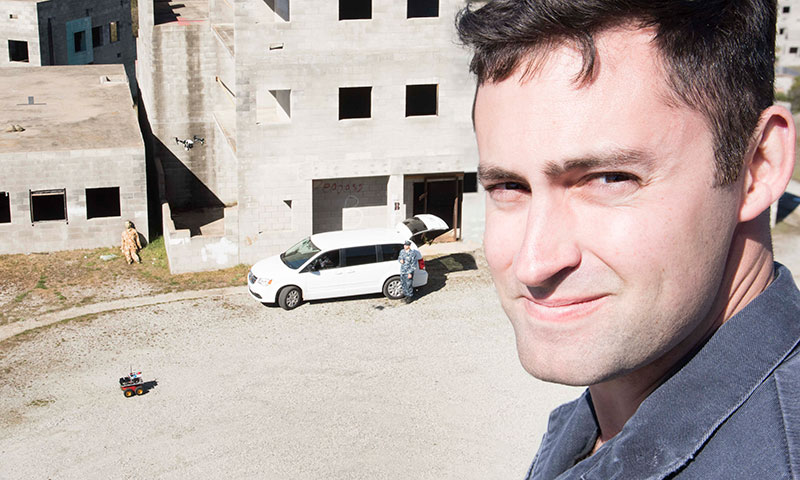 NPS Systems Engineering students are taking advantage of the nearby Military Operations in Urban Terrain (MOUT) facility on the former Ft. Ord, also known as ‘Impossible City,’ to test and evaluate their research in ad hoc networking and autonomous control of unmanned systems.

“In this Concept of Operations, the team used an unmanned ground vehicle (UGV) and an unmanned aerial vehicle (UAV) to conduct a search and rescue mission to find and steer to a person in distress (PID) autonomously,” said Professor Oleg Yakimenko.

The mission included a mannequin, substituting as an injured person, which was placed in an unspecified location. The team then utilized UAVs to scan the area from the air, helping ground vehicles locate and track the simulated wounded solider in tandem, all connected by a network the team deployed.

A portion of the team focused on a portable, deployable wireless network all from commercial off the shelf routers, conducting extensive testing in the lab on campus before field testing it at the MOUT. Other students focused on coding, writing the ‘software’ that would tell the autonomous systems what to do to locate the mannequin.

"Army Capt. Todd Howe and Lt. Travis Turner developed over 1,000 lines of operating code in a self-taught, open-source programming language,” said Lt. Rob Hall, one of eight members on the team. “The team utilized their strong systems engineering background to offset their relative inexperience in the fields of networking and robotics.

“The team spent over a month conducting subsystem testing, including power, signal strength, signal propagation, and signal latency,” he continued. “This project would not have come to fruition in such a short period of time without the determined effort of every member on the team."

The experimentation wasn’t flawless, but it teaches the students the fundamental concepts required for a set of technologies that will be on the not-so-distant battlefield.

“This exercise marked the culminating event in a series of three consecutive project courses that the SE cohort has worked on for three academic quarters,” added Yakimenko. “This brought together several disciplines that had to be learned quickly.”