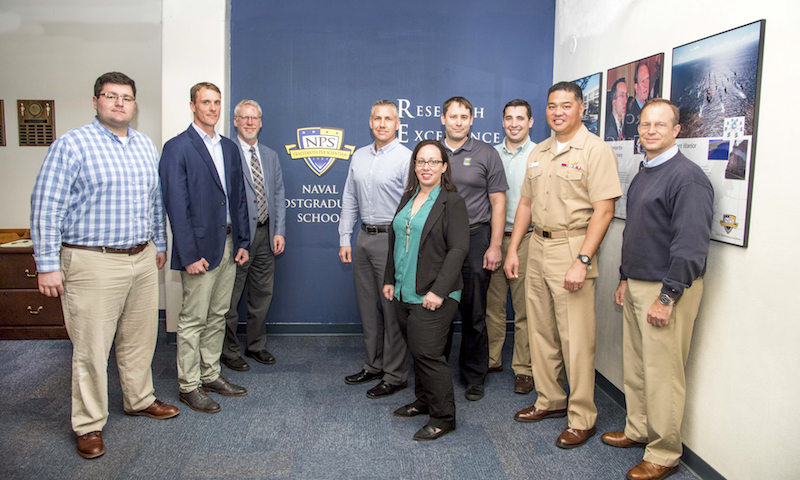 U.S. Navy Capt. Mel Yokoyama, Commanding Officer of the Space and Naval Warfare Systems Center Pacific (SSC Pacific), met with NPS students who have been selected for participation in the (SSC Pacific) Fellowship program during a campus visit, Jan. 31.

Yokoyama, himself an NPS alumnus, along with J.D. Morrison, Liaison for Naval and Industry Research Partnerships, congratulated the six students on their selection, and offered a few tips on what to expect from the experience.

“What’s astounding about the program is not only being able to work with the scientific community at SPAWAR, but also in receiving a stipend of $10,000 that each student gets to apply towards their research,” said Morrison. “They will be assigned a senior SSC Pacific scientist or engineer mentor to facilitate close collaboration with prominent government researchers in the NPS students’ specialty areas, and will have access to SSC Pacific laboratory and high-performance computing resources. The fellowship appointments are for a 12-month period.”

The fellowship represents an effort to promote partnerships with NPS that address SSC Pacific research focus areas, with submissions reviewed by SSC Pacific scientists based on their application to the organization’s priorities and capabilities. The SSC Pacific Fellowship program was established with NPS more than 23 years ago, with former university Dean of Research, Dr. Paul J. Marto, serving an instrumental role in establishing the alliance.

Yokoyama himself has a lengthy history with the fellowship. In 1997, then Lt. Yokoyama submitted his own proposal and was accepted into the mentorship program during his studies at NPS. Now 20 years later, he returned to campus to personally welcome each of the students with his own encouraging message.

“I wanted to meet you face-to-face, because I want to make sure you get the most out of this mentorship opportunity. It will change your life, if not within these brief 12 months, but certainly in the years ahead. The experience changed my whole way of thinking on how we in the Navy conduct research,” said Yokoyama.

One of the six fellows selected, Lt. Anna Hook has been asked to switch gears from her previous focus on electro-optical analysis of near surface atmospherics to focus on refractivity from radar (RFR). She says that she is up to the task even though it will be a departure from her initial thesis work. Most recently, Hook conducted observations with the Coupled Air Sea Processes and Electromagnetic Ducting Research (CASPER) program off the coast of Port Hueneme, Calif., as part of a team under the direction of NPS Professor Qing Wang.

“My new master's thesis topic and SSC Pacific Fellowship topic will be on RFR. Using signals from the Automatic Identification System (AIS) – what ships use to identify themselves and send their position to others to avoid collisions – S-Band radar, and other frequencies, we can retrieve continuous refractivity profiles in the atmosphere,” explained Hook.

“The Navy cares about environmental refractivity because it has a significant impact on the observed power levels of radio frequency signals transmitted. I will be using data from the CASPER West field campaign to analyze the refractivity profiles to see where the in-situ measurements diverge from the RFR retrievals,” she added.

Hook says she is honored to be selected for the fellowship, and looks forward to meeting with her new mentor at SSC Pacific, Ted Rogers, who will bring her up to speed in refractivity data fusion.

“The Navy is giving me the opportunity to earn a master's degree, so I want to be sure that I'm making the most out of my time here,” Hook said. “I loved working with Dr. Wang ... She is so dedicated to her research and is such an inspiration. I'm just happy to be a part of it.”