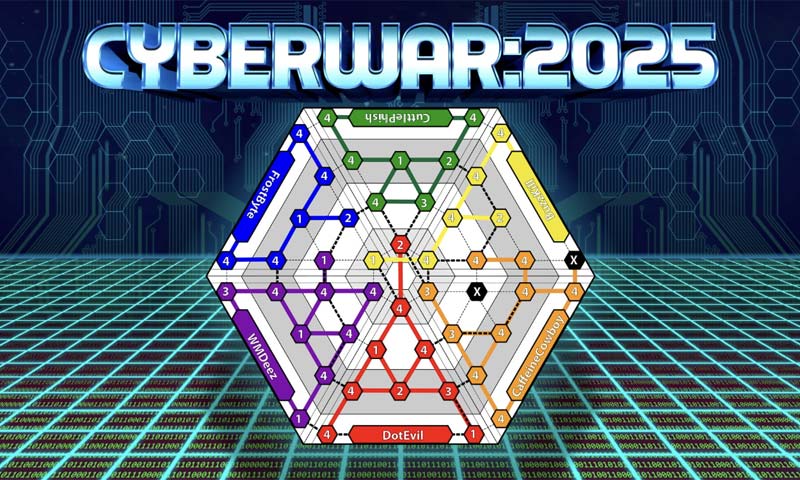 CyberWar: 2025, created by NPS graduates U.S. Army Master Sgt. David “Ty” Long and Capt. Chris Mulch, has been used in the classroom at NPS, but the students hope to soon see the application available to a broader DOD audience with further development.

Two Naval Postgraduate School students have created a way to bridge a training gap in U.S. military cyber operations … through a game.

For their master’s thesis, U.S. Army Master Sgt. David “Ty” Long and Capt. Chris Mulch designed and developed CyberWar 2025, a computer-based strategy wargame which challenges players to navigate through the core concepts of the cyber realm.

“The goal of CyberWar: 2025 is to stimulate and increase players’ knowledge and experience of cyberspace operations,” Mulch said. “The basic idea is to learn as you play.”

In approximately 30-60 minutes of turn-based, ‘sandbox’ gameplay, players employ a range of the basic concepts laid out in Joint Publications 3-12(R) Cyberspace Operations. A deft combination of offensive cyber operations (OCO), defensive cyber operations (DCO) and computer network exploitation (CNE) can lead a player to victory, even if in a relatively weak position.

“Everybody starts out on a level playing field,” Mulch explained. “Players utilize resources in a way they see fit, whether those resources are put into offense, defense or reconnaissance.”

Long and Mulch developed CyberWar: 2025 at a critical time.

A sense of urgency has burgeoned in the United States over the last decade as adversaries – state and non-state actors alike – have increasingly turned to the cyber domain to actively work against U.S. national security interests.

In a recent speech at John Hopkins University, Secretary of Defense Jim Mattis reiterated that the Department of Defense (DoD) absolutely must “invest in cyber defense, resilience, and the continued integration of cyber capabilities into the full spectrum of military operations.”

"Our competitive edge has eroded in every domain of warfare—air, land, sea, space, and cyberspace," he said. "And it is continually eroding."

President Trump echoed this in his fiscal year 2019 budget request to Congress, calling for a 4.2 percent increase in the Pentagon’s cyber funding to $8.5 billion as U.S. Cyber Command approaches full operational capability as a newly-unified combatant command.

“What’s going on in cyber policy is a big question right now in DOD,” Mulch said. “What does our competitive balance look like? Should we be strong? Should we be putting time and resources into defense, reconnaissance or research?”

And yet, there remains a critical gap in how DoD goes about preparing the military to engage in this domain. Several educational courses and training exercises have been developed to prepare leaders to plan and execute cyberspace-based effects to support operations, but there are no virtual simulations used by the military to train and educate service members in the basic concepts of cyberspace operations.

When Long, a cyber warfare practitioner at Fort Meade, and Mulch, an Information Operations Officer, arrived at NPS in June 2016 to begin their graduate work in information strategy and political warfare, it didn’t take them long to turn to solving this.

“People would say I’m the cyber guy, even though I really don’t like that term,” Long said. “When I came to NPS, my promise to myself was to [impact] the Army cyber mission; I had a lot of ideas about how we can educate people about cyber operations, and how we could do it correctly.”

Attending a game theory course, they encountered an article exploring the strengths and weaknesses of American cyber capabilities vis-à-vis Russia and China. Over spirited arguments over how much emphasis the U.S. should be placing on offense, defense or reconnaissance, the kernel of CyberWar: 2025 was formed.

“We used game theory to explore that, but that was the basis of ‘hey, I think we have a question here that we could look into,’” Mulch said.

Coming up with a game was not too far a stretch: the U.S. military has a long history of using games to prepare, understand and even plan for war. The earliest use of wargaming in the U.S. dates back to 1883, when Maj. William R. Livermore used topographical maps to practice the art of war. Livermore’s work was itself based on Kriegsspiel, a tabletop game the Prussian military had used since 1812 to train its officers.

However, such gaming is not just “beer and pretzels,” Long stressed. Serious games, which academic literature refers to as “gamification,” are played to stimulate creative thinking, decision making and problem solving to learn. Good gamification allows players to synthesize new knowledge and make critical judgements.

“With CyberWar: 2025, what we’re really looking at, other than reinforcing terminology, is letting people learn through discovery what the relationship between cyber effects is,” Mulch said.

“In a nutshell, that’s what CyberWar: 2025 provides ... An interactive experience for you to reinforce concepts and potentially look at other ways to solve a problem,” Mulch said.

The game, he said, is intended to feel like Diplomacy, the classic 1954 strategy board game which relies as much on player interaction as moving pieces around a board.

At the beginning of CyberWar: 2025, six players are randomized for anonymity, so you could be sitting next to somebody, but not necessarily be located next to them on the board.

Play then proceeds simultaneously by round, with each player submitting their orders, which are resolved all at once before the next round.

“The players communicate with each other and maneuver around the map, which consists of 48 interconnected ‘server nodes’ that are represented by hexagons,” Mulch explained.

As players capture new server nodes, they gain points which they then use to either conduct an action (OCO, DCO or CNE) or research three tiers of new, more advanced effects for these actions.

“The more points you have, the more you can put into effects, and then you can use these to launch attacks against your adversaries and so forth,” Mulch said.

The game play is simple and intuitive, but there’s a lot going on under the hood.

When all players have submitted their orders, the software engine running the game sorts their input, calculates each of their actions, analyzes the results and then broadcasts these back to the players within a split second.

“What we accomplished over a tight nine-month time frame was to effectively pack ten pounds of product into a five-pound product bag,” Long said. “You learn by making mistakes: you can explore multiple paths and if you make a mistake, that doesn’t mean you lose the game.”

From inception, Long and Mulch designed the game to be applicable for all branches of DOD and their subordinate cyber fields, as well as an educational tool for decision makers and leaders on cyber policy.

Since their thesis was published in December 2017, CyberWar: 2025 has been successfully adopted in cyber courses at NPS, though Long and Mulch would like to see it become more widely available.

“The way forward is to have it incorporated into cyber education courses across the services,” Mulch said.

It also has great potential as refreshment training, the duo said. For service members who’ve already received cyber training, yet haven’t practiced it for some time, CyberWar: 2025 serves as an efficient tool to get them back up to speed prior to deployment or a training event.

CyberWar: 2025 has been effectively used in the classroom at NPS, but the students hope to soon see the application available to a broader DOD audience. With further development, incorporating computer-controlled players, Long and Mulch see the opportunity for a DOD-wide training tool.