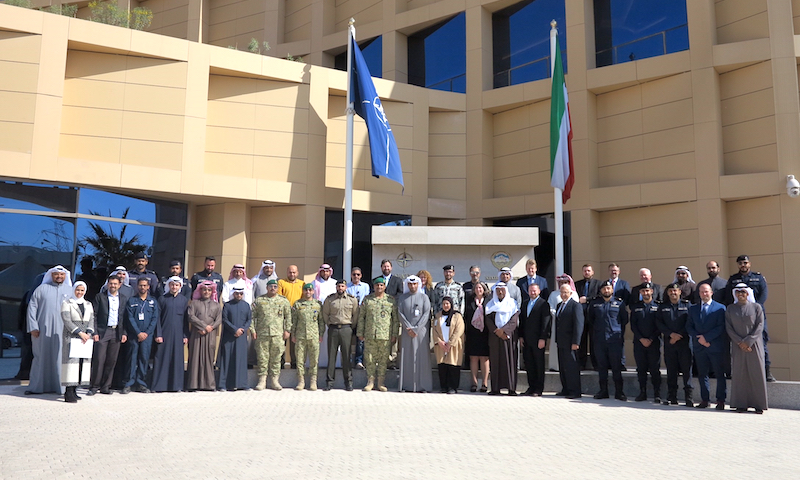 Participants in a weeklong course on critical energy infrastructure protection, developed in part by NPS’ Energy Academic Group, are pictured outside the NATO-Istanbul Cooperation Initiative Regional Centre in Kuwait in February 2018.

The week-long Critical Energy Infrastructure Protection Course, held at the NATO-ICI Regional Centre in Kuwait, was designed in part by NPS’ Energy Academic Group (EAG), after officials from the university joined a NATO exploratory delegation to Kuwait in September.

“We proposed a course on critical energy infrastructure and resilience, as this is an area that is important to the Navy and the Department of Defense, and something we’ve got strong expertise in within NPS,” said Alan Howard, Deputy Director with the NPS EAG.

Upon returning, Howard set to work inside the EAG designing and developing the course to include experts within NPS and international partners within NATO. The course focused on evolving cyber threats to critical energy infrastructure, approaches to resilience, the link between energy and geopolitics, as well as methodologies for risk analysis and mitigation.

“Developing and delivering courses such as this one helps NPS build on and improve our capabilities, offers more opportunities for hands-on learning and application of knowledge for our students, and improves awareness of NPS and the diversity of our educational offerings,” Howard said.

More than 30 participants from across the region attended the course, which was co-organized along with NPS by the Kuwaiti government, the NATO School in Oberammergau, the NATO Energy Security Centre of Excellence in Vilnius and NATO’s Emerging Security Challenges Division.

Since January 2017, the NATO-ICI Regional Centre has served as the focal point for training, education and international cooperation between NATO and ICI partners in the region, including Bahrain, Kuwait, Oman, Qatar, Saudi Arabia and the United Arab Emirates.

The ICI was formed at the 2004 NATO summit in Istanbul, Turkey to promote practical security cooperation activities between member states as they respond to the new challenges of the 21st Century.

Howard adds that the course has significant application within the U.S. and other international partners. For example, after the 2017 hurricanes devastated critical energy infrastructure in the U.S. Virgin Islands, the Federal Emergency Management Agency approached NPS for help as they lead reconstruction efforts.

“Ensuring islanded and remote locations - such as the Virgin Islands - have resilient infrastructure is important to the Navy, as we rely on many locations such as these for our logistical and operational needs,” Howard said.

Looking ahead, in March of 2018, the EAG, led by Dan Nussbaum, and NPS’ Center for Infrastructure Defense, led by Dr. Dave Alderson, will bring NPS students to the Virgin Islands to begin analysis on building more resilient infrastructure. The group will also meet with Virgin Island leadership to talk about how educational courses could help them better weather the next storms.