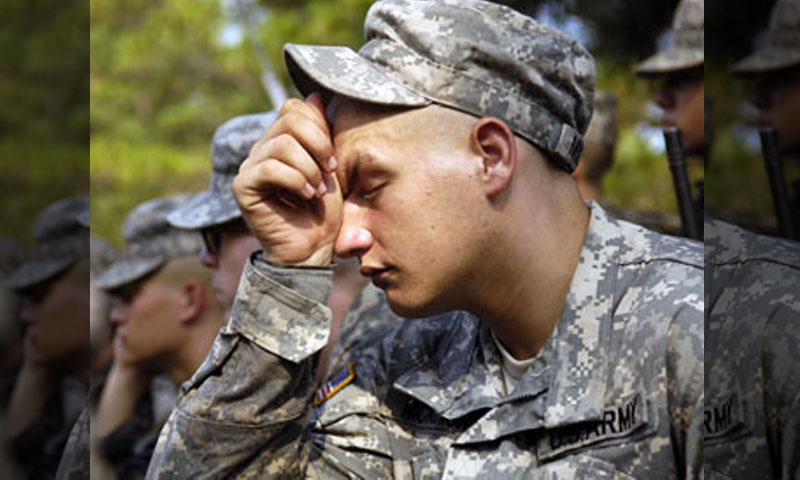 The Army calls on its Soldiers to “be all you can be.”

In a major step to bring this slogan to life, a Naval Postgraduate School team has found that shifting the sleep schedule of new recruits to better match their natural biological rhythms can have an immediate positive impact on training effectiveness and performance.

The results were striking. “The experimental group got better sleep and was better rested,” said Miller, former co-director of the NPS Center for Human Systems Integration (HSI) and chair of Tvaryanas’ dissertation committee. “And being less fatigued, they’re also less likely to get sick or to have accidents, since sleep is known to be related to immune response and safety.”

The intervention group slept an average of 5.9 hours versus 5.3 hours, more than half an hour longer than the control group, resulting in better sleep hygiene and more efficient sleep, according to Tvaryanas.

“By their own self-reports, the intervention group woke up more rested and in a better mood with better motivation, and their marksmanship scores improved faster and more overall,” he said. “By chance, the experimental group started with lower marksmanship aptitude but improved quickly, and the rate of improvement was positively correlated with sleep.”

“Army basic trainees are teenagers, and teenagers are ‘owls’ -- they naturally go to sleep late and get up even later,” Miller said. “If you adjust the sleep schedule so it lines up with their physiology, they do better on a whole range of measures.”

“Lessons learned from Iraq and Afghanistan led the Army to a basic training overhaul that began this spring, with an increased emphasis on marksmanship, physical readiness, combat field training and core-values-and-culture – and more sleep,” Tvaryanas noted. [The new skills and drills alignment will also be taught to officers and operational units.] “In this study, we didn’t add more sleep, we only shifted the schedule, which resulted in Soldiers getting more actual sleep with positive effects on learning and performance without necessitating any change in the content or duration of training activities.”

“For the Army to make this kind of change is a major paradigm shift,” said Miller. “Sleep deprivation is common in military training and is even designed into it on the assumption it will toughen recruits and prepare them for the harsh conditions of the battlefield,” Miller said. “But you have to look at the other side as well – what’s lost when recruits and deployed personnel don’t get enough sleep – marked reductions in shooting accuracy, in the memory and attention needed to process orders and make sound decisions, and in a number of other key operational measures. We don’t let teenagers drive a car when they’re fatigued, yet we deprive them of sleep and send them out with guns.

“It’s not lowering the bar or ‘going soft’ when we shift basic trainees’ sleep schedules to match their natural physiology,” Miller continued. “We’re actually hardening them, but in a smarter way.” 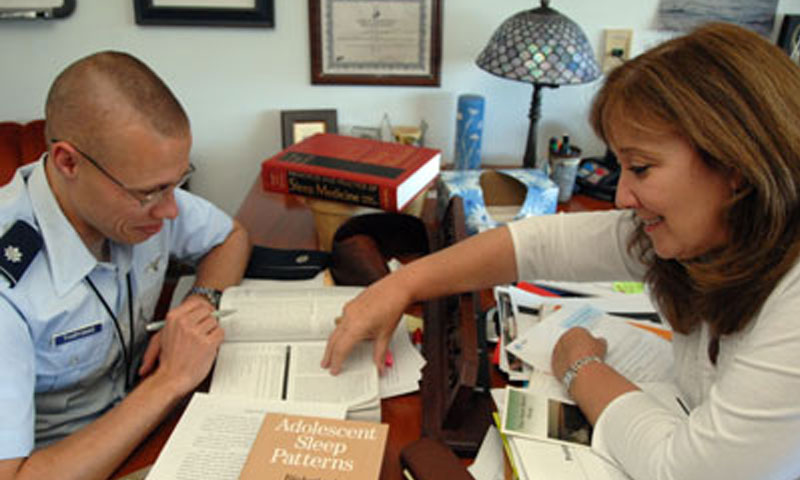 The Naval Postgraduate School sleep study was championed by then Commanding General of Ft. Leonard Wood’s U.S. Army Maneuver Support Center, Maj. Gen. Gregg Martin, who stressed the importance of the military’s teaming with industry and academe to harness the nation’s brainpower.

“Professor Miller and her team are doing great studies on the effects of sleep deprivation on military performance,” Martin said. “As a result of their work at Fort Leonard Wood and elsewhere, we’ll know the best schedules to ensure the greatest strength and resiliency of our force – not just the physical aspect, but the mental and spiritual as well.”

“Come partner with us,” he said. “We’d love to work with you on your master’s or Ph.D. Fort Leonard Wood trains not only the second largest cadre of new Army recruits – nearly 100,000 a year – but all branches of the U.S. military, the military police, and all National Guard units’ civil affairs teams in nonlethal weapons, counterterrorism, consequence management, and chem-bio. We also train NORTHCOM and are the most advanced center for IED training in the Army.”

“Fort Leonard Wood and General Martin were really serious and passionate about getting Soldiers ready and resilient for combat duty,” Miller noted.

The NPS sleep study was sponsored by the Leonard Wood Institute, a non-profit on-base science and technology research organization. The Institute has a cooperative agreement with the Army Research Laboratory to partner with industry and academe to solve training challenges facing the service.

“We were thrilled to work with Dr. Miller and her NPS colleagues on the Army recruits sleep study,” said the Institute’s Executive Director Joe Driskill. “The study’s findings are significant and among the best and most usable I’m aware of on the relationship between sleep and performance and should be valuable for commanders not just in the Army, but in other military organizations as well.”

“We’ll be introducing the results to Army leadership in the near future, and are discussing a variety of follow on opportunities with Dr. Miller in human systems integration and human factors research,” Driskill added. “For instance, we’re looking into how NPS can partner with the Army to provide certificated training courses both at Leonard Wood and around the country. This study is the result of a great partnership, and we look forward to further strong and close collaboration with NPS on how to make Army training more effective.”

The results of Tvaryanas’ research, “Effects of Sleep on Training Effectiveness in Soldiers at Fort Leonard Wood,” is one of six chapters in his dissertation on the broader field of Human Systems Integration.

Tvaryanas came to the Naval Postgraduate School with strong and unusual credentials. He earned his B.S. in chemistry from the George Washington University in 1993 and a Doctor of Medicine from the Uniformed Services University of the Health Services in 1997. In 2002, he received Master’s degrees in Public Health and Tropical Medicine from Tulane University followed by residency training at the U.S. Air Force School of Aerospace Medicine, which culminated in board certifications in both aerospace medicine and occupational and environmental medicine. Before coming to NPS, Tvaryanas was a human performance researcher and the Human Systems Integration lead for unmanned aircraft systems at the Air Force 311th Performance Enhancement Directorate.