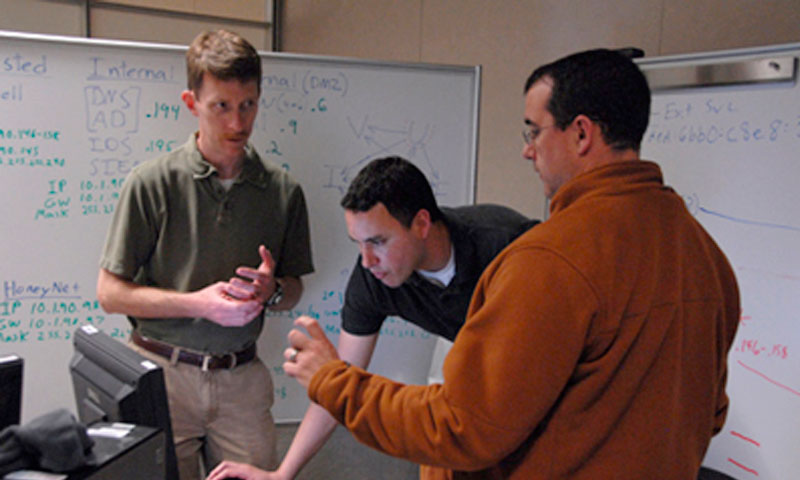 The CDX takes place annually throughout military educational installations in an effort to raise awareness of the importance of cybersecurity and provide experience through training for future DoD cyber warriors.

This year’s theme for the exercise was, “Defending a New Domain,” and was referred to as Operation NEWDOMAIN. This was a reference to the “Foreign Affairs” magazine article by Deputy Secretary of Defense William J. Lynn in which he highlights the challenges the military faces in today’s cyber world.

“Over the past several years, cyber defense has become significantly more important to the U.S.,” said Lt. Cmdr. Gene Albin, a student a NPS and the Executive Officer of the NPS team. “It’s critically important that students and young officers in our military in general learn more about cyber defense so that we can defend the networks that we have because we’re so dependent upon network technology in the military … we really need to be able to defend it.”

Albin made reference to the increasing demand for cyber defense not only for the DoD, but for the nation as a whole. NPS has recognized this importance and has been active in promoting awareness and training throughout its departments and classrooms. In one of its recent Secretary of the Navy Guest Lecture Series (SGL), NPS welcomed Mary Ann Davidson, chief security officer at Oracle Corporation, one of the largest software companies in the world.

“War fighting now relies on an IT backbone,” said Davidson during the lecture. “Information has become your force multiplier and now the network itself has become the battlefield.” 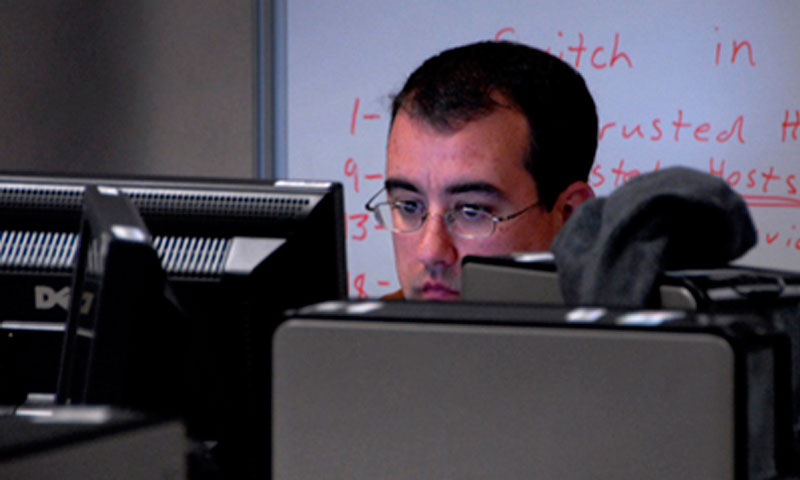 Although the exercise promotes competition between the participants, the importance of the exercise is not lost and goes far beyond school rivalries and bragging rights. For the students, it was an opportunity to get a glimpse of what awaits them in the real world.

The exercise takes place over three days in which the teams defend a network that they build specifically for the exercise. They defend their network from a series of attacks carried out by the NSA’s team, “Red Cell.” These attacks can be direct attempts at hacking but also can take the form of a user from within the network accessing malware or other such viruses or accessing infected hardware or software. In defending, they also have to maintain normal service to the network as in a real world situation.

“It’s not about how hard you make it to get into your network,” said Maj. Scott Voigts, a Marine Corps student at NPS and Commanding Officer of the NPS team, adding that the more realistic the game, the better the exercise.

The NPS team was sponsored by the Graduate School of Operational and Information Sciences (GSOIS), the Computer Science Department, and the Center for Information Systems Security Studies and Research (CISR). It consisted of both military and civilian students, and represented multiple branches of the services and disciplines within the school. The team spent months preparing for the exercise and many hours during the actual exercise defending their network in addition to their regular curricular duties.

Last year, NPS achieved the highest score but as a graduate school was ineligible for the trophy so it was the Naval Academy that officially won the competition. This year, it was the West Point cadets that took the honors, making it their sixth win since the competition started.