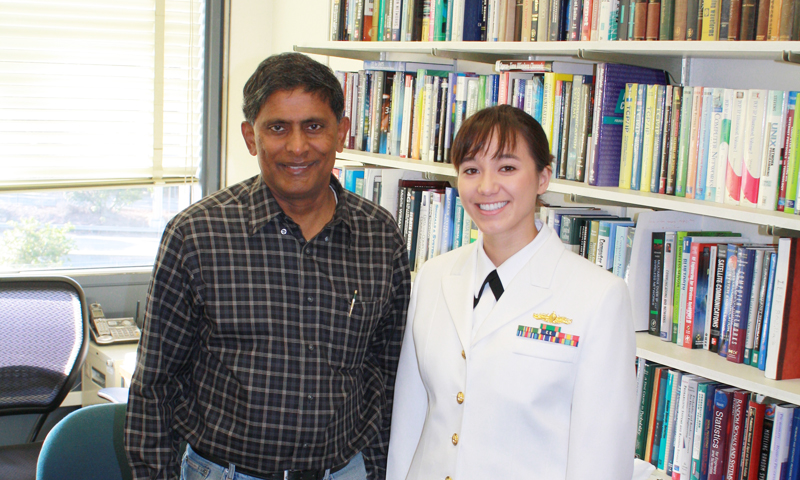 Former Naval Postgraduate School (NPS) student Kaylene Carter and NPS Professor Dr. Murali Tummala are pictured in his Spanagel Hall office. Carter and Tummala, along with Dr. John McEachen with the university’s Department of Electrical and Computer Engineering and Rohan Ramlall with the Space and Naval Warfare Systems (SPAWAR) Center Pacific, were recently awarded a patent for a geo-positioning method that uses digital TV signals.

The team’s invention utilizes broadcast digital television (DTV) signals to determine a user’s location, and has both military and civilian applications as it may fill a need for accurate positioning data in GPS denied environments.

“I still can’t believe that I hold a patent. It’s something that I never expected, and I am so humbled and excited for our team who accomplished this,” said Carter, who led the effort.

“DTV transmitters are a passive system, broadcasting signals which require no feedback from the end user. This is an approach using a commonly available signal that could give us fairly high precision location under certain circumstances,” explained McEachen.

“The Navy relies on GPS for everything, from targeting to positioning, and our adversaries know that,” he continued. “Television signals are always around, and they tend to be global. We can leverage the fact that there are existing signals in the environment to help us locate ourselves, in the event that we can’t locate ourselves using GPS.”

The invention also offers an advantage in urban areas where modern, asymmetric battles are increasingly waged.

“GPS requires a line-of-sight path to the satellite, which doesn’t work well in urban areas,” explained Carter. “TV towers are stationary and thousands of miles closer than the satellites that GPS relies on.”

“GPS fails if you jam it …TV signals are stronger and operate on different frequency bands,” added Tummala. “They can penetrate buildings, whereas GPS tends to fail and tends to be fairly weak [in indoor environments].”

McEachen and Tummala note that the team’s exploration of alternate uses of DTV signals and other signals on the electromagnetic spectrum is part of a larger effort within the Department of Defense (DOD) to enhance its capabilities in the area of electromagnetic maneuver warfare.

“This is just part of that agility in the electromagnetic spectrum. [If our adversaries] have jammed GPS, we can get our location information from digital TV … The idea is to stay one step ahead of the adversary, and these techniques allow us to be agile,” said McEachen.

Past work in this area has relied upon time of arrival positioning methods – a process whereby locations are determined by comparing the small differences between the time that a signal is transmitted and received by three different towers, and then plotting their paths on a map.

If a TV tower is transmitting a signal to your cell phone, and it is also sending that signal to a reference receiver at a different known location, you can compare the difference in received signal times.  That small difference in time allows you to determine how much closer or further you are to the TV tower than the reference receiver. If you complete that process with three different TV towers, you can determine your position, Carter explained.

But Carter and her co-patent holders discovered that they could determine their locations with only two signal sources using a process known as hyperbolic positioning. The process uses the reference receiver, rather than a TV tower as one of three sources required to determine one’s position.

McEachen and Tummala introduced Carter to the DTV positioning concept in support of her NPS education, but according to Carter, the patent process has made her time at NPS particularly exciting.  She and the rest of her team were quick to acknowledge NPS Patent Attorney Lisa Norris and SPAWAR System Center Pacific Patent Attorney Ryan Friedl, and their contributions to the team’s success.

“We could not have even gone down this road if it wasn't for our patent attorney. She is wonderful, and she has made these opportunities available to us,” said McEachen. “I think it is really good for NPS and the Navy to have someone like her that can allow us to transfer this kind of technology to industry.”

Since the patent filing, Carter has moved on from the Navy. She is currently studying medicine at Stanford Medical School, but hopes that she will be able to apply some of her engineering expertise to the medical field.

McEachen and Tummala continue to teach at NPS. In fact, they have multiple other patents pending in related fields. They hope that their team’s recent patent will be adopted by a defense contractor that is willing to produce it in a meaningful way for the DOD.