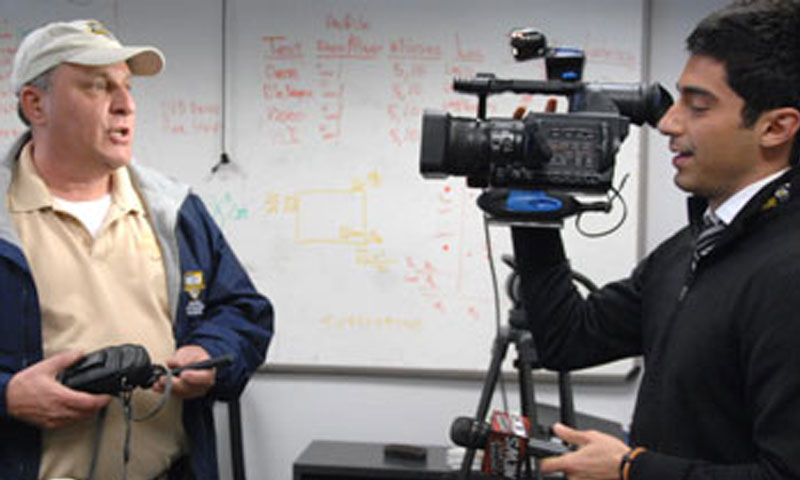 The Naval Postgraduate School is providing a critical component of humanitarian assistance and disaster relief to the people of Haiti struggling in the wake of the devastating 7.0 earthquake – desperately needed emergency communications.

“When you think of what’s urgently needed in an emergency like this, food, water, shelter and medical supplies are what usually come to mind and what you read about in the papers,” said Steckler, whose HFN Research Group also immediately responded to the 2004 tsunami in Southeast Asia and Hurricane Katrina in New Orleans. “But communications should be at the top of the list, because without them, you can’t coordinate the others. If you can’t communicate, you can’t operate. People can’t let their loved ones know they’re alive or need help or know where to get the food, water, shelter and medicines once they’re available; and emergency responders have difficulty finding out the areas of greatest need to know where to deliver the necessities.

“And the communications situation in Port-au-Prince really is dire,” he stressed. “Until this morning [Friday, Jan. 15], even the president of the country couldn’t talk to President Obama because he didn’t have a satellite phone. All regular [non-satellite] telephone communications are down due to fallen telephone lines and cable towers and cut underground cables due to the ground shifting from the earthquake.”

Into this informational black hole, NPS HFN Team Haiti is flying $350,000 of emergency communications equipment to fill the void and re-connect the people of Haiti to each other and the world.

“What we’re delivering will allow anyone and everyone to communicate,” said Steckler. “Our mission is to support the U.S. Government and military to bring rapid communications to the needed areas, working with Joint Task Force Haiti, in charge of the military side of the relief effort,” he noted. “Knowing our track record [in the S.E. Asia tsunami and Hurricane Katrina], the U.S. military has specifically asked us to go, and to show others how to do this for themselves.

“We’ll be taking 20 100-pound ‘fly-away kits’ in hard pelican cases, which we’ll be using to set up temporary Internet access infrastructure on the ground to provide voice [Skype], video, e-mail and data communications including tele-medicine via satellite link,” Steckler said. “We’re bringing four BGANs [Broadband Global Area Network satellite equipment] that can connect to the Internet in five minutes and generate 100-meter wireless ‘clouds’; four 9-foot-by-9-foot foldable solar panel tarps that generate 800 watts of power when there’s sun, and a wind turbine when there isn’t, to run the equipment; heavy duty Humvee batteries; and four satellite phones, which right now are like gold. With the WiFi ‘clouds’, we’ll create temporary Internet ‘cafes’ like the ones we set up in New Orleans parking lots after hurricane Katrina. And we can connect these ‘clouds’ using terrestrial WiMax long-haul wireless point-to-point networks extending up to 20 miles with antennas and radios operating at a broad bandwidth.

“And duct tape is our best friend,” Steckler laughed. “We use it for everything – to fix and install things – whatever. Duct tape is king.

“The equipment and the set up is the easy part,” Steckler noted. “It’s the people part – identifying leadership that can coordinate and communicate with the right people to get the mission done with the needed transportation and security – that’s the hard part.

As of their departure date, the team didn’t know if they’d be based on board the USS Carl Vinson aircraft carrier or in or around Port-au-Prince. “That’s TBD – to be determined,” said team member and Electrical Engineering master’s student Marine Corp Capt. Brandon Newell. “We’re used to not knowing in the Marines. We get on a ship or a plane, and find out what our mission is on the way or when we get there. Whatever’s needed, that’s why we’re here.”

“We’re going in expecting we’ll give and leave behind most of the equipment we’re taking, which is worth about $350,000, and we’ll be training the locals in how to use it,” Steckler said. “$350,000 may sound like a lot, but we need more, a lot more. We need double that.”

When asked what it feels like to be going back into a major disaster zone for the third time in five years, Steckler doesn’t miss a beat. “It’s a feeling you can hardly describe – having the technical know how and being in the right place at the right time.” And the support we’ve received from the Navy, NPS leadership, faculty and staff, and the [NPS] Foundation has been fantastic said Steckler, who was named an official Red Cross hero for his emergency communications efforts in the wake of Katrina.

“Secretary of State Clinton has said that communications is one of the highest priorities of our emergency response,” said Newell, who has served in both Iraq and Afghanistan. “Our biggest problem will be force protection, and the ability to get to the places that need emergency communications the most. We’re bringing a capability that’s in high demand, and trust those who call the shots to tell us where to go.

“This is a great opportunity to apply my thesis,” said Newell, whose research is on evaluating renewable energy software as a Marine Corps planning tool.

“We’re going to help the people of Haiti,” he said. “Pray for them, and give generously to the charity or relief organization of your choice that’s responding to the crisis.”

In addition to Steckler and Newell, the other three members of NPS HFN Team Haiti are Research Associate Ramsey Meyer, and Research Assistants Thomas (Foard) Copeland and Rosa Akbari.

“I’m expecting complete chaos when we get there,” Meyer said. “Yes, it’s dangerous, but we have to stay focused on the mission – to get the comms on the ground amidst all the chaos. Those comms are needed to save lives and help restore order.”

The NPS Hastily Formed Networks Team was created in response to the Southeast Asia tsunami, where Steckler and his group were on the ground in the area of devastation for 2-3 weeks each month for five months, and is specifically structured to respond to humanitarian disasters.

The NPS Hastily Formed Network team is part of more than 3,600 Navy personnel on the ground and on ships in the vicinity of Haiti in support of the relief efforts as of Jan. 15.