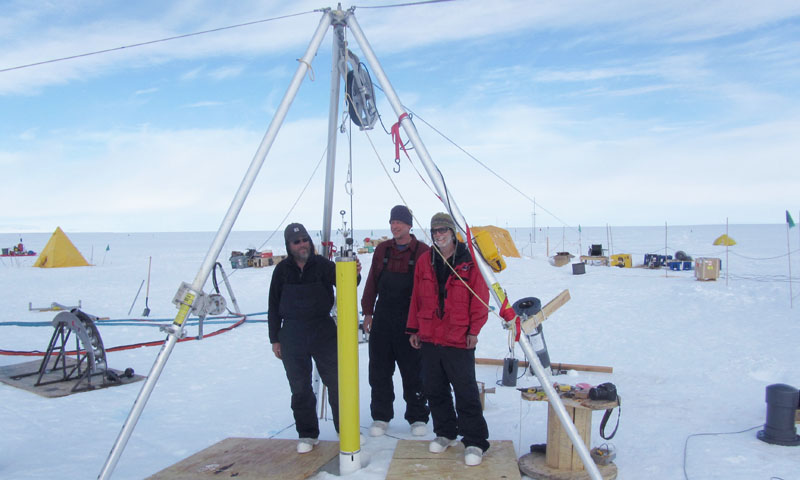 NPS research team members Tim Stanton, Bill Shaw and Tim Stockel deploy the ocean flux profiler developed in their research group at NPS down a 460m deep bore hole through the Pine Island Glacier Ice Shelf. The profiler will measure temperature, salinity and current profiles through the water cavity below the ice shelf every day over the next two years to study processes controlling ocean melting of the ice shelf. Photo courtesy of Tim Stanton.

For most, setting foot on a desolate Antarctic glacier would be a once-in-a-lifetime opportunity. And with its bone-chilling winds and uncomfortably low temperatures, once in a lifetime might be just enough.

But for a team of NPS researchers, a second chance to spend two months on a desolate ice sheet was a welcomed adventure. This year, unlike the last, is yielding previously unseen data on one of the Western Antarctic Ice Shelf ‘s (WAIS) most rapidly melting glaciers.

A team of researchers from the Naval Postgraduate School, Penn State, and the British Arctic Survey, sponsored by the National Science Foundation (NSF), hope that their data collected on Antarctica’s remote Pine Island Glacier will reveal invaluable information about how a melt water river flowing beneath the ice shelf may be the cause of the its rapid melting and lifting from the seabed. The NPS group, anxious to get out on the ice for the second and final year of the NSF-funded project, included NPS Research Professor of Oceanography Tim Stanton, Research Assistant Professor of Oceanography Bill Shaw and Oceanographer Jim Stockel.

“Why go to such a remote place to measure oceans interacting with ice? You could do that in Alaska. [But] there are three unique things about the Western Antarctic Ice Shelf. We know from satellite observations that the WAIS is moving and thinning very rapidly compared with other ice sheets. A huge amount of fresh water is being lost from that system every year,” explained Stanton. “That ice goes into the ocean, and is constrained by this narrow portal at the top part of Pine Island Ice Shelf, which is a choke point for the ice streams up on the continent.

“Because a lot more ocean heat is getting in under the ice shelf and melting it more rapidly, it is lifting up the ice shelf, letting that water go in even further, resulting in the grounding line lifting up even more,” he continued. “So that’s an unstable process. And as you lift it up, you reduce the drag on the ice shelf.  The ice is melting more rapidly, making it more buoyant and less sticky to the seabed. That’s allowing the ice to flow more quickly down from the ice sheet.”

NPS researchers have been preparing for years for the opportunity to deploy a series of specially-designed instruments on the Pine Island Glacier (PIG), which will monitor temperature and salinity, among others, after severe weather last year gave the team only two days on PIG to frantically do what research they could. The team was able to successfully deploy seismometers and GPS equipment in what little time they had in 2011, but this year’s trip proved to me much more successful, with six full weeks on the ground to deploy instruments and gather data.

“Once our boots were on the ground, our whole team of 12 people knew exactly what to do. And we made great time. We actually got all of the work done,” explained Stanton. “We weren’t even sure if we would get two sites deployed, but we got all three systems deployed. There were two other groups at the drill camps – one was doing seismic surveying from Penn State and a low frequency radar and another group from British Antarctic Survey was using a coherent radar to measure of melt rates. So we used three different ways of measuring the melt rates at the site. Previously there has only been speculation on what the melt rates are."

Each group had a specific goal for measuring the PIG ice shelf structure and melting rates, with the NPS team using gear they designed based on decades of combined experience and field research. After drilling two holes into the 500-meter thick ice shelf at three separate sites, two different instruments were deployed – the Ocean Flux Profiler and the Fixed-Depth Ocean Flux Package. Each will continue to gather and transmit data on ocean salinity, temperature and currents back to researchers at NPS. The parameters for data collection can be changed remotely as needed, to respond to changing environmental conditions and system power limitations.  If all goes well with the support structures positioned above the ice, the team expects the sensor packages will continue to transmit data for the next year or two.

“By having two-way communications with the instruments we can change the sampling if necessary,” explained Stanton. “Even with the underwater profiler, we can tell it to just go into different modes and we have done that several times already. This approach is based on the systems that I have been putting in the Arctic for 12 years.

“Essentially we want to be able to develop parameters whereby we can predict melt rates just by knowing what the ocean circulation and incoming heat is,” he continued. “This depends on how the buoyant flow is focused in these drainage channels that are observed under the ice shelf, and turbulent parameterizations of melt rates which we can plug into coupled ocean/glacier numerical models. And there really are a lot of groups wanting this information to improve these models.”

The team hopes that the research will help open doors for further understanding of Pine Island and other glacial systems.

“Hopefully, new insights into the physics of ocean-glacier interaction will lead to a better overall understanding of how the Earth's ice sheets are responding to climate change,” said Shaw. “This will then allow the science community to make better predictions on important issues such how fast sea level will rise is the coming decades.”