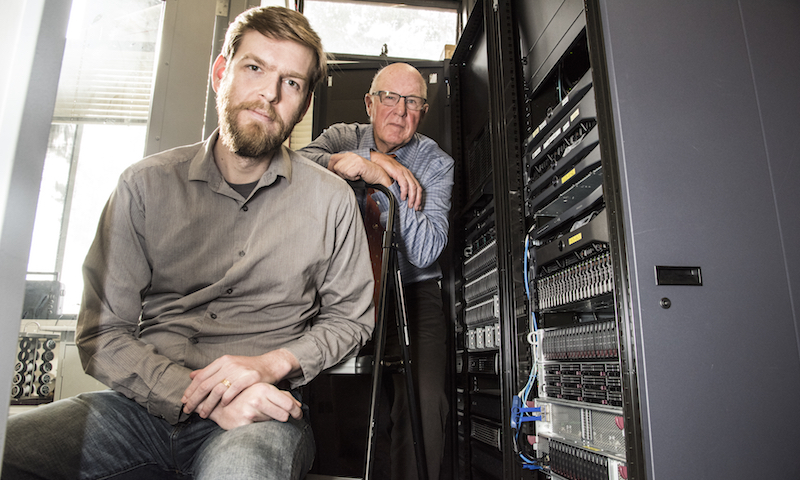 The balloon of cyber warfare has gone up, and the Naval Postgraduate School (NPS) remains at the forefront of developing vital technologies to win the fight in this very gray domain.

“What if we train a neural network to learn what kinds of discourse are associated with radicalization and violence?” asked Warren. “Then, even in a corner of a country that we didn’t know we were supposed to be concerned about, if the discourse shifts – becomes more radicalized, more fearful, or more angry – this neural network could send up a red flag and tell us there’s something happening there.”

The potential applications for this technology are wide-ranging, from global strategic monitoring of hostile activity to vastly improved situational awareness of the human terrain at a tactical level.

The world is engaged in a new era of hybrid conflict, and ANN-ADHIC offers the U.S. military a competitive advantage as opponents increasingly weaponize social media to disrupt discourse and galvanize entire populations towards hostility.

The gravity of such disinformation campaigns hit home beyond Russia’s dedicated effort to sway public opinion during the 2016 presidential election. It has been seen time and time again over the last decade: savvy media campaigns by the Islamic State, Boko Haram’s radicalization efforts in Nigeria, and China’s influence campaigns throughout the world.

Providing operationally-relevant solutions to lean into such challenges is what NPS does best.

In 2014, Information Sciences lecturer Buddy Barreto was chatting in the hallway with a colleague about new ways to use their servers to provide “big data” support to the DA department, when Warren’s research interests came up.

“He said, ‘Hey, you need to go talk to this guy Camber [Warren] because he’s doing some pretty cool stuff and he’s got some data and he doesn’t have any place to put it’,” Barreto recalled. “I did, and the next thing you know we’ve got a new RAM box on this.

“That’s how all relationships start at NPS!” he laughed.

Barreto and Warren immediately set to work on the project which would eventually evolve into ANN-ADHIC. The CODA lab grew from a single server to well over 70 machines of various architectures to handle the copious quantity of data streaming in.

“We realized that we actually had a lot of shared interests and ideas that first day,” Warren said. “We started to realize it wasn’t just about putting some Twitter data on a server; there was potentially so much more that we could do.”

Warren and Barreto fine-tuned this capability over the next four years, analyzing massive incoming data streams through software they developed to sense changing patterns through advanced machine learning architectures - the ‘artificial neural networks’ of ANN-ADHIC.

The data is all open source large media feeds, ranging from Twitter to fan pages on Facebook, online news, and blog sites, meaning it is publicly available and “scrapeable” for key information such as geolocation. ANN-ADHIC observes this data to create a dynamic analysis of changes over time in how people talk with each other, including the subtle differences in new kinds of slang and shifts in discourse.

The sheer volume of data is sourced from virtually every corner of the globe. The profusion of social media has extended even to rural areas in Africa and Asia once assumed to lay beyond the analytic gaze.

“Even if they’re not high-tech smartphones, almost any cell phone can send messages, which means you can tweet,” Warren said. “You have cell phone towers and smartphones even in low developed areas like Yemen, Iraq, and Nigeria, where there’s enough information coming out to get a [statistically viable] sense of the population.”

For a test case, Warren and Barreto applied ANN-ADHIC to successive radicalization campaigns by Boko Haram in northeastern Nigeria targeting the ethnic minority Hausa population. Using initial efforts by the jihadist militant organization as a baseline, the team was able to accurately predict social unrest and violence as the campaign unfolded.

“We were able to show that in social media you could see increasing references to these in-group and out-group names as a result of the polarization that was occurring through this radicalization, and we could map that out over space and time to predict where we’re going to subsequently see violence,” Warren recounted. “These political campaigns necessarily precede the kinetic campaigns: you have to get people ginned up in certain ways to get them fighting the way you want.”

With analytical success looking at Boko Haram, Warren and Barreto aim to generalize this capability to a global reach. What makes ANN-ADHIC so advanced is that it uses artificial neural networks to figure out what statistical correlations to look for in changing linguistic patterns.

That potentially becomes a game-changing way of approaching indications and warnings for all kinds of irregular warfare.

“We want it to be able to tell us, ‘Hey, there’s something weird happening over in this corner of the country; all of a sudden, discourse has shifted,’” Barreto said. “It could be a new group that we have no previous knowledge of that is revealed by the noise.”

Additionally, ANN-ADHIC offers a valuable second-order effect: it can provide metrics to validate the effectiveness of our own information operations. In Afghanistan, for example, much blood and treasure have been poured into providing positive messaging to promote Afghan loyalty and unity.

“Are they working? Are they not? Are they actually turning people against us or towards us? We don’t know,” Warren said. “But with these sorts of tools, we’re aiming to build some of the first systematic measures of effectiveness for these information operations.”

The DI2O funding will enable the CODA lab to move forward from a notional, tested concept to a specific tool put in the hands of operators in the field for testing.

“We’re building fundamentally new science,” Warren said. “We’ve developed new approaches to these computer learning problems which are able to solve these problems better, and once we’ve scientifically demonstrated this in a verifiable way that works, the next round will be to build this up to the next level where we can be producing these things in a way that they can actually be put in the hands of the force en masse.”

Only at NPS would something like this be possible, he continued.

“The school provides a unique combination of cutting-edge scientific expertise and real-world practitioner knowledge, folks coming back from the field who’ve experienced these problems first-hand,” Warren said. “NPS is one of the only places where you can bring those two communities together and build things that are not only cutting-edge data science but operationally relevant.”