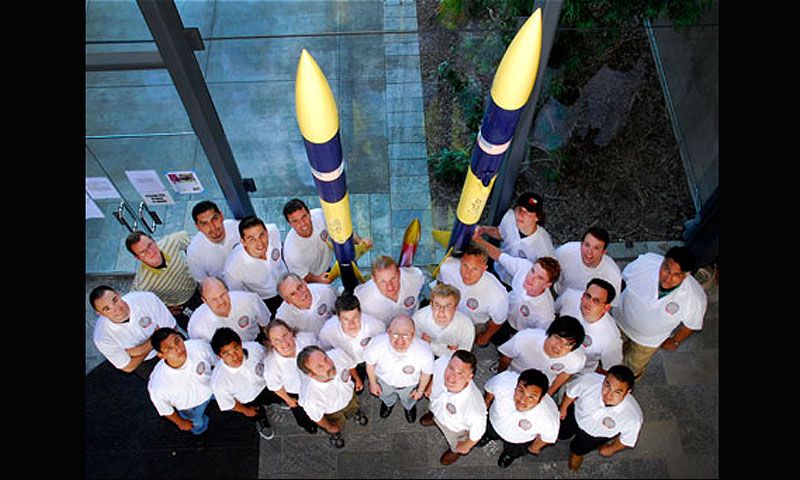 A team of students and faculty from the Naval Postgraduate School (NPS) and Hartnell College participated in the second annual American Institute of Aeronautics and Astronautics (AIAA) Young Professional Rocket Launch Competition at Koehn Lake in the Mohave Desert. With successful launches in the two-day event, the team took top honors in the altitude prediction category for the second time in as many competitions.

“It was a great opportunity to apply what we have learned in the classroom to something real,” said Adam Yingling, a Ph.D. student in the Mechanical and Astronautical Engineering program and one of the co-captains of the team. “It was exciting,” he added.

The section participated with three rockets in total, two 15-foot rockets from NPS named Castor and Pollux, and one 10-foot rocket from Hartnell College called Gemini.

“They were essentially identical looking rockets [Castor and Pollux], which is actually the whole point of the names,” said Lt. Cmdr. Tom Seigenthaler, NPS student in the Electrical Engineering program, and co-captain of the Gemini team. “We named them after the constellation Gemini and the two twin brothers of Gemini, Castor and Pollux.”

The competition was first organized last year by the AIAA Region Six directors to give young professionals the opportunity to test their capabilities, allow for collaboration between them and promote new ideas in the rocket industry. The competition is for young professionals, either right out of college or on the way to earning a master’s degree.

A total of 10 different teams took part in the competition including big names like Boeing and NASA, with the teams working for months to prepare their rockets for the competition. Each team had to build a rocket following the same guidelines of height and weight and to be powered by the same kind of rocket engine. They all were expected to carry a predetermined payload provided by the competition organizers.

“They give us a competition payload that we have to carry. Each one of the rockets has a space built in to it so we can insert the payload that the competition official gives us,” said Seigenthaler. “That payload has to come down and then be inserted into the next rocket to take it up as well.”

In the case of Castor, however, the rocket was uniquely equipped with a video camera and a prototype of the self-guided SNOWFLAKE system under joint development by NPS and the University of Alabama in Huntsville. SNOWFLAKE is a compact, autonomous air delivery system that can be used to deliver small payloads in places where a standard delivery system would not be able.

“This is something unique too,” said Yakimenko, who is also SNOWFLAKE project lead at NPS. “It’s not only unique for our section but for the entire world, because nobody in the world has such an accurate autonomous air delivery system with advanced networking capabilities.”

So unique that NASA showed interest in using SNOWFLAKE to deliver items from the International Space Station, said Yakimenko. “They approached us and they asked for an accuracy of 15 kilometers,” he noted. “I think we can demonstrate to within 10 meters like we did before in Camp Roberts.” 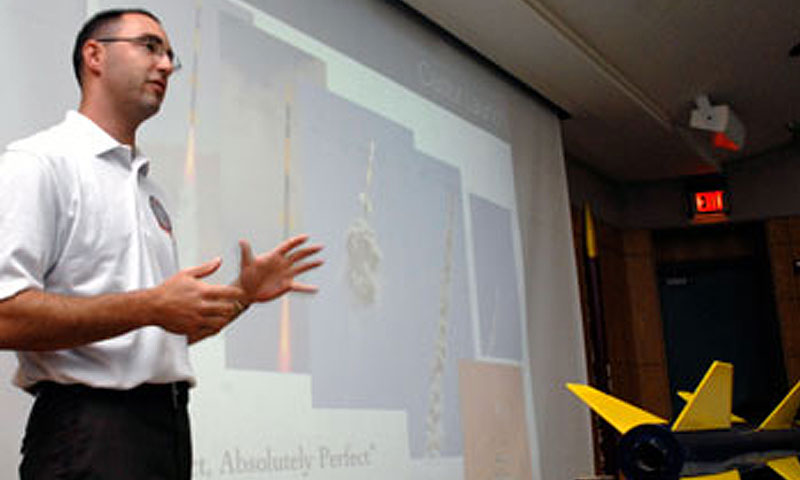 The competition is divided into two categories, maximum altitude and accurate prediction of the rocket’s maximum altitude. This time the NPS team predicted their 42-pound rockets to reach an altitude of 7,600 feet, one of the judging criteria of the two-part competition.

“Last year we took two teams of about 20 people with the small size rocket,” said Yakimenko. “Both rockets had the same payload in them unfortunately one of them ‘disassembled’ in mid air… this is a part of the educational process, in fact out of 8 rockets [in the competition], I think, 4 or 5 disassembled, so we were not the only ones. But one rocket belonging to our Point Lobos section won the competition and you can see it displayed on the first floor on Watkins hall. Now we’ll have Castor on that wall as well.”

This year the competition offered its own challenges and disappointments in addition to the victory. One of the rockets, Pollux, was damaged by a metal rod from the launch pad upon takeoff, causing it to deploy its parachute prematurely and disrupting its flight pattern.

In spite of the finish, the ultimate goal of the competition is experience – months of hard work and preparation for the team, culminating in a long trip to the desert on a Friday afternoon and two days of launching rockets.

There’s a lot of application of meticulous calculations, some very technical aspects, but also a lot of elbow grease and waking up in the middle of the night with ideas, said Seigenthaler.

“They worked late at night; they basically lived here for several months,” said Yakimenko. “As you can see, these guys work on electronics, they work the mechanics and everything, but their major component is inspiration.”

It was a lot of work but it was very enjoyable, added Snowflake lead student Cmdr. Charles Hewgley, an NPS Ph.D. student in the electrical engineering department.

The NPS team represented the Point Lobos Section of region six of the AIAA. “AIAA is a professional society that unites hundreds of thousands of engineers from around the globe,” said NPS Research Professor Oleg Yakimenko, Director of the Aerodynamic Decelerator Systems Center in the Department of Mechanical and Aerospace Engineering; he is also AIAA Point Lobos Section Chair. “AIAA has seven regions and our section belongs to region six that unites Oregon, Washington, Hawaii, Alaska, Arizona, Utah, Idaho, Nevada and California.”

Established in 1967, the Point Lobos section is among the smallest sections in the whole society with less than 100 members comprised of students, active faculty and retirees. The section was inactive for a number of years, according to Yakimenko, until three years ago when it was reactivated with the purpose of propelling young professionals into the field of aerospace engineering, including rocketry, he said.

The team is currently in the planning stages for a possible robot competition to continue the mentoring relationships they have with local schools. For more information, please contact Professor Oleg Yakimenko in the Department of Mechanical and Aerospace Engineering.