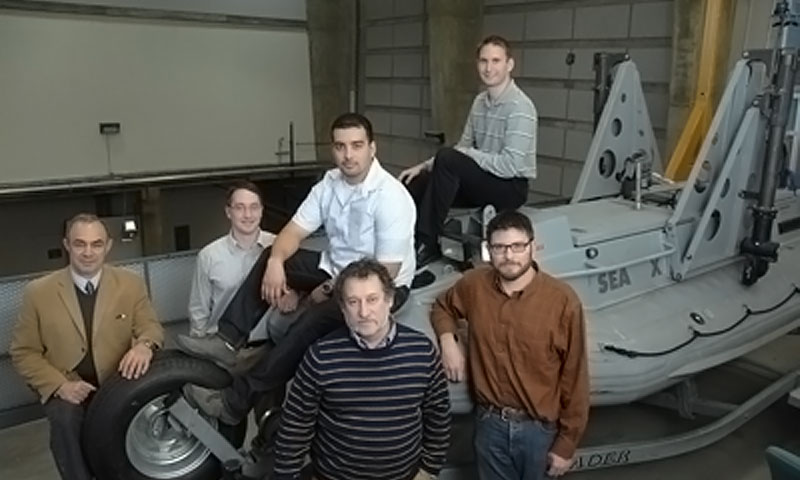 “Historically, MIO experimentation emerged out of earlier collaboration among geographically distributed Special Forces ISR [intelligence, surveillance and reconnaissance] units using cyberspace to track high-value targets,” Bordetsky explained. “In 2004, the first German, Swedish, Greek and Singapore officer students did this for their thesis research here at NPS and then set it up when they returned to their countries.  We wouldn’t have been so successful in developing the international portion of the experimental program if we hadn’t had these student ambassadors. Then in 2005, we joined forces with Lawrence Livermore to develop ad hoc mobile self-organizing mesh networks in support of nuclear threat detection and interdiction for both large and small vessels.”

“The heart of CENETIX’s experimental program is our interdisciplinary faculty-student team,” Bordetsky said.  “We have the whole spectrum of NPS students – from Information Systems, Information Operations, C4I, and Defense Analysis/Special Operations, with which we enjoy a special relationship.”

“The strongest facet of this research is that it brings researchers together with actual operators,” said Research Associate and Ph.D. student Sean Kragelund, who has worked with the group’s first surface robot, the Sea Fox, and was a mock combat swimmer for experiments on both the East Coast and in Greece.  “Their participation adds value to the research results, and the experiments introduce new technology they can learn about and leverage, including unmanned vehicles, biometric identification devices and nuclear detection equipment.”

“What I like best is that we’ve shown how to integrate swimmers and autonomous vehicles into the system so they become network nodes, feeding video to distant experts,” added Mike Clement, also a doctoral student as well as research associate.

“Before, our swimmers were completely separated from the tactical network but now they’re fully integrated as network nodes,” agreed Senior Researcher Eugene Bourakov, formerly Technical Director for the Telecommunications Technology Institute at California State University, Hayward.  “Our goal is for all of our gear to have not just tactical networking reach, but true global reach in near real time.” 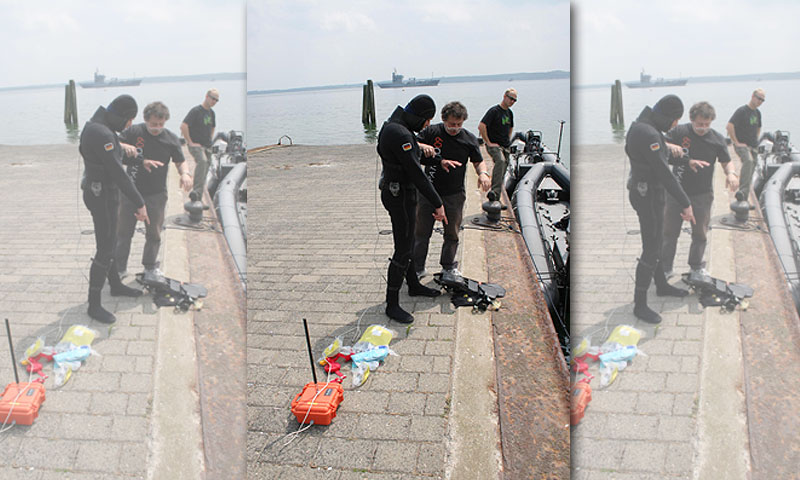 “My first day at work was the day we got the Sea Fox,” said Aurelio Monarrez, Laboratory Manager for the NPS Center for Autonomous Vehicle Research, the autonomous boat’s main operator and payload integrator, and an NPS undergraduate student in computer science.  “It’s a lot of fun and a great opportunity that I really appreciate.  My coursework is directly related to my job, and my work schedule is flexible around my classes, both of which are huge.”

The team’s 2007 to 2009 experiments focused on network-enabled early detection and warning of nuclear related material at multiple overseas locations, tracking to its onloading onto small craft at points of departure, and detecting and interdicting the boats at multiple U.S. entry points.  In fall 2008, the focus moved to a global threat scenario detecting, interdicting and searching for nuclear radiological material hidden in a large cargo ship, carried out jointly with the Port Authority of New York and New Jersey.

In 2010, Bordetsky’s team expanded its experimental program to an even more ambitious range of operational scenarios.

“For the first time, this will enable us to obtain long-term observational data on operational crews’ daily networking and collaborative command and control patterns between and during radiological source detection events,” Bordetsky noted. “This is a bring-your-own-boat, plug-and-play, real-world testbed where we set up virtual private networks [VPNs] in just a few hours.”

“In June 2011. the network will be augmented first with pico [less than 1 kg] satellite-based ad hoc mobile orbital nodes assembled and launched by CENETIX in cooperation with the NPS Space Systems Academic Group’s Cube Satellite team,” he added.  “This will provide a new testbed capability for tracking covertly tagged targets and sharing detection findings via ‘private’ orbital nodes.”

“One of the great things about this research is that you don’t have failures,” Bourakov said.  “If something goes ‘wrong,’ you learn from it and do better the next time.”

In addition to NPS and Lawrence Livermore, participants in the 2010 experimental program were Lockheed Martin’s Center for Innovation, the Army Research Center at Picattiny Arsenal, the University of Bundeswehr in Germany, the Swedish Naval Warfare Center jointly with the Swedish Defense Research Agency, and NATO’s MIO Training Center in Souda Bay.

”The success of this unique project,” Bordetsky stressed, “is due to the talent and dedication of key CENETIX researchers. Eugene Bourakov provides an in invaluable contribution to the project by bringing innovations such as swimmer networking, adaptive antennas, voice control, electronic tags and taking care of the unique MIO testbed infrastructure.  Other key members of the team are faculty members Michael Clement, Marianna Verett, John Looney, Sue Hutchins and Peter Guest; Ph.D. students such as Steve Mullins, Bryan Hudgens and Richard Bergin; partner faculty from a number of NPS departments; and an enthusiastic cohort of NPS master’s thesis students who help in integrating MIO detection and the expert reachback network, design the experimentation tasks, play operational roles in the experiments, conduct data capture, and provide post-experiment analysis.”