NPS Teams Up with NASA, Industry to Test Groundbreaking Maneuvers on Spacecraft in Orbit

null NPS Teams Up with NASA, Industry to Test Groundbreaking Maneuvers on Spacecraft in Orbit

NPS Teams Up with NASA, Industry to Test Groundbreaking Maneuvers on Spacecraft in Orbit 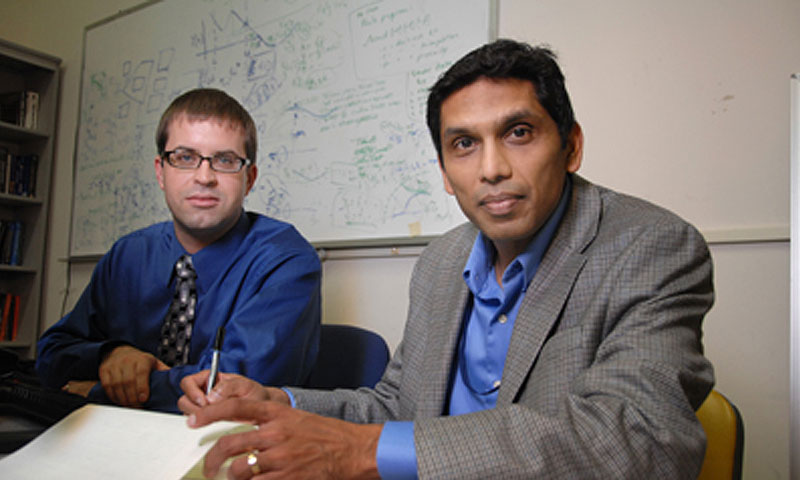 NPS Research Associate Mark Karpenko, left, and Professor Mike Ross, right, teamed up with Draper Laboratory and NASA to test their time-optimal control maneuvers on the to-be-decommissioned TRACE spacecraft. The team ran a series of tests over four weeks that demonstrated their highly efficient maneuvers for slewing a spacecraft in orbit.

Dazzling sun spots and stunning solar flares were just another day in the life of the Transitional Regional and Coronal Explorer (TRACE) spacecraft for the past 12 years. Designed to record solar activity, TRACE captured images and data to transmit back to NASA until earlier this year when it was set to be shut down and replaced by a newer, more efficient craft.

Before shutting down a healthy spacecraft, though, NASA decided to give a team of scientists a shot at conducting their experiments on the fully operational vehicle in space. Handing over the keys to a multi-million dollar piece of equipment is not something that NASA takes lightly, and is no doubt, the opportunity of a lifetime for any scientist or engineer. That opportunity made its way to NPS when Professor Mike Ross and Researcher Mark Karpenko received a call, and an offer to man the spacecraft for four weeks of experiments that could transform industry standards.

“When do you ever get a chance to fly something on a satellite?” said Nazareth Bedrossian, Manned Space Systems Group Leader at Draper Laboratory. “People like us who work in engineering usually don’t get the chance to fly real things.”

TRACE quickly went from being a quiet solar observation satellite to a slewing craft dancing in the sky. NPS joined forces with Draper Laboratory and NASA’s Goddard Space Flight Center to give new life to the craft, and push the limits of what TRACE was designed to do. They hoped to prove their groundbreaking ideas – an alternative method for reorienting spacecrafts using maneuvers that reduce both time and fuel consumption.

“The right people were excited about the kinds of work we had been doing, and they thought it was a great opportunity to give us the keys to a spacecraft to see what we could do,” said Karpenko. “Although the intent of TRACE was not to do these kinds of maneuvers, we were able to figure out how to make the spacecraft execute our ideas, and really show how they work.”

The idea for the TRACE experiments was a joint effort that Ross and Bedrossian had believed in for many years. TRACE was their chance to relive the successes they had seen when utilizing Zero Propellant Maneuvers (ZPM) on the International Space Station (ISS) in 2006. Bedrossian used his ZPM concept, and the support of DIDO software developed by Ross to execute the ISS maneuvers, which proved successful when, as the name implies, they were executed without using a single drop of propellant. Because of Bedrossian’s experience in designing the ISS maneuvers, Ross and Karpenko knew that his involvement would be key to the success of the experiments on TRACE. This time, however, their objective would be to save time, not fuel. 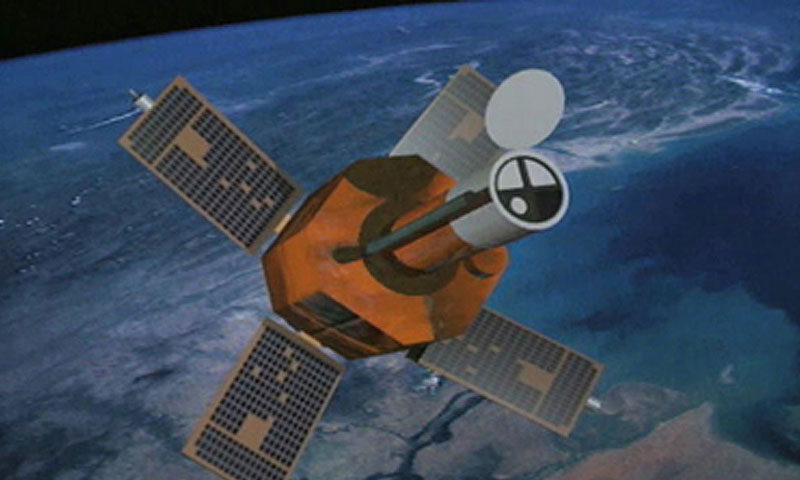 The Transitional Regional and Coronal Explorer (TRACE) spacecraft spent 12 years in orbit, recording solar activity data before being handed over to NPS Professor Mike Ross and Researcher Mark Karpenko for a series of optimal control experiments. The experiments ran over a series of four weeks and were a joint effort with NASA and Draper Laboratory.

“In doing these experiments, they determined that they could use less energy and therefore [less] power,” said NASA Mission Director, Osvaldo Cuevas. “They also found that they could do it in a shorter amount of time. The maneuvers they are proposing are more efficient.”

The team hoped to perform a series of slew maneuvers that would reorient the spacecraft by taking advantage of the physics of the craft as it orbits. The craft would appear to be “dancing” around before ultimately zeroing in on its end point. This winding path would, according to their theory, allow the craft to slew more quickly than if it was maneuvered along a straight path.

“It was a very tense time for NASA because in its entire history, the vehicle had only slewed once, to 15 degrees,” said Karpenko. “These were completely unprecedented maneuvers for the vehicle.”

This concept of the shortest path not necessarily being the fastest has been around for centuries, originally proposed by Swiss mathematician Johann Bernoulli in the 1700s. Through their research, however, the NPS and Draper team developed the means to utilize the same principle in space. TRACE then gave them the platform to demonstrate their new ideas to the greater scientific community.

“Until this opportunity came up, we hadn’t even thought about doing these experiments on a reaction wheel spacecraft like TRACE,” said Karpenko. “We had been focusing our efforts on other kinds of actuation systems like control moment gyros. So getting to the point of a successful flight test by the beginning of August was a real challenge.”

Preparing for the experiments was an exhausting process for the team, all operating from different locations around the country. Bedrossian and his associate, Sagar Bhatt worked on developing the trajectories for the spacecraft, a monumental feat given the time crunch they were working under. Back at NPS, Ross and Karpenko were busy ironing out other details of the experiments, refining the trajectories and developing a series of simulation models to test the maneuvers in order to determine what potential problems might arise once they were operating the real spacecraft.

“Part of the difficulty of getting the spacecraft is it is already in orbit, and we have to really understand how it works in order to figure out whether or not we can do what we are proposing with that architecture,” explained Ross. “Because TRACE was not designed to do anything like this. So we had to kind of turn back the clock 10 years and start picking peoples’ brains about how to make this work.”

All of their hard work paid off on August 10, when Ross, Karpenko, and several others from NASA all gathered at Goddard Space Flight Center in Maryland to execute the first test maneuver. The four week testing period included two tests a day, three days a week, during which the optimal maneuver commands were transmitted to the satellite, and then executed. 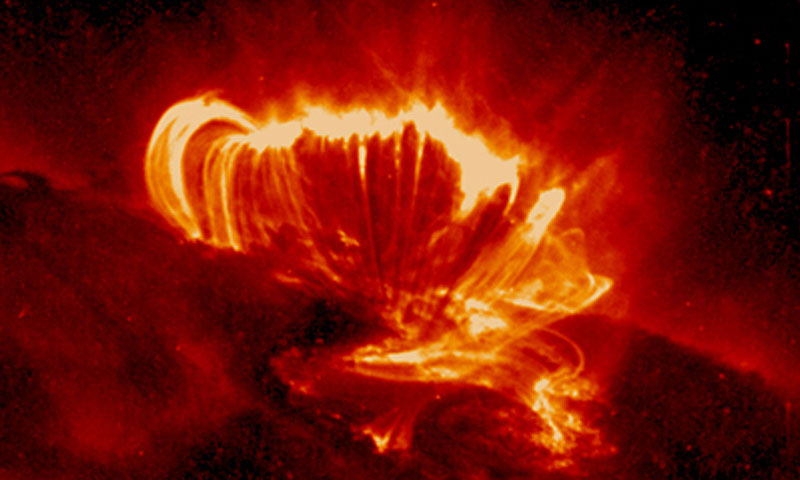 Solar flares were just some of the activity recorded by the TRACE spacecraft before it was slated to be decommissioned earlier this year. NPS teamed up with NASA and Draper Laboratory to use the craft as a test bed for a series of optimal slew maneuvers.

“We wanted to start off small and move the vehicle only by about 10 degrees to make sure that things were working correctly,” said Karpenko. “After our success on the first day, we decided to go for it and do our big test the next day. If we were only going to get one shot at this, this was the test that we really wanted to do.”

That test, a 50 degree slew that took the spacecraft off of the sun line, and then back negative 50 degrees, proved to be a success. The tests that followed would slew the spacecraft up to 90 degrees off the sun line before returning back again to its starting point. Given the success of the experiments, there is hope of future opportunities to demonstrate the optimal control maneuvers on other satellites in orbit.

From an industry perspective, the maneuvers could improve the capabilities of satellites tasked with gathering information quickly. Maneuvering satellites in a way that best utilizes the physics of the spacecraft would allow imaging telescopes to capture images more quickly. In terms of military applications, Bedrossian noted, maneuvers like those performed on the TRACE spacecraft can prove invaluable for timely information gathering. Satellites are key to communications and information for the U.S. military, and are instrumental in gaining access to restricted territory. Quicker maneuvers could mean more information gathered in a shorter period of time.

“A single second could make a huge difference in terms of seeing something in time and responding to it, or being too late,” explained Bedrossian. “The maneuver potentially enhances national security because it essentially improves the agility of your existing assets without touching the flight software. It’s simply a matter of uploading commands.”

While the team is still reveling in the success of the TRACE experiments, they haven’t lost sight of the long-term goals. Given more opportunities to test on different types of spacecrafts, Karpenko expects their maneuvers will continue to yield positive results. Depending on the spacecraft characteristics, the team estimates that their maneuvers can yield performance improvements of up to 70 percent. Whether for NASA or the Department of Defense, their groundbreaking maneuvers have the potential to change the standard on how satellites are reoriented in orbit.

“The interesting thing about working with TRACE is that if you look at the physics of that particular spacecraft, it’s not the best configuration to show that we can save a lot of time,” said Karpenko. “But if we marry the ideas we demonstrated on TRACE with the correct spacecraft configuration, then we can see real savings. We will be able to exploit the available control efforts, together with unique configurations in order to really blow the doors off of what can currently be done using industry standard maneuvers.”