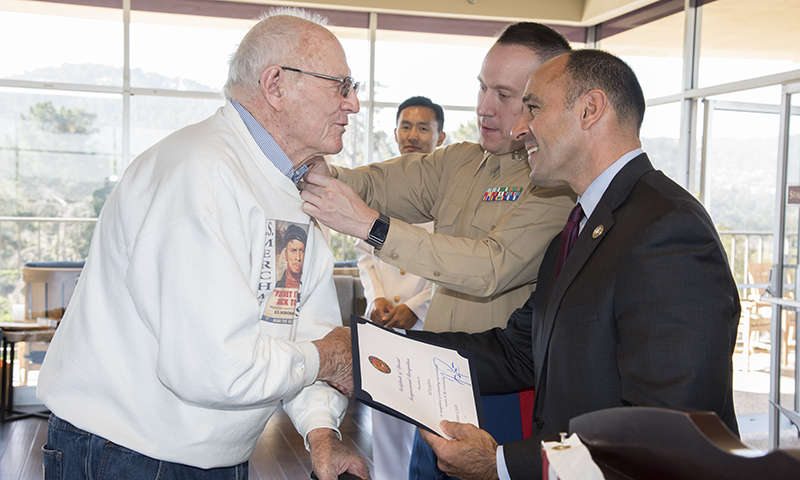 NPS student volunteers joined several informal ceremonies of varied sizes over the weekend to recognize Monterey County Veterans who set the standard in service before them.

On Friday, Nov. 9, at The Park Lane senior living facility in Monterey, local Congressman Jimmy Panetta joined leadership from the Visiting Nurses Association (VNA) and Hospice in formally recognizing 25 veterans in residence at the center ... One of nine separate ceremonies attended by NPS student volunteers across the Monterey Peninsula and into the Salinas Valley.

“I want to thank the Visiting Nurses Association and Hospice and these officers from the Naval Postgraduate School for [participating] in this wonderful ceremony in which we recognize, honor and we appreciate those who served us,” said Panetta. “I believe that is what our community and country is about – ensuring that we continue to serve those who served us. That is why we’re here today, and that is why we are going to honor our Veterans on Sunday.

“It’s because we understand that in this democracy of we the people, it is left up to we the people to ensure the security and the safety of our great nation,” he continued. “But it’s also left up to a few men and women who are willing to sign up, to step up, and for some to give up, everything, in order to serve the great nation of this United States of America.”

For Ed Laughton, now 97, Veterans Day is another opportunity for him to share his treasured scrapbook filled with accounts from the war in the Pacific where he served as Second Mate aboard the munitions supply ship SS Hobbs Victory.

“I served from 1943 to 1945 on Hobbs Victory in the Pacific campaigns,” Laughton recalled. He recounted how, on April 6, 1945, kamikaze planes from Okinawa struck his ship, killing 13 seaman and wounding more. The ship was eventually lost along with another supply ship during the massive assault on Okinawa, he said.

“It was a tremendous opportunity for us to give thanks to those Veterans that changed the global landscape and paved the way for our service today,” Couchman said. “It was a touching ceremony that really gave us all a chance to reflect on the large and small sacrifices that service requires. You could feel the excitement in the room and see the excited gleam of younger servicemen shining through in the eyes of the Veterans we spoke with.”

Couchman noted that he met a 100-year-old Veteran who survived the Bataan Death March of 1942, and even talked with a retiree who developed technologies used in modern torpedoes.