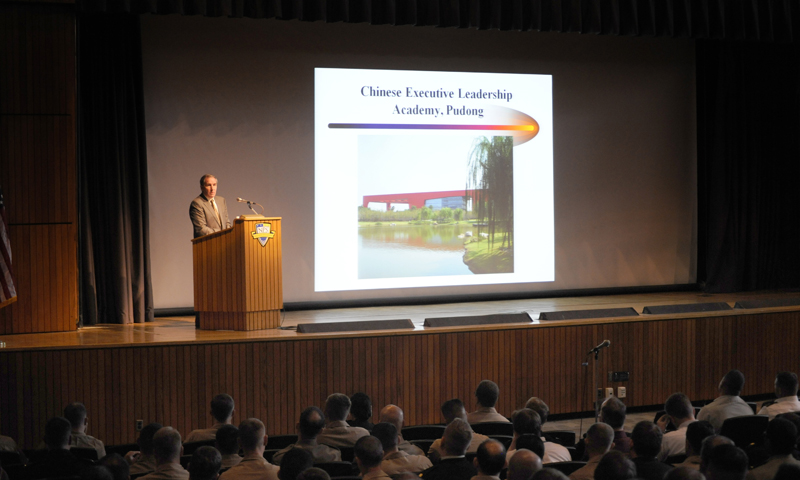 NPS alumnus Dr. Fenton Carey offers a Secretary of the Navy Guest Lecture, May 15. Carey spoke about what he sees as opportunities for the United States and China to have a more collaborative relationship, particularly in fields such as space exploration, health care, and education.

On May 15, Naval Postgraduate School students, faculty and staff welcomed aeronautical engineering alumnus Dr. Fenton Carey, a retired naval officer, for a Secretary of the Navy Guest Lecture entitled “China and the United States: Time to Learn from Each Other and Work Together.” Carey is a 1976 Ph.D. graduate of NPS, and serves as a consultant, most recently on an initiative to create a joint China-United States leadership program. During the SGL, Carey focused his comments on what lessons he believes the United States can learn from China.

“China is a convenient threat, especially when military budgets are under pressure. I hope today I can give you a slightly different perspective on China and a new approach with it,” said Carey. “If you remember only one thing from my presentation, I hope it is the need for the United States to start thinking, acting, and governing strategically, and we need to find new ways to cooperate and compete with China, not contain or confront them.”

Carey explained that a month-long family trip to China in 2008 changed his way of thinking about the U.S. and China relationship, noting that he felt “the Chinese people were interested in the same things that Americans want for their families and country – peace, freedom and opportunity.”

He now regularly lectures about what he sees as opportunities for the United States to collaborate with and learn from the country that has, for so long, been viewed as a threat.

“I’m proud to be an American. I have served her in senior executive positions in the government and the military for over 30 years, but my vacation [to China] gave me cause to reflect on who we are, where we are going,” explained Carey, “and how we are going to get there. In short, I believe that we have lost sight of who we are and where we are going, let alone working together to achieve the American dream.”

Carey noted that he understands the long-standing hesitation to collaborate with the communist country, but that there are areas in which both countries have common interest and could learn from each other. He explained that such fields include energy, space exploration, transportation and health care. He pointed to China’s successful national highway system, which looks much like our Interstate Highway System, as an example of the great achievements of the country with well over a billion citizens.

“Since the end of the Cold War, the world has changed. New technologies have emerged, environmental concerns have grown, and new threats, both physical and cyber, have materialized,” Carey explained. “The world has moved more and more from a physically connected world to a digitally connected one – a world in which anyone can communicate with anyone else anywhere in the world at any time. Basically we have become more interdependent.

“The United States and China certainly have areas of disagreement. But, we also have common interests such as energy, space, transportation, medical care and education,” he continued. “We need to work together on these issues for the common benefit of humanity and our countries. We need a new paradigm of competition and cooperation with China, not containment and confrontation. And we need to demonstrate to the world that it can work.”

Drawing on examples of what he saw as China’s strengths, Carey proposed three steps to further collaboration between the two countries. “First, I am suggesting we seek first to understand China and then to be understood. Second, we need to open a quiet and constructive dialogue on issues of common interest and concern,” Carey said. “Finally, we need to pick one or two initiatives and demonstrate to the world that we can work together to achieve success. If we do, I believe the rest of the world will follow. Today I am suggesting that we adopt a new strategy with China and by extension the world.”

He suggested that the United States should develop a bi-partisan commission of former government, industry, and university leaders to develop and support a national vision and grand strategy that would help guide our relations with China, suggesting that political and media antics may be overshadowing better relations.

Carey pointed to China’s stance on education as a valuable part of their identity, and one that the U.S. could benefit from developing. “We need to create the opportunities for our current and future leaders, much like the NPS does for our services, to learn about global leadership and innovation,” he said. “We need to prepare our future leaders in all academic disciplines and professions to work together to foster innovation and cooperation regardless of where they ultimately work.” He pointed to NPS as a good example of how to prepare our future leaders to do this.

He ended by challenging the audience to consider two possible visions for the United States to pursue with China – Cold War II or Allies.

“During World War II, Germany, Italy, and Japan were our enemies,” Carey explained. “Today, they are our allies. During that same period, the United States and Allies were helping Free China fight the Japanese. Today, we have a choice with China. We can either work with it to make it an ally or make them a real threat. For us and our future generations, I find the latter unacceptable. We must remain vigilant with China, but we should also be visionary.

“But, becoming allies will not happen on its own; it will require a concerted, constructive, and sustained effort by the leaders of both nations – the two economic superpowers of the 21st Century. Now is the time to start.”