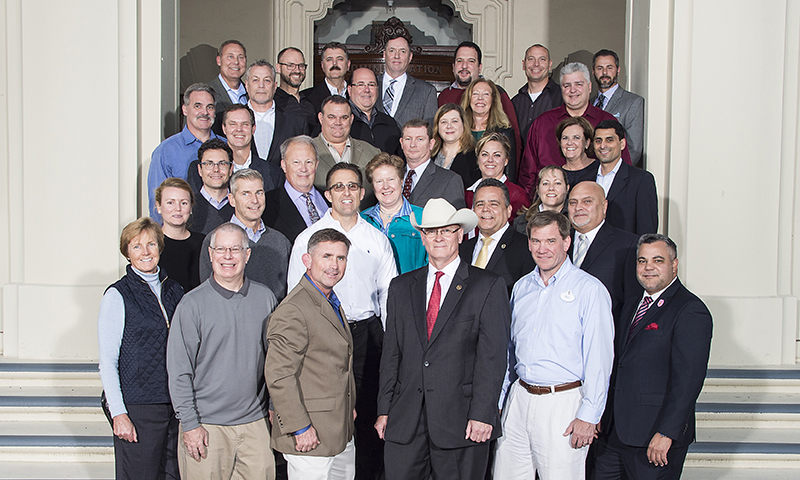 Texas Ranger Maj. J.D. Robertson, the first ever Texas Ranger to walk the halls of NPS, looks the part of the unyielding, ‘Lone Star’ lawman. His stature is straight and tall; his eyes are fixed, steel blue. His well-proportioned frame is topped off just how one would think it would be, with an impeccable cattleman’s, fur felt hat – not a cowboy hat.

Robertson is one of 34 law enforcement and government officials who just completed the nine-month Executive Leaders Program (ELP) in the Naval Postgraduate School’s (NPS) Center for Homeland Defense and Security (CHDS).

“The Naval Postgraduate School and the Center for Homeland Defense and Security are institutions with a long and legendary history of providing excellent, executive-level education. There are multiple asymmetrical threats facing homeland security leaders today in a wide variety of areas, including but not limited to terrorism, cyber security, critical infrastructure and natural disasters,” said Robertson.

Robertson heads the Special Operations Group out of Austin, Texas, where he is responsible for a host of expert teams in special weapons and tactics, bomb squad, reconnaissance, special response, crisis negotiations, and border security. He’s the one they call on when things get critical … for the entire state of Texas. So what can this seasoned enforcer learn in the classroom that he doesn’t already know from the hard scrabble of 26 years on the streets and frontier?

“The CHDS-ELP program brings together leaders from the many multidisciplinary fields in homeland security with the premise of providing advanced discussion on critical threat topics presented by leading experts,” he said. “In this environment, leaders gain different perspectives in dealing with these threats in a collaborative problem-solving atmosphere, which builds trust and respect for the various perspectives in dealing with these challenges.”

Robertson’s career has encompassed a wide range of duties, including serving as an officer of the Texas Highway Patrol and the Texas Department of Public Safety. But his calling for taking on greater responsibilities was strong over the last decade, with opportunities that have put him in the forefront of the state’s incredibly burgeoning drug and human trafficking problems.

“In 2006, Transnational Criminal Organizations began to exploit vulnerabilities in the Texas border region, capitalizing on the diverse terrain of Texas in smuggling ton-quantities of drugs and human cargo across the border,” said Robertson.

“I was fortunate to be selected to a special unit created to operate in areas where conventional law enforcement could not effectively deal with transnational criminal groups,” he added. “Over time, that position allowed me to develop a set of skills in dealing with issues related to critical incidents and border security related issues.”

In 2010, Robertson assumed command of the Department of Public Safety’s Special Weapons and Tactics team, which further developed his skills in dealing with critical incident management and resolution.

With the growing escalation in illegal drug trafficking, human smuggling and escalation of violence in the Texas Border region, the Department of Public Safety director combined the special tactical operations units under a single commander in October of 2011 to address these threats in a task force initiative.

“At the time of the formation of the Special Operations Group, I was again fortunate to have developed and honed the skills needed to lead this diverse and highly specialized group of units in a combined effort to provide a unique and specialized application of tactical law enforcement to a growing problem,” explained Robertson.

Over the course of the past nine months, Robertson’s own tactical experience and savvy has served as a contribution to the ELP’s participants, an aggregate of the nation’s local, tribal, state, federal government, and private sector homeland security officials. Robertson has the highest regard for his colleagues and considers them as equals. However, it’s his special law enforcement pedigree that sets him apart, so much so that he’s been invited to lecture in the CHDS program.

“Having engaged extensively in a collaborative environment and various social settings through the course of study, I have learned the members of the cohort have the highest level of integrity and character you would expect of executive leaders. The quality of personnel, as well as instructors, has exceeded my expectations in many ways.  I have also developed professional and personal relationships that will benefit collaborative information sharing on homeland security issues for years to come,” said Robertson.

The CHDS Executive Leaders Program is a nine-month curriculum consisting of four one-week in residence modules each focused on unique aspects of homeland security and its threats from an executive leadership perspective. For more information about the program, visit the CHDS ELP website.