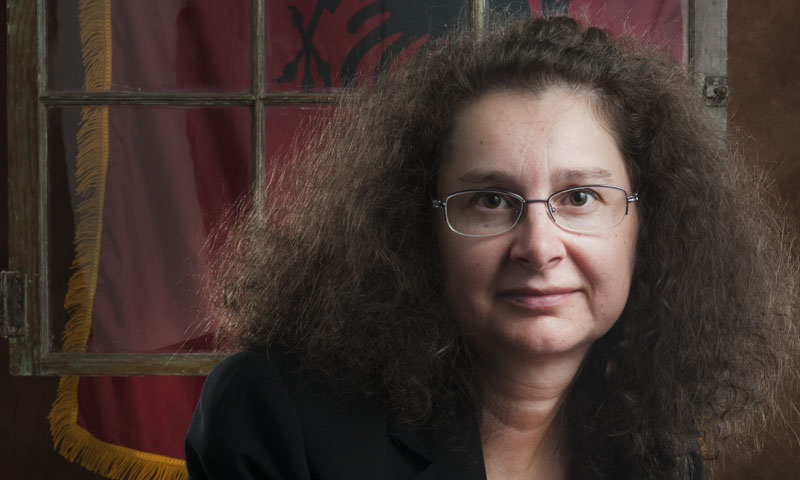 Naval Postgraduate School (NPS) Center for Civil-Military Relations (CCMR) Intelligence and Democracy Program Manager Cristiana Matei is pictured in front of an Albanian flag, May 27. Matei worked with the Office of Defense Cooperation at the U.S. Embassy in Tirana to develop an intelligence and democracy workshop designed to support Albania in its ongoing transition toward democracy.

Naval Postgraduate School (NPS) faculty from the Center for Civil-Military Relations (CCMR) recently led a four-day Intelligence and Democracy Workshop in Tirana, Albania attended by the Albanian Minister of Defense, the Chief of the Albanian Armed Forces, the U.S. Ambassador to Albania and both members of the Albanian Parliament and the heads of Albania’s Intelligence Services, April 28 – May 2.

Wirtz, Jasper and Matei worked with the Office of Defense Cooperation at the U.S. Embassy in Tirana to develop a series of courses aimed at supporting Albania in its ongoing democratic transition. Matei applied her expertise in strategic intelligence, intelligence democratization, and strategic communications to the workshop.

“We sought to provide Albanian military and civilian leaders with an understanding of the opportunities and the challenges that come with developing an intelligence system that is transparent in a democratic society,” said Matei.

Matei and her colleagues at the CCMR were invited to Albania to hold the Intel and Democracy Workshop throughout the Naval Education and Training Security Assistance Field Activity (NETSAFA).

“Albanian parliamentarians requested meetings between us, themselves, the police and the military,” said Matei.

Jasper noted that the emerging filed of cybersecurity is one of the areas where Albanian officials are interested in drawing from U.S. lessons learned. They are looking at the various roles and responsibilities of their intelligence agencies and the government officials tasked with providing them with public oversight.

“As a new democracy and NATO member, Albanian intel agencies and military were interested in learning about the challenges associated with global security trends in general, and cyberspace in particular, that the U.S. and NATO are facing,” said Jasper.

According to Matei, the workshop represented an important milestone in Albania’s transition from an authoritarian past toward a more open and democratic future.

“This was the first-ever seminar in intelligence and democracy held in Albania. It brought together practitioners from civilian and military intelligence agencies, law enforcement professionals, representatives from the Inspector General’s office, Executive Branch officials and members of the parliament for the first time,” said Matei.

“We are providing them with insights and information gleaned from other nations who have gone through similar transitions toward democracy,” Matei continued.

Despite his vast expertise in strategic intelligence, reform, oversight and decision-making, Wirtz was taken back by what he saw at the workshop.

“They placed Parliamentarians and intelligence officials in the same room to talk about oversight face to face, it was something that you would rarely witness here in the U.S.,” said Wirtz.

“To actually see elected officials confront senior police and intel service officers was really something to watch. I have encountered similar exchanges in a panel like setting, but I have never encountered a face to face exchange like that,” continued Wirtz.

U.S. Ambassador to Albania Alexander Arvizu also commented on the face-to-face discussions and the positive role that such debates have in a democratic society.

“Politics are a part of life and there are going to be differences, but it is possible to have very spirited discussions and strong differences of opinion and still retain the integrity of the parliament as an institution and to maintain the confidence of the people toward the government,” said Arvizu. “But it is only possible to do all of that, if we act in a way that is characterized by integrity. ”

Workshop participants debated hot-button topics like the role of intelligence in a democracy, the legal framework necessary to provide oversight of operations within a democratic state as well as cyber security and strategic communications. These topics were particularly timely in light of current legislation being written within the Albanian parliament.

“They are currently trying to write laws governing how intelligence will be managed in Albania and revising their legal framework for intelligence,” said Matei. “The seminar as well as the topics presented were of great relevance and received with high interest by the audience.”

Although Albania is a transitioning state, workshop participants appeared to have a sound understanding of the road that they must take in order to transform their homeland into a more democratic society.

“They were a very sophisticated group of people, they were aware of the theories and concepts involved and engaged immediately with the subject matter,” said Wirtz.

Matei observed that many of the problems that Albania is seeking to overcome are familiar to traditionally democratic states.

“We discovered that, as in our own society, interagency cooperation was a major problem,” said Matei.

Also noted was a need for a long-term strategic communications plan and education – challenges that Matei and her colleagues are already looking forward to addressing.

“We are interested in conducting a three-day strategic communications workshop. They have acknowledged that ‘nothing comes from the sky’ and that you don't get the support of the people without talking to them,” said Matei. “We would like to help them to have that conversation.”