NPS Workshop Launches a Continuum of Education, Analysis on the Navy’s Most Challenging Issues

null NPS Workshop Launches a Continuum of Education, Analysis on the Navy’s Most Challenging Issues

NPS Workshop Launches a Continuum of Education, Analysis on the Navy’s Most Challenging Issues 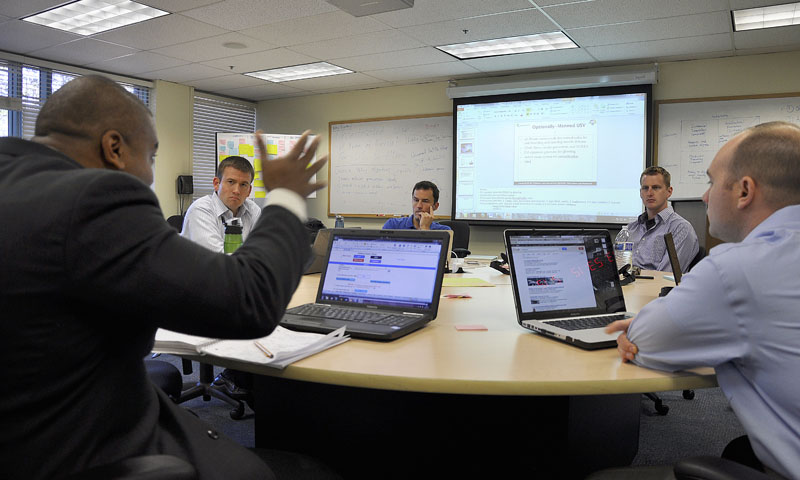 Students at the Naval Postgraduate School (NPS) recently participated in a warfare innovation workshop designed to challenge students to analyze a series of scenarios wherein U.S. forces are drawn into a conflict in the South China Sea.

The university’s warfare innovation workshops, led by the Consortium for Robotics and Unmanned Systems Education and Research (CRUSER), explore advanced problems as directed by naval commands and researchers at NPS. The most recent workshop directly supported the efforts of the Navy Warfare Development Command and the Office of Chief of Naval Operations (OPNAV) as these organizations strive to envision future conflicts and the Navy’s response to them in support of U.S. national security.

“The warfare innovation workshop is actually a series of workshops that occur about once every six months, allowing our faculty and sponsors to leverage the operational experience of our students,” said NPS Department of Operations Research Professor of Practice, retired Navy Capt. Jeff Kline.

Workshop attendees sought to answer questions posed in recent years by Navy leadership regarding the manner in which the sea service should respond to emerging technologies that may potentially limit the abilities of naval forces to either communicate or navigate.

Also sought was the answer to questions about the Navy’s ability to mitigate the targeting risk posed by large vessels like aircraft carriers that, due to their size and capabilities, are high-value enemy targets. Students explored small flotillas of manned and unmanned systems that can operate in a manner, and with the capabilities associated with, larger fleets or air wings under a concept known as the Distributed Air Wing and Surface Capabilities.

“We challenged our students to explore advanced concepts that will allow the U.S. and its allies to operate under the Anti-Access Area Denial (A2AD) umbrella on and over the sea, in an emission-controlled environment, by using the distributed air wing capabilities concept and flotillas with small missile-equipped ships,” said Kline.

“The concepts are a response to robust A2AD development efforts underway in countries like China and Iran who have developed asymmetric responses to counter our ability to operate freely throughout the world’s oceans,” continued Kline. “These nations are using small boat swarms, missile boats, and mini-submarines. We are thinking about how we can augment our capabilities to counter these tactics.”

The scenario in which students explored these counter tactics involved a notional escalation of force between the navies of the People’s Republic of China (PRC), Indonesia, the Philippines and the Socialist Republic of Vietnam.  In the scenario, Chinese attempts to lay claim to resources beneath the South China Sea led to increasing international tensions and finally to all out warfare between Western governments allied with Indonesia, the Philippines and Vietnam against the PRC.

In the envisioned scenario, allied forces must operate in an environment that limits traditional intelligence and navigation systems – known as an emissions-controlled environment. Faced with the prospect of limited intelligence and navigation systems, students were forced to think outside the box and consider both currently obsolete and future technologies to overcome these challenges.

U.S. Navy Lts. John Goff and James Efird approached this problem by looking at the deployment of littoral vessels and other small naval craft as part of a dispersed flotilla concept.

“Larger ships like carriers and destroyers are easily identifiable and easily targeted. We felt the need to look at smaller ships that are more difficult to deny [to strategic areas],” said Goff. “If you are able to disperse the power of a destroyer over 10 small ships, you make it less targetable.

“The loss of a destroyer takes out 280 people and all of its capabilities, but by using smaller vessels you take your eggs out of one basket. We are also looking at the possibility of using small remotely-controlled vessels. I see the flotilla concept as a potentially big win,” continued Goff.

Efird insists that the questions being asked at the workshop are a necessary step in the evolution of modern warfare.

“We are at a fork in the road,” said Efird, a naval helicopter pilot by trade. “We have these huge systems from the past, but technology is changing the way we approach warfare. The enemy has adapted to our tactics and we must evolve as well to keep them on their toes.

“Modern weapons have become extremely ferocious and the potential to lose an entire carrier to these weapons forces us to look at how we must change our tactics to adapt to changing technologies and tactics,” continued Efird. “You have to break [the mindsets of the past] if you want to win a future war, you have to change constantly. You can’t fight the last war, it just doesn't work … You have to be willing to change to win.”

U.S. Army Capt. Mohamed Massaquoi collaborated with a team of students to explore the manner in which Unmanned Surface Vessels (USV) and developing communications technologies could be used to minimize risks to personnel and reduce costs in the notional South China Sea conflict.

“A lot of what we discussed was tactics. We looked at how we can fight with what we have now and we looked at platforms and sensor packages that exist right now but are yet to be employed,” said Massaquoi.

Central to Massaquoi’s team’s analysis was the realization that new communications architectures must be developed in conjunction with USV platforms.

“We need to think about ways to communicate that do not use any part of the current electromagnetic spectrum – lasers and ‘bat-signal’ like technologies that allow us to communicate in an emission-controlled environment. We have to come up with something that [our opponents] are not thinking about or that they cannot hack into.”

Massaquoi believes that workshops like these are a necessary step toward maintaining a competitive edge throughout the Department of Defense. He points to rapidly developing Chinese technologies as a sign that the U.S. must continue to innovate and push the envelope of what is possible forward.

“Pretty much everything we are coming up with [the Chinese] are copying and they are having innovations of their own,” said Massaquoi. “We are beginning to realize that they have robust efforts to put these sorts of the weapons out there right now and we must develop tactics and platforms of our own to counter them.”

Kline insists that workshops like these are not just important to the future of the Navy, but that they compliment students’ educational experiences as well.

“It expands their academic and professional development because it exposes them to real-world issues that we are dealing with in the Navy,” said Kline. “In most cases, the students love it. The opportunity as a junior officer to influence the Navy’s concepts or force structure really excites them, especially when they can see that what they are seeing and studying has a real relevant impact.”

But the innovation workshop does not end when the participants deliver their closing briefings and analyses to Navy commands and sponsors. Rather, it is the first step in a process that continues to pit students, academics and engineers against some of the Navy’s most difficult challenges.

“We have buy-in from the faculty to tie these concepts to some of their classes and the thesis work that will be done to develop these concepts. It is a perfect marriage of both education and research when it comes to a real applied problem,” said Kline. “There are going to be five different classes that will be working on different aspects of this topic throughout the year.”