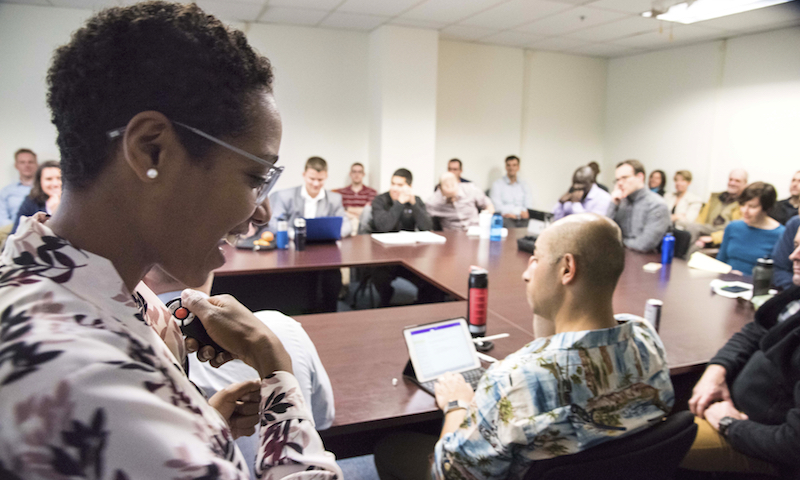 Students at the Naval Postgraduate School (NPS) were recently challenged to rethink the internal dynamics of authoritarian regimes.

Engaging a packed lecture room in Glasgow Hall on the university campus, Feb. 22, guest speaker Dr. Mai Hassan, Assistant Professor of Political Science at the University of Michigan, reviewed her recent research into how Kenyan autocrats manipulate the state to win elections – and hold on to power.

“The common assumption is that these states are weak and can’t see what’s happening in their rural areas outside of the capital city,” Hassan said. “Existing literature says what you do is simply pack the state with loyal officers.”

Her research, however, tells a different story.

Drawing on Kenyan archival records of approximately 20,000 officer posts between 1963 and 2012, and over 100 in-depth interviews with regime elites and state officials, Hassan demonstrated that the make-up of the bureaucracy and internal security forces is actually quite diverse.

“What I found really interesting in my data is that the largest [political] rival comprised ten percent of the security apparatus, exactly what ‘packing’ would say would never happen,” Hassan said. “Empirically, most of these states are not actually ‘packed’; their bureaucracies are often quite diverse and representative of the country’s heterogeneity.”

Hassan believes this to be deliberate, she says. By carefully co-opting and rotating officers throughout the country from a multitude of ethnic groups, a leader is best able to mitigate threats, both popular and from the elite class.

“The bottom line is the leader can’t guarantee full compliance, but this compliance isn’t fully necessary across the country,” Hassan explained.

Popular threats – protests, insurgency or opposition strongholds – are also not equally likely to occur throughout the country.

“The leader’s going to strategically shuffle officers so that areas with a popular threat are governed by bureaucrats that are willing and best able to temper that threat,” she said.

The relevance of Hassan’s research extends beyond Kenya. A nuanced view of this bureaucracy is key to understanding how autocratic leaders persist despite the introduction of multi-party elections and democratization.

“This type of executive bureaucracy exists in a whole host of other countries: many African countries, many Middle Eastern countries, China, India, the former Ottoman Empire, Persia and Russia,” Hassan said.

Upon concluding her presentation, Hassan immediately fielded questions from NPS students and faculty.

Dialogue ranged from whether international calls for democratization have a reverse effect; the impact of U.S. security assistance on this process; and, the legacy of colonization.

For Maj. Anthony Bowman, a graduate student in NPS’ Department of National Security Affairs, the event was as stimulating as it was relevant.

As an Air Force officer on track to becoming a Foreign Area Officer in Sub-Saharan Africa, Bowman has a deep interest in the political dynamics of the region.

“It definitely provided some useful insights on looking for ways we can improve the aid we provide these countries,” he said. “Obviously, our long-term goal is not to enable predatory regimes, it’s to increase security.”

Hassan’s presentation was the latest of the Global Connections Speaker Series held by NPS’ Department of National Security Affairs and funded by the NPS Foundation.

Since 2015, the monthly series has sought to engage students and faculty in meaningful conversations with experts in international relations to gain insight into the latest research and developments in the field and, most importantly, to provide NPS students with relevant knowledge to complement their studies and future careers.