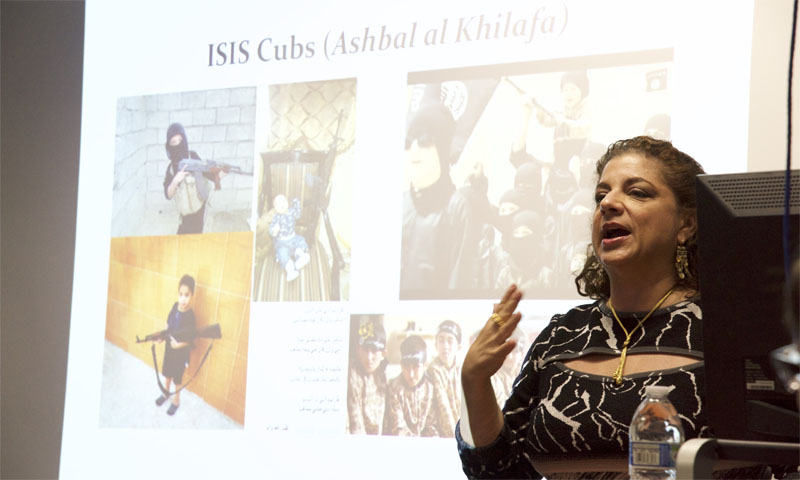 Georgia State University Professor Mia Bloom lectures on the use of youth in terrorism during the latest Global Connections seminar, March 5.

From lethal suicide bombings to savvy propaganda, the Islamic State continues to use children from around the world to wage war.

“One of the things we found was that the children were being used for a variety of roles that were not traditional, in very adult kinds of roles,” she said.

Bloom was able to determine the national origin and geolocation for hundreds of children in order to trace the arc of exactly how they have been employed in Syria and Iraq.

“We started to see certain phenomena with the foreign fighter children ... Western children were very often being used in propaganda not once, not twice, but over and over again,” she said.

ISIS deliberately selected racially and ethnically-diverse children to highlight the internationalization of the caliphate. This allowed ISIS to have the greatest appeal to potential recruits abroad, who were encouraged to bring their families.

“This was perhaps one of the most interesting findings,” Bloom said, but the messaging was not all negative, she added.

“We expected to primarily see violence: beheadings, executions and throwing homosexuals off the tallest building,” she said. “In fact, a good portion of the propaganda is positive messaging: inoculating children, treating the sick or feeding the poor.”

Not all children were used in equal measure, however. Local boys, recruited from orphanages and refugee camps, were more expendable than the photogenic foreign children. They were more likely to receive training and be thrown into combat on the frontlines, or deployed as suicide bombers.

Bloom’s research also suggests this increased in the wake of major battlefield losses as ISIS sought to substitute manpower shortages.

It’s not just ISIS; however, tactical and strategic use of children has become pervasive throughout the war-ravaged region.

“Every organization in Syria is exploiting children on the front line, including ones that are receiving U.S. support,” Bloom emphasized. “There are no good guys in Syria.”

This begets a deeper question as the U.S. and the world turn to the prospect of regional peace with the impending demise of ISIS.

“We’re also trying to get a grip on the fact that, as we are now entering into a post-caliphate world, what do we do with the kids?” she asked. “Do we repatriate them? Are they responsible for their actions? How do we know what kid did what? We are facing a number of challenges.”

Bloom’s presentation and subsequent dialogue provided a window into an issue of direct relevance to the NPS students and faculty in attendance.

“There is a difference between reading her articles and actually getting to talk with her,” she said. “It was incredibly interesting.”

Erickson will soon return to sea to fulfil her Surface Warfare commitment, but intends to pursue area specialization in her career.

Bloom’s research will be published this year in her forthcoming book “Small Arms: Children and Terror” (Cornell, 2018).

Bloom’s presentation was the latest of the Global Connections Speaker Series held by NPS’ Department of National Security Affairs and funded by the NPS Foundation. Since 2015, the monthly series has sought to engage students and faculty in meaningful conversations with experts in international relations to gain insight into the latest research and developments in the field and, most importantly, provide NPS students with relevant knowledge to complement their studies and future careers.