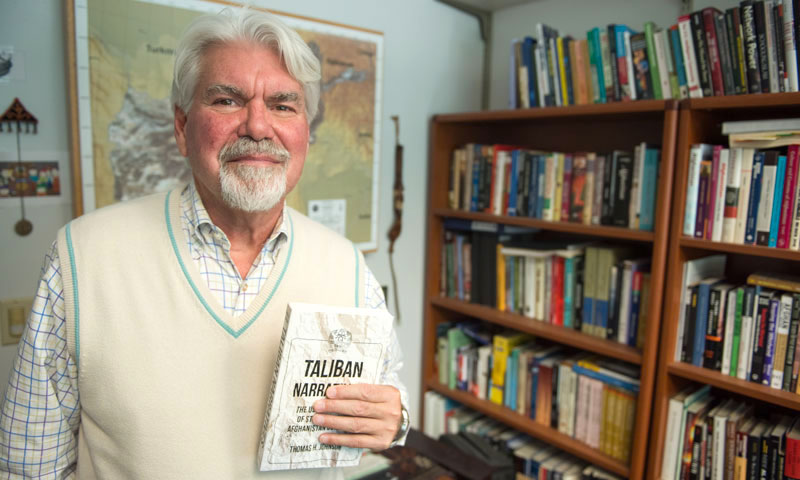 Dr. Thomas H. Johnson, Associate Research Professor in the NPS Department of National Security Affairs, released his latest book, “Taliban Narratives: The Use and Power of Stories in the Afghanistan Conflict.” Johnson’s work focuses on the powerful role of words and narratives in Afghanistan’s history of conflict.

“The Taliban not only have stories, but they relate to the people in their collective memory,” he continued. “They have been invaded by all the great powers of the world, be it British, the Soviets or the United States, and in every instance, we have defeated them. The Americans and their supporters are here to destroy our way of life and replace it with Christianity, they say.

“And they go on and on with these types of tropes. We know they aren’t true, but they resonate to the Afghan people that have a collective memory,” Johnson stressed.

Johnson has been traveling to Afghanistan on a yearly basis since 2005 and says this book is a result of his extensive field research and writing. Through this research and his direct connection to the U.S. military as an instructor at NPS, Johnson began developing the book’s premise that the War in Afghanistan, being a war of words, was doomed to fail from the start and is now in a perilous position.

Johnson continued by describing the differences between the approach to developing narratives that the United States and the Taliban each took, and how understanding the audience and connecting with them effectively was an advantage the Taliban had in winning this conflict.

“Afghanistan is basically in the rural areas, and is primarily an illiterate society. Since our invasion the literacy rate has grown dramatically, but still in key critical Taliban areas in the south you might have one percent female literacy and five percent male literacy,” said Johnson. “But there is always one villager that can read, so what the Taliban would do is a concept called Shabnameh or night letters. They would go in the middle of the night and post a letter on the village mosque or on the door of the village messenger. They would wake up and find this and the literate people would read this to the rest of the community. This would include what the Taliban wanted to do, or it would often be threatening, if you were working with the regime stop now because we know where you live.”

Johnson also has a chapter in his book dedicated to the chants and poetry of the Taliban. “That’s why their leaders are called warrior poets,” he said.

“Our stories and narratives do not resonate with the Afghan people, and some of our narratives have even been counterproductive,” Johnson said, comparing the United States efforts to the Taliban’s. “For example, we are here to liberate not only the Afghan men but also the Afghan women. For us to go into a country where women have held a particular place in society for a millennia and for that to change overnight was very problematic.

“Later we gave up on stories, I believe because we got too lazy to try and uncover the multilayered aspects of Afghan society and culture, and develop stories and narratives that would make sense to the Afghan people,” added Johnson.

Johnson has developed a new class for the Defense Analysis program at NPS on the subject of narratives and conflict, and how to properly develop a counter narrative.

“NPS is a perfect area to project some of the thoughts I have in this because we encourage our students to think outside of the box,” Johnson said. “When you start to think about information operations, you have to think outside of the box. You have to start to deal with things you aren’t trained in doing. Now we have sophisticated psychological operations and information training, but to go where I want to go with this relative to Afghanistan it meant to understand the nuances of Afghan culture and I think we were too lazy and didn’t do that.

“I think that if you buy my premise that most intrastate conflicts since WWII were basically wars of narratives, we have to take this very seriously and learn how to develop the types of stories that we want to do.” he added.