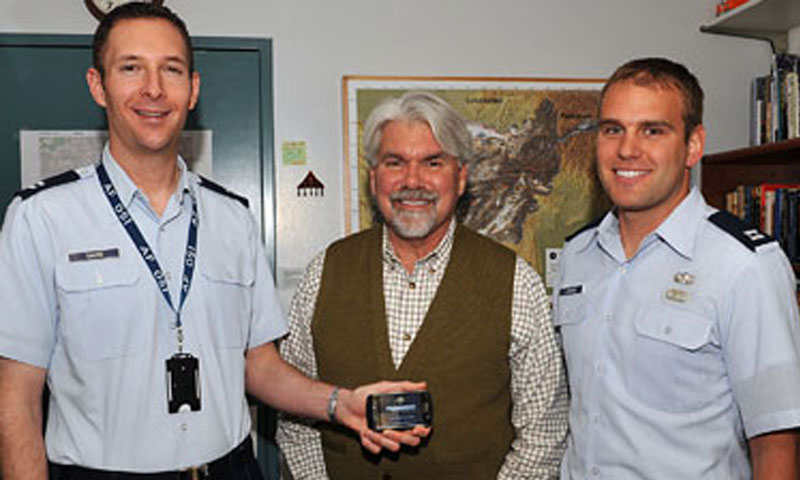 While smart phone apps can put a map in your hands, two Naval Postgraduate School students have designed one that puts a whole country in your hands – Afghanistan.

Professor Johnson gave the students the option of conducting research and writing the new software application in lieu of the usual research paper for a course he teaches on contemporary Afghan politics, and Davis and Joers jumped at the opportunity.

“As a result of extensive travels in Afghanistan and briefings with top military commanders, I became aware of the urgent need to make [Program for Culture and Conflict Studies] -created data widely available to military personnel in undeveloped regions and nonurban conflict zones where there’s typically either no or limited Internet access,” Johnson said. “We call the solution MobileAfghanistan – or MobiAFG for short – because it’s the mobile, off-line version of our CCS Web site. Like the Web site, it aggregates important data with geospatial maps and analyses in a 21st Century electronic gazetteer streamlining open-source data about this critical country, its people and leaders to in-theater warfighters.”

“MobiAFG is kind of like a CliffsNotes for Afghanistan,” said Davis. “It gives you instant access to condensed information about the country any time, any where, 24/7/365, in the palm of your hand. All you need is a BlackBerry with the application downloaded, and a battery, and anything you want or need to know is at your finger tips.”

The compact, easy-to-use off-line app contains detailed files on all of Afghanistan’s provinces, including geographical, human terrain and poppy cultivation maps; leadership and presidential candidate profiles; tribal and clan genealogies, divisions and histories; economic, cultural and political development analyses; and a security incidents database, among many others.

“I’ve served in Afghanistan with the Strategic Counterintelligence Directorate, where we had over 100 field missions outside of Kabul over a six-month period, and if I had this then, it would have been of tremendous value,” Joers said. “So it’s really exciting to see our efforts culminate in something we know our fellow warriors will find extremely useful. And not just useful –someday, this is going to save a lot of lives.”

“The main goal was to get the best unclassified information, fast, to our people in the field,” Davis added, “and it feels really great to have turned that vision into a reality.”

“The idea was to leverage the increasing popularity of using cell phones for text data by today’s tech-savvy warfigthers,” Davis noted. “We’ve heard that higher-ups think it’s great because it teaches people that BlackBerries are for more than just telephone and e-mail.” [A recent Pew Research Center study actually found that in 2009 the amount of text, e-mail, streaming and other non-voice data carried on mobile devices surpassed the amount of cell phone call voice data for the first time in the U.S.].

“A major part of the project was to find an efficient way to convert the Web site’s PDF files into a JPEG image format suited to the application,” Joers explained. “We spent 150 hours above and beyond our class work doing the research, converting more than 500 PDFs into JPEGs and optimizing the pages for display on a BlackBerry screen.”

Davis and Joers provided a hypothetical scenario to illustrate how MobiAFGs might be used in the field. An Air Force Captain deployed to International Security Assistance Force headquarters in Kabul is redirected to Camp Leatherneck in Helmand Province where there is no Internet access and needs quick information on the tribal personalities and alliances in the region to accomplish his mission. He pulls out his BlackBerry with the app downloaded and selects Provincial Overview, Southern Afghanistan, and Helmand for a tribal map and in-depth human terrain analysis of the area.

“The real story here is that a couple of Air Force captains with a lot of initiative, grit and hard work pulled off in a fraction of the time and for a fraction of the money, what would have cost hundreds of thousands of dollars for a contractor to come up with anything comparable,” Johnson said. “What they’ve accomplished is commendable, and is representative of the kind of students we have at NPS.”

“I think Professor Johnson was blown away when we pulled it off, and I’m amazed we were able to do it, too, especially as we had only one quarter,” said Davis.

“All the stars really aligned for this project,” Davis noted. “I concentrated on the programming and Chris really got into the content editing and reformatting the Web pages. And all along we had incredible support from Professor Johnson, who’s one of the world’s foremost authorities on Afghanistan. It’s really great he gave us the freedom to follow an extraordinary project like this and approach it in the way we wanted, right from the beginning. It’s been a lot of fun having three minds working together to create such a great product.”

“We also had incredible support from Research in Motion [RIM], the company that makes the BlackBerry,” Davis added. “Being able to test the application in real time on physical BlackBerries, which RIM provided, was critical to ensuring that the program would display properly and be easy to use operationally on the ground. They’ve already shown it to the Chief Information Officers of the Secretary of Defense and Secretary of the Navy, and displayed it at mobile device conferences.” 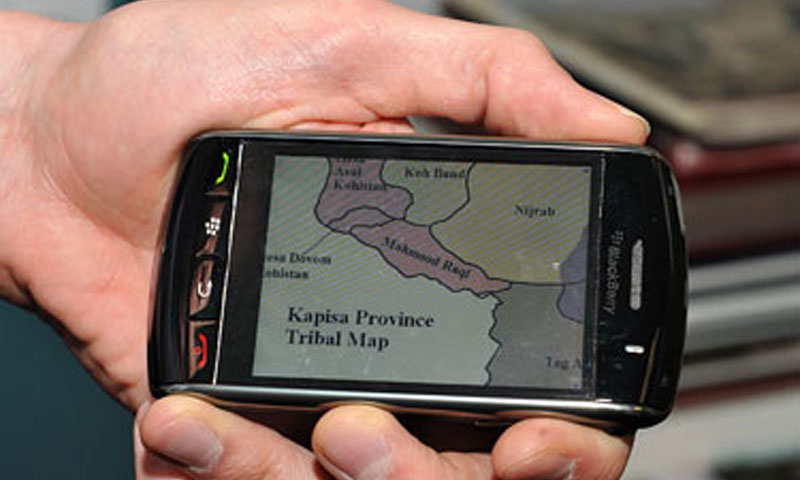 A BlackBerry running the “MobiAFG” application displays a tribal map of Kapisa Province in Afghanistan.

The students are currently doing a directed study with Johnson extending the Afghanistan, Pakistan and Central Asia apps beyond the BlackBerry to the iPhone, iPod Touch, iPad and other mobile platforms, which they hope to be available by June.

“By supporting a multitude of mobile platforms, we’re ensuring the largest number and widest possible range of warfighters can get access to this data resource,” Davis said.

“Eventually, we’d like to see MobiAFG as a standard application preloaded on each BlackBerry device that military members receive,” Joers added. “And BlackBerries are really popular with DoD. I understand the Pentagon has purchased something like 600,000 of them.”

While the team seeks to expand the number of platforms MobiAFG can be used on, also critical to the effort’s success is ensuring the data is as current and up-to-date as possible. Professor Johnson and his team are currently seeking the external funding required to facilitate this update.

Davis is a student in the Air Force Institute of Technology (AFIT)-sponsored master’s program in Middle Eastern Studies within NPS’ department of National Security Affairs (NSA). He served as an Air Force communications officer and completed NATO Staff Officer’s School before being selected for the service’s Office of Special Investigations (AFOSI). Prior to coming to NPS, he was assigned to AFOSI’s General Crimes Unit Detachment 518 in Spangdahlem, Germany. Davis earned a B.S. degree in computer science from Texas Christian University and a Master’s in Business Administration/Information Technology Management from Touro University International. He is an accomplished rifleman and the current Air Force record holder in both the 300-meter rapid-fire kneeling and 300-meter rapid-fire prone categories. In 2005, Davis became the first American and first non-Belgian to win the prestigious Belgian Master of Flanders men’s prone shooting championship series.

After graduating from NPS, Davis and Joers both report to the Defense Language Institute, where Davis will study Arabic and Joers Turkish.

The NPS Center for Culture and Conflict Studies is dedicated to the study of anthropological, ethnographic, social, political and economic data to inform U.S. policies at both the strategic and operational levels. Its mission is premised on the belief that the U.S. must understand the cultures and societies of the world to effectively interact with the local peoples.