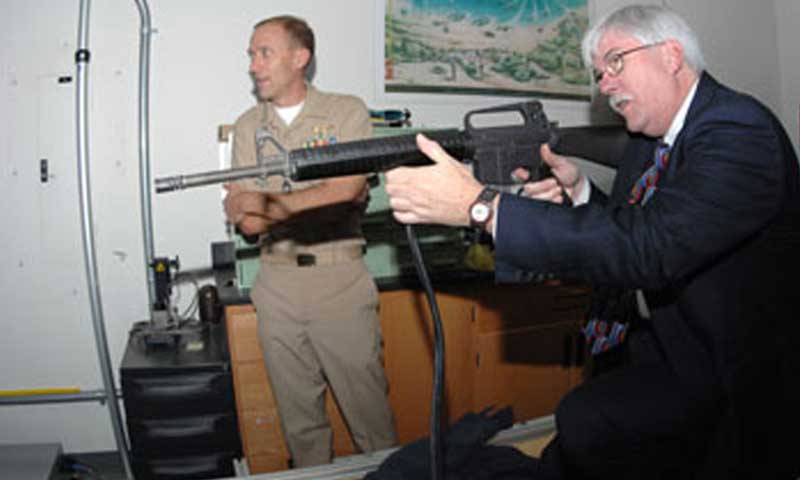 As ONR's senior civilian manager, Jones provides executive, technical and scientific direction for the agency's mission of planning and managing advanced science and technology research for the Department of the Navy.

Here at the behest of the Cebrowski Institute For Innovation and Information Superiority, the Navy's top science and technology innovator was introduced by Professor Dan Boger, Interim Dean of Research, Chairman of the Department of Information Sciences and Executive Director of the National Security Institute.

"This is my third visit to NPS within the year I've been with ONR, and every time I see something important and interesting," he told the students."You're very lucky to be here. This is a wonderful place and a critical part of the Navy's Science and Technology Enterprise."

Jones noted the longstanding and mutually beneficial relationship between the Office of Naval Research and the Naval Postgraduate School.

"That should be a lesson for NPS faculty," Jones quipped. "Be nice to your students, because you never know when one of them will become the Director of the Office of Naval Research.

"When you leave here, remember that you're our ambassadors and our S&T eyes and ears out in the fleet and the services," Jones stressed to the assembled students. "If you see a problem in the field you think has an S&T solution, or have a great idea for what Admiral Roughhead calls 'the next big thing,' let us know. Get in touch through one of our ONR field offices, which are throughout the world. We need all of your continuing inputs to be the destination for the innovative ideas that enable us to sustain the cutting edge."

As for the future, the ONR Director encouraged students to consider a tour at his agency. "If you have an opportunity to work with ONR, it's also a great place to be," he said. "I promise if you do, you'll have a great time while making lasting contributions to Navy S&T.

"I'm very excited about the caliber of students and the fundamental game-changing research that's going on here at NPS -- for example on the electromagnetic railgun, immersive individual combatant training, autonomous unmanned systems and the free electron laser [FEL]," Jones said in an interview after the lecture. "And we at ONR helped you get the Stanford [University] FEL that will enable that work to be taken to the next level."

"You don't usually get such interest and response from a high-level director," said Meissner. "It's really encouraging and refreshing to have that coming from ONR."

"It was important for him to see these NPS-ONR collaborative points," said Director of ONR's Corporate Strategic Communications Office David Nystrom, who is a research associate with the Cebrowski Institute."Among the programs he was able to be briefed on and interact with were the advanced computational facilities and the MOVES [Modeling, Virtual Environments and Simulation] motion platform and indoor simulator marksmanship trainer [see photo]."