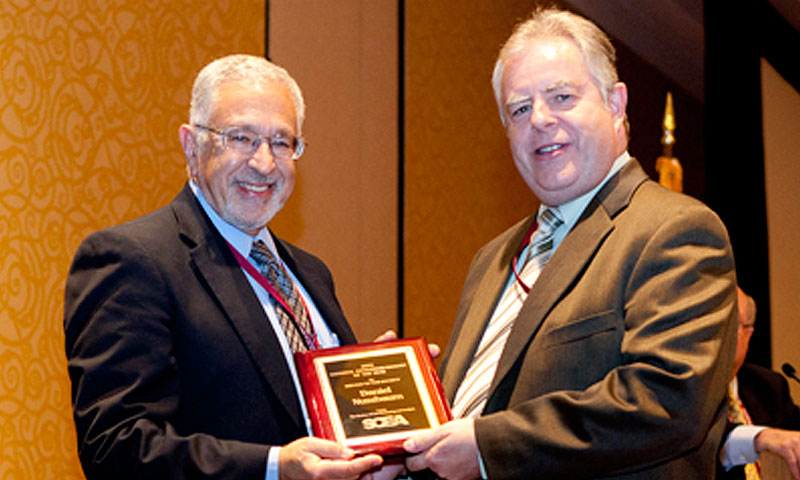 “I’ve been a member of SCEA for a long time,” said Nussbaum. “It’s really gratifying to receive this award.”

At NPS, Nussbaum has been instrumental to the development of cost estimation programs such as the new Distance Learning Master’s Degree in Cost Estimating and Analysis (MCEA) program that started earlier this year. The program, developed in collaboration with the Air Force Institute of Technology (AFIT), has the distinction of being the only distance learning master’s in cost estimation program in the world.

In his nomination letter, Nussbaum was recognized as a significantly outstanding SCEA member that fit the requirements for the award. He has held several leadership roles in the society since its formation in 1991, serving as Director, Vice President, President and Past President as well as being active in the SCEA predecessor societies, such as the Institute for Cost Analysis (ICA) and the National Estimating Society (NES). In short, the letter notes Nussbaum’s contributions and commitments to the society have helped it solidify into the organization it is today.

Nussbaum said that cost estimating has become more important since the government passed the Weapon Systems Acquisition Reform Act (WSARA) in 2009. In that year, Nussbaum testified before congress about the importance of cost estimation in respect to this act.

“All my experiences in cost estimating confirm that three things are necessary for sound cost estimating,” said Nussbaum in his statement to the committee. “They are 1) Acceptance of the underlying uncertainties in predicting the future, 2) Accurate and plentiful historical data, and 3) Professionally trained and certified personnel.”

He noted that members of SCEA comprise approximately one-third of all cost estimators supporting DoD and that the SCEA is a central and indispensable player in the training, initial certification and periodic recertification of cost estimators. This, in conjunction with the degree programs that the NPS provides, makes a better base for the DoD’s goals in cost estimation, concluded Nussbaum.

“SCEA provides a body of knowledge in cost estimating to all of the government and commercial world,” said Nussbaum. “NPS has the only distance learning master’s program in cost estimating in the world … and this is really a great thing.”

The SCEA is a non-profit organization that strives to improve cost estimating and analysis in the commercial and government sectors by capacitating and training their individual professional members and making them more competent in today’s ever evolving economic environment.

The Service to the Society National Award recognizes members that have made significant contributions to the promotion, growth, development and overall improvement of the SCEA and its members. Nominations are submitted to the society 60 days before they are presented at their annual national conference.